The Watergate scandal may have been rooted in Richard Nixon’s alleged efforts to sabotage the 1968 Paris peace talks, but this story has never fully been told – partly because the Washington Post remained silent on it, explains Garrick Alder.

Stephen Spielberg’s film The Post is still running in theaters, lauding the Washington Post, Katharine Graham and Ben Bradlee as fearless exposers of official secrets about government wrongdoing. But previously overlooked evidence now reveals for the first time how the Washington Post missed the most serious leak in newspaper history, and as a result history itself took a serious wrong turn. Consequently, this is a story that was also missed by Spielberg, and missed by Alan Pakula in his 1976 film about The Washington Post’s role in Watergate, All The President’s Men. 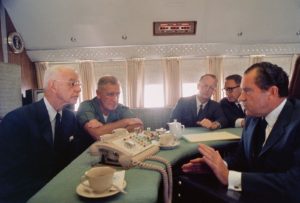 Standing behind the bar aboard Air Force One, President Richard Nixon speaks with military and civilian leaders while flying from Bangkok to Saigon for a short visit with commanders and troops stationed in Vietnam.

Spielberg’s 2018 film tells the story of the “Pentagon Papers” affair of 1971, in which a huge number of Defense Department documents were leaked by RAND Corporation employee Daniel Ellsberg, whose conscience would not allow him to stay silent about the carnage in Vietnam. The Washington Post took on Richard Nixon and won – a victory for press freedom that has been enshrined in the mythos of the mass media. But in fact, the Washington Post had inadvertently let Nixon off the hook.

The newspaper had been told by an unbeatable source – one might almost say, an “unimpeachable” source – that the president had committed treason against America in time of war and had then conspired to destroy the damning evidence of his own crime. It is no exaggeration to say that if the Washington Post had printed what it had been told, simmering domestic discontent over the Vietnam War would have become an incendiary mix with national disgust over Nixon’s conduct in office.

At the height of the Watergate scandal, in summer 1974, Secretary of State Henry Kissinger tried to tell the world about Nixon’s sabotage of the 1968 Paris peace talks, talks which – had they succeeded – could have spared the nation six more years of futile slaughter. Nixon would have gone down with the blame for Vietnam squarely on his shoulders – ultimately, perhaps, providing America with much-needed catharsis. Kissinger leaked his knowledge of Nixon’s treason to Washington Post reporter Bob Woodward. Woodward fumbled the pass and no story ever appeared.

The first trace of desperation is recorded on the White House tape of June 17, 1971, just four days after the first newspaper story about the Pentagon Papers (in the New York Times). Nixon is heard telling White House chief of staff HR Haldeman: “God damn it, get in and get those files. Blow the safe and get them.” Nixon’s aides were used to occasionally turning a deaf ear to their boss’s more outrageous orders.

In a July 24, 1974 memorandum, Woodward set out what he could recall of an interview with Nixon aide John Ehrlichman, in which the Brookings break-in was discussed:

At president’s direction E[hrlichman] said he talked to Brookings and about secrecy there; did it several times; right after Pentagon Papers. Also about Brookings a meeting in San Clemente about 12 July 71 ‘undoubtedly discussed it’ (w/ Dean) the discussions were an effort to get the so-called “bombing halt” papers back.

The “bombing halt papers” were what Nixon told his cronies he wanted to retrieve – evidence that his predecessor Lyndon Johnson had stopped bombing in Vietnam in a last-minute attempt to swing the 1968 election to the Democratic Party. But this was just another Nixon lie to conceal his true motivations, and Ehrlichman essentially admitted as much to Bob Woodward during the same interview, when describing his attempts to access the Brookings Institute’s Vietnam records via official bureaucratic channels: “Buzhardt decided what we not get to see [sic] So it was admittedly a hit and miss process. … in terms of ? what he got to see; not the whole story; but the Brookings matter was not necessarily what he was looking for. Wouldn’t elaborate on that.” (emphasis added)

Filed in the Woodward-Bernstein collection at the University of Texas, among the July 24, 1974 Ehrlichman interview notes, is a second typed memorandum from Woodward, addressed to his colleague Carl Bernstein. Its significance has been overlooked for nearly 45 years. The memo is undated,  but, from part of its contents, its creation can be pinned down to a period of approximately 35 days at the height of the Watergate scandal, immediately prior to July 24, 1974 when the Supreme Court ordered Nixon to hand over the White House tapes.

Woodward’s memo begins: “First and most important, my source said that the President personally ordered the break-in at Brookings.” This was correct, although the tapes of Nixon’s orders were at this stage still in the sole possession of the White House.

Woodward’s source knew what he was talking about. After some discussion about how Charles Colson had reacted to the President’s order to burgle the Brookings Institute, when other aides had just ignored what they regarded as another of Nixon’s impetuous outbursts, Woodward got to the point of his source’s information:

“I quizzed him for a while, and while I don’t remember exactly what he answered in each instance, the impression left was that these papers related to secret U.S. negotiations with Hanoi, Russia and China. The ‘Other stuff,’ my source said, really provided the impetus for the administration’s panic reaction to the Pentagon Papers, not the Pentagon Papers themselves.” (emphases added)

Woodward’s notes state that his source told him “several times that the picture the public had of [Pentagon Papers leaker Daniel] Ellsberg was still distorted … all he would hint at was that Ellsberg’s activities were very questionable.”

He also mentioned to Woodward the supposed existence of “material that the [Nixon] administration had gathered about Ellsberg’s behavior while in Vietnam.” This corresponds closely with claims that had been made in the White House soon after Daniel Ellsberg’s leak of the Pentagon Papers had been published.

In his 2000 tell-all biography, The Arrogance of Power: The Secret World of Richard Nixon, Anthony Summers wrote: “Kissinger, who knew Ellsberg, fed the president’s spleen with a torrent of allegations. Ellsberg may have been ‘the brightest student I ever had,’ he told Nixon, but he was ‘a little unbalanced.’ He supposedly ‘had weird sexual habits, used drugs,’ and, in Vietnam, had ‘enjoyed helicopter flights in which he would take potshots at the Vietnamese below.’ Ellsberg had married a millionaire’s daughter and – Kissinger threw in for good measure – had sex with her in front of their children.”

Other information known to Woodward’s source included the existence of “a document – he gave the number as NSSCM 113 on declassification. We did not get further than that.” It is somewhat surprising that Woodward was able to recall the number of this document so exactly, when his recollection of the nature of the papers Nixon wanted from Brookings was so hazy. The document Woodward’s source was directing him toward was NSSM 113 (just one letter different; NSSM standing for “National Security Study Memorandum”). Dated January 15, 1971, NSSM 113 was titled “Procedures for Declassification and Release of Official Documents” and was written by Henry Kissinger.

Finally, Woodward mentions that “My source also confirmed that Kissinger was for a unit to plug security leaks” (i.e., that Kissinger had supported the formation of Nixon’s “plumbers” team).

There could only be a very small number of White House figures privy to this precise set of information in mid-1974, and perhaps only one. Woodward’s source was Nixon’s National Security Advisor and Secretary of State, Henry Kissinger. Still alive in 2018, Kissinger has maintained public silence about his knowledge of Nixon’s Vietnam treason for half a century.

It is incomprehensible that neither Woodward nor Bernstein appeared to understand the information they were being told by Kissinger: the allegations against Nixon had swirled ever since he won the Presidency. On January 12, 1969, the Washington Post itself had carried a profile of Nixon’s go-between, Anna Chennault, which stated: “She reportedly encouraged Saigon to ‘delay’ in joining the Paris peace talks in hopes of getting a better deal if the Republicans won the White House.” Chennault was reported as making no comment on the allegations, which were entirely accurate.

Woodward and Bernstein had been handed the skeleton key that would have unlocked the entire Watergate affair. The reporters had been told – by no less a figure than Nixon’s National Security Advisor, Henry Kissinger – about the real motive behind Nixon’s plan to burgle the Brookings Institute. It was to destroy the evidence that Nixon had conspired to prolong a war with an official enemy of the United States in order to win the presidency in 1968; after which he deliberately prolonged – even escalated – the Vietnam War. And – for reasons that might never be known – Woodward and Bernstein stayed silent.

Bob Woodward and Henry Kissinger were contacted for comment on the specific disclosures made in this article. Neither of them replied.

This is an abridgement of an article first published by Lobster Magazine (www.lobster-magazine.co.uk). Republished with permission. All rights reserved by the author.

← America’s Election Meddling Would Indeed Justify Other Countries Retaliating In Kind
U.S. Empire Still Incoherent After All These Years →