As the Russia-gate hysteria expands, it is coming to resemble the McCarthyism of the 1950s, except this time liberals and progressives are promoting the insidious “guilt by association,” as Michael Milillo describes.

Does the American government requiring “RT America” — a Russian news organization — to register as a foreign agent under the Foreign Agents Registration Act (FARA) constitute censorship by the government? 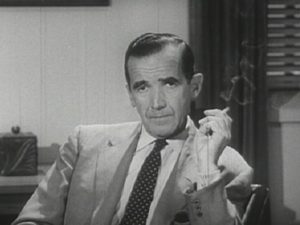 If registration in this context is NOT censorship as many latter-day “liberal” McCarthyites contend, then Americans should NOT be afraid to appear on “RT America” as commentators presenting their opinions which may be different from the current narratives that are being propagated by the mainstream media across the United States.

But Americans will be afraid to appear due to “Guilt by Association,” which in its current form is being used to suggest that any Russian who happens to be attending the same social event as President Trump is therefore proof that Trump is a Russian collaborator. Thus, by extrapolation, “Guilt by Association” will be used to denounce any American who appears on “RT America” and presents a narrative that conflicts with the narrative being broadcast by the mainstream media.

The mainstream media will immediately indict that American commentator as a “Russian agent” – or at least that will be the reasonable fear – and thus other Americans will be prevented from listening to and/or reading these alternative opinions – and that amounts to censorship.

Some mainstream media outlets have already censored stories when the analyses conflict with the current liberal narrative for what caused Hillary Clinton to lose to Donald Trump in the November 2016 elections. That narrative is that Hillary Clinton was defeated due to the Russian government hacking into the computer servers at the Democratic National Committee, i.e., “Russia-gate.”

Some liberal web sites now are censoring material that conflicts with this Russia-gate narrative. Case in point is an article written by HuffPost’s contributor Joe Lauria entitled “On The Origins of Russia-gate.”

One day after Lauria posted his article on the “HuffPost” web site, the “HuffPost” editorial staff deleted — censored — the article, citing supposed factual errors. However, the editors did not attempt to contact Lauria before the deletion or to discuss with Lauria what facts he used in his article that were deemed false or misleading. His real offense appears to have been that the story raised doubts about the current narrative accepting the certainty of Russian “meddling” in the 2016 election.

Although some have argued that “HuffPost” has the right to censor material published on its web site, the “HuffPost” readers should NOT be involved in that determination (without at least the author getting a chance to provide a defense). That is censorship by “Mob Rule.”

To further explain what censorship looks like, watch the “70th Year Commemoration of the Hollywood Blacklist” on C-Span. The commemoration cites the statements or the testimonies of the “Blacklisted” entertainers who appeared before the “House Un-American Activities Committee” [HUAC] in 1947.

If today’s liberals are infuriated by the 1947 proceedings of HUAC and the McCarthyism that challenged the patriotism of Americans, then these liberals should NOT be in favor of today’s censorship either. What HUAC and McCarthyism did was to make Americans fearful of being called “Un-American” just because their opinions or politics were different from what either HUAC or Sen. Joseph R. McCarthy said they should be.

Beyond that, Americans came to shun neighbors, fellow workers, and acquaintances — in order to protect themselves from ending up on the “Blacklist” — because you didn’t know who might be accused or might be pressured to make accusations, such as the case of director Elia Kazan.

Is it because the BBC has accepted without question the dominant narratives of the U.S. mainstream media in the BBC’s reporting of the news? Unlike the BBC, “RT America” has allowed alternative opinions to be heard by its audience rather than stringently following the mainstream media’s narratives.

In 1953, Air Force regulation 35-62 stated, “A man may be regarded as a security risk if he has close and continuing associations with communists or people believed to have communist sympathies.”

Radulovich was an easy target because his father “subscribed to several Serbian newspapers, one of which was classified as Communist by the US government.” And as his sister supported liberal causes, she was declared to be a communist sympathizer.

With this “Guilt By Association” in mind, CBS correspondent Edward R. Murrow said, “We believe that the son shall not bear the iniquity of the father, even though that iniquity be proved, and in this case it was not.”

As an archive of Edward R. Murrow’s work noted, “Not only were the witch hunts affecting the military, Hollywood, government, and academia, this case proved that the average guy can be targeted.”

During the broadcast of “See It Now” on March 9, 1954 by CBS TV, Edward R. Murrow said: “We must not confuse dissent with disloyalty. We must remember always that accusation is not proof and that conviction depends upon evidence and due process of law. We will not walk in fear, one of another. We will not be driven by fear into an age of unreason, if we dig deep in our history and our doctrine, and remember that we are not descended from fearful men — not from men who feared to write, to speak, to associate and to defend causes that were, for the moment, unpopular.

“We can deny our heritage and our history, but we cannot escape responsibility for the result. There is no way for a citizen of a republic to abdicate his responsibilities. As a nation we have come into our full inheritance at a tender age. We proclaim ourselves, as indeed we are, the defenders of freedom, wherever it continues to exist in the world, but we cannot defend freedom abroad by deserting it at home.”

Putting what Murrow said into perspective as it relates to “RT America,” both the U.S. government and many liberals are now using the same tactic of “Guilt By Association” by insinuating that “RT America” is a Russian news organization and thus must be a puppet of the Russian government without providing any proof to support that accusation.

Murrow’s comment is just as relevant today as it was back in 1954. Perhaps even more so because liberals are supposed to be the good guys.

Michael Milillo, who lives in Pennsylvania, is a retiree with a background in accounting and finance.

← Honduras Again in the Balance
Cherry-picking Toward War with Iran →