Exclusive: At a key juncture of the Vietnam War, the Battle of Hue shocked Americans with scenes of brutal urban warfare, offering lessons that reverberate to the present, reflects Don North in reviewing a book by Mark Bowden.

The Battle of Hue in 1968 – the climactic clash of the Tet Offensive, which itself was the turning point of the Vietnam War – exploded the official lies from U.S. commanders about progress toward victory but also delivered a warning about the future costs if the conflict were continued indefinitely. 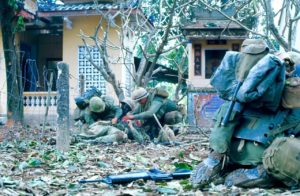 U.S. Marines try to save the life of a comrade hit by North Vietnamese AK-47 fire at the Citadel, Hue February 24th 1967. (Don North Photo)

In that sense, the Battle of Hue has resonance to America’s current “endless war” in Afghanistan and other military interventions in the nearly 16 years since 9/11, conflicts marked by bravery of soldiers on opposite sides as well as the arrogance and careerism of the top brass and feckless politicians.

As author Mark Bowden writes in his epilogue to his new book, Hue 1968, “Alternative history enthusiasts promote the preposterous idea that the U.S. might have won the war if it had thrown itself more heartily into the conflict. As some of the nation’s more recent wars have helped illustrate, ‘victory’ in Vietnam would have been neither possible nor desirable. It would have required a massive and sustained military presence, and a state of permanent war. Hue illustrates just how bitter that war would have been.”

Bowden, author of Blackhawk Down and 12 other books, was a 16-year-old high school student in Philadelphia on Jan. 3l, 1968, when the battle of Hue began. The attack was part of the Viet Cong and North Vietnamese Army (NVA) assault across South Vietnam at the start of the Tet holiday by an estimated 80,000 fighters. They achieved nearly total surprise in most areas, as they did in Hue, one of the most venerated places in Vietnam.

Hue’s population of 140,000 made it South Vietnam’s third largest city, with two-thirds of the population living within the walls of the old city known as the Citadel, three-square-miles surrounded by walls 20 feet high and 30 feet thick. Within the walls was yet another fortified enclave, the historic Imperial Palace, home of the Vietnamese emperors before the French took control in 1883.

A giant Viet Cong flag was raised over Hue’s Citadel and flew for 25 days while battalions of NVA occupied the Emperors Palace and other positions in the Citadel. Yet, this reality was denied and obscured by the top U.S. commander, General William Westmoreland, whom Bowden describes as inept and dishonest:

“General Westmoreland continually and falsely assured political leaders in Washington and the American public that the city had not fallen into enemy hands. This refusal to face facts had tragic consequences for many of the marines and soldiers who fought there. ‘Westy’ denied that his official casualty estimates [of enemy troops] were inflated and said the enemy’s offensive was a sign of desperation.

“He also wrote that many NVA and VC had fought ‘halfheartedly.’ To a man, American veterans I interviewed told me they had faced a disciplined, highly motivated, skilled and determined enemy. To characterize them otherwise is to diminish the accomplishment of those who drove them out of Hue.”

As an ABC News correspondent in Vietnam, I was personally aware of General Westmoreland’s fabrications starting with his announcement at a Saigon news conference on Jan. 31, that Hue had been recaptured and NVA soldiers forced out. 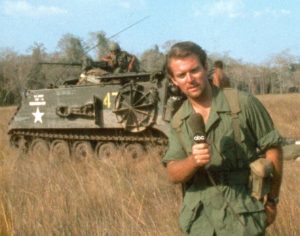 Later in February, I joined the U.S. Marines of 1st of the 5th battalion as they fought for ten days to advance the last 1,000 yards along the south wall of the Citadel. Bowden’s clear and vivid descriptions of the desperate daily combat brought back painful memories for me.

“The Battle of Hue is a microcosm of the entire conflict,” writes Bowden. “With nearly half a century of hindsight, Hue deserves to be widely remembered as the single bloodiest battle of the war, one of its defining events, and one of the most intense urban battles in American history.”

Despite Westmoreland’s spin, the Battle of Hue and the broader Tet Offensive had a powerful impact on President Lyndon Johnson and some of his top advisers. The intensity of the fighting exposed Westmoreland as an untrustworthy source of information, not just to the press and public but even in his secret communications with the White House.

Westmoreland’s analysis that the enemy attack on Hue was simply a feint to deflect from the fighting at Khe Sahn destroyed his reputation for accurate foresight. Washington lawyer Clark Clifford, replacing Robert McNamara as Secretary of Defense, was ready to reject Westmoreland’s unfailingly upbeat view of the war.

After the first two weeks of Hue fighting Clifford told President Johnson, “On one hand the military has said we had quite a victory out there … on the other hand, they now say it was such a big victory that we need one hundred and twenty thousand more men.”

Shortly after Clifford’s assignment to be Secretary of Defense, Westmoreland’s request for over 100,000 more troops was denied and the General was relieved of command.

“Both sides miscalculated,” writes Bowden. “Hanoi counted on a popular uprising that didn’t come, while Washington, blindsided, refused to believe the truth. The armies on both sides played their roles courageously and to terrible effect. The battle’s clearest losers were the citizens of Hue. The systematic executions of Hue citizens suspected of Saigon sympathies are today denied and are an inconvenient memory for the ruling Communist party of Vietnam.”

Bowden quotes civilian casualty estimates of 4,856 by the Saigon government. He cites the American scholar Douglas Pike who studied the mass graves immediately after the fighting, as being likely closest to the truth with a count of 2,800. Total number of Hue civilians killed by U.S. bombing, crossfire between the two forces, and the executions is recognized as 5,800.

An estimated 80 percent of Hue structures were either destroyed or heavily damaged. A total of 250 American soldiers and Marines were killed and 1,554 wounded. South Vietnamese government troop casualties were put at 458 killed and 2,700 wounded. The Vietcong losses were estimated at between 2,400 and 5,000. The final toll of 25 days of fighting numbers well over 10,000 making it the bloodiest battle of the Vietnam War.

Another consequence of the Tet Offensive was the growing hostility among pro-war Americans toward on-scene journalists who described the U.S. military setbacks and contradicted the upbeat assessments from Westmoreland and the military brass, leading to a narrative blaming the press corps for losing Vietnam. 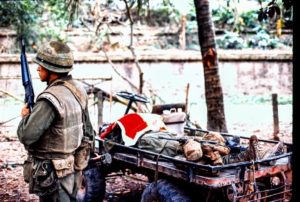 A U.S. Marine casualty lies on a “mule” trasport vehicle under a Bhudist flag awaiting removal from front lines at Hue on Feb. 24, 1968. (Don North photo)

But Bowden disagrees with this complaint, writing: “Journalism has long been blamed for losing the war, but the American reporting from Hue was more accurate than official accounts, deeply respectful, and uniformly sympathetic to US fighting men.”

Instead, Bowden is critical of U.S. military leadership in Hue and documents many examples of bad tactics and particularly misjudging the efficiency of the NVA by sending under-strength units to engage large and entrenched enemy forces.

Bowden’s disdain for senior officers in the battle is at odds with his admiration for the “grunts” on both sides.

“I was moved by the heroism and dedication of those who fought on both sides of the battle,” writes Bowden. “In the worst days of this fight, facing the near certainty of death or severe bodily harm, those caught up in the Battle of Hue repeatedly advanced. Many of those who survived are still paying for it. To me the way they were used, particularly the way their idealism and loyalty was exploited by leaders who themselves had lost faith in the effort, is a stunning betrayal. It is a lasting American tragedy and disgrace.”

Many other books and analyses of the battle have celebrated the valor of U.S. troops while showing little interest in how they were used.

“The conspiracy of denial also explains why this terrible battle has remained, for most Americans, so little known,” writes Bowden. “It has been conscientiously remembered by the US Marine Corps, albeit with more emphasis on the glory than on the leadership blunders that cost so many lives.”

Bowden’s book also may have put to rest fears that history must be written by those who experienced it. In five years of diligent in-depth research, thousands of interviews on both sides of the battle and an ability to analyze his research in terms of what each day’s events meant for the entire war, Bowden has produced a book critics say is the best understanding of the Battle of Hue and its effect on the war.

Some historians say the sweet spot for understanding an historical event is about 50 years – enough time for a measure of perspective, yet while there are still living eyewitnesses. Since the now-unified Vietnam is welcoming Americans, it also was possible for Bowden for the first time to report the battle from both sides. 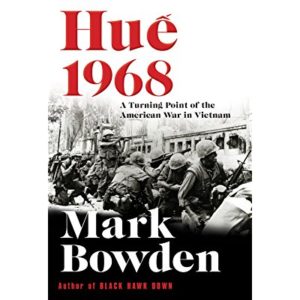 “Most American veterans were pleased to share their experiences with me,” says Bowden. “The sheer number of interviews gave me multiple perspectives on nearly every event described. I am indebted to previous accounts, Battle for Hue by Keith Nolan; Fire in the Streets by Eric Hammel; The Lost Battalion by Charles Krohn; The Siege of Hue by George Smith; and The Cat from Hue by Jack Lawrence.”

Bowden says he learned a great deal from journalist’s reports written at the time and even more from talking to reporters and photographers who produced them, particularly Gene Roberts, John Olson, and Mike Morrow.

Bowden lists several viewpoints shared by the hundreds of American veterans he interviewed: most were proud of having served; nearly all were angry over the betrayal of their youthful idealism, mostly at American leaders who sent them to fight a war that was judged unwinnable from the start; all felt sorrow for the friends they lost and the horror the war inflicted on everyone involved; many described their difficulties in adjusting to normal life after returning home.

There are also lessons for the present and the future. Urban warfare has become more common since the Battle of Hue as more of the world’s population leaves rural areas. Although untrained in urban warfare, the U.S. Marines — dispatched to reclaim Hue — soon adapted from the jungles and paddies they were used to in Vietnam.

Bowden describes in graphic detail the tactics of avoiding booby-trapped doors and instead smashing through the sides of buildings, clearing room to room, staying off the streets and open areas, hard lessons of the fighting in Hue that the U.S. Marines brought to Iraq in 2004 when they assaulted the city of Fallujah twice.

Today, with U.S.-backed forces battling ISIS militants in Mosul, Iraq, and Raqqah, Syria, the bloody lessons of Hue — and memories of the severe civilian casualties — are relevant again.

69 comments for “Grim Lessons from a Faraway War”