Exclusive: The U.S. mainstream media insists it just wants “truth” algorithms to purge “fake news” from the Internet, but the real goal seems to be restoring public “trust” by limiting what the people get to see, reports Robert Parry.

There’s been a lot of self-righteous talk about “truth” recently, especially from the people at The New York Times, The Washington Post and the rest of the mainstream news media. They understandably criticize President Trump for his casual relationship with reality and happily dream about how nice it would be if they could develop algorithms to purge the Internet of what they call “fake news.” 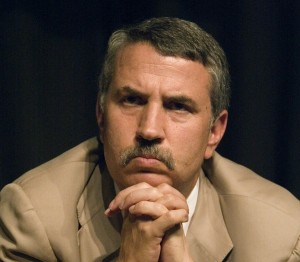 But these “truth-loving” pundits, the likes of star Times columnist Thomas L. Friedman, never seem to reflect on their own responsibility for disseminating devastating “fake news,” such as the falsehoods about Iraq’s WMD, lies that led to the deaths of hundreds of thousands of Iraqis and thousands of American soldiers and spread horrific chaos across the Mideast and into Europe.

Nor does that Iraq experience ever cause Friedman and his fellow pundits to question other Official Narratives, including those relating to the proxy war in Syria or the civil war in Ukraine or the New Cold War with Russia. Meanwhile those of us who ask for substantiating facts or observe that some official claims don’t make sense are subjected to insults as fill-in-the-blank “apologists” or “stooges.”

It seems that any deviation from Officialdom’s pronouncements makes you an enemy of “truth” because “truth” is what the Establishment says is “truth.” And, if you don’t believe me, I refer you to Friedman’s Wednesday’s column.

Friedman leads off the article by quoting himself telling a questioner at a Montreal conference: “I fear we’re seeing the end of ‘truth’.”

But Friedman doesn’t take himself to task by noting how he helped disseminate the Iraq WMD lies and how he flacked for that illegal and disastrous war for years.

If he had ‘fessed up, maybe Friedman could then have explained why he didn’t resign in disgrace and engage in some lifelong penance, preferably including a vow of silence, rather than continuing to spout lots of other nonsense while also continuing to collect a handsome salary and to rack up lucrative speaking fees.

Instead, after wringing his hands over why Americans no longer trust their leaders, Friedman cites another voice of authority, a friend and mentor, Dov Seidman, who complains that “What we’re experiencing is an assault on the very foundations of our society and democracy – the twin pillars of truth and trust. …

“What makes us Americans is that we signed up to have a relationship with ideals that are greater than us and with truths that we agreed were so self-evident they would be the foundation of our shared journey toward a more perfect union – and of respectful disagreement along the way. We also agreed that the source of legitimate authority to govern would come from ‘We the people’.”

Friedman then goes on to share Seidman’s lament that when “we” no longer share basic truths “then there is no legitimate authority and no unifying basis for our continued association.”

Friedman identifies the villains in this scenario as “social networks and cyberhacking,” which help “extremists to spread vitriol and fake news at a speed and breadth we have never seen before.” So, it seems those “truth” algorithms can’t arrive soon enough.

However, if you keep reading Friedman’s column, you learn that the real problem is not that “cyberhacking” is generating “fake news,” but rather that it has let Americans see too many ugly truths about their leadership, as happened when WikiLeaks published emails showing how the Democratic National Committee unethically tilted the playing field against Sen. Bernie Sanders; how Hillary Clinton pandered to Goldman Sachs in return for lucrative speaking fees; and how the Clinton Foundation engaged in pay-to-play with rich foreigners.

Friedman’s column acknowledges as much, again citing Seidman: “Social networks and hacking also ‘have enabled us to see, in full color, into the innermost workings of every institution and into the attitudes of those who run them,’ noted Seidman, ‘and that has eroded trust in virtually every institution, and the authority of many leaders, because people don’t like what they see’.”

In other words, the answer to restoring “trust” and to respecting “truth” is to hide ugly realities from the unwashed public. If the people are shielded from the facts, the Establishment will regain its control over “truth” and thus win back the people’s “trust.”

If all this seems upside-down to you – if you think that the real answer is for America’s leaders to behave more responsibly, to let the public in on the real “truth,” and thus to make the people’s “trust” mean something – you must be a “Kremlin stooge.” After all, the current groupthink is that the diabolical Russians slipped WikiLeaks those Democratic emails in a nefarious plot to undermine Americans’ faith in their democracy.

However, if you’re still having trouble with Friedman’s logic, you also must not understand how America’s new media paradigm works. The job of the media is not to provide as much meaningful information as possible to the people so they can exercise their free judgment; it is to package certain information in a way to guide the people to a preferred conclusion.

You see the last thing that Friedman really wants is for the American people to understand their own reality – the good, the bad and the ugly. Instead, we are to have our pretty little heads filled with pleasant myths that make us feel special as we are herded either to the shearing shed or to the slaughterhouse.

For instance, reflect on the history that we hear from Friedman’s friend Seidman about how we “signed up” for those high-minded proclamations in the Declaration of Independence and the U.S. Constitution. The truth is that most of us didn’t “sign up” for anything; we were just born here; and – by the way – the Founders were hypocrites who said and wrote things that they didn’t believe at all.

When slaveholding Thomas Jefferson wrote “We hold these truths to be self-evident, that all men are created equal, that they are endowed by their Creator with certain unalienable Rights, that among these are Life, Liberty and the pursuit of Happiness,” he didn’t believe a word of it. He considered his black slaves inferior beings and thought they deserved none of those “unalienable rights.” He devoted much of his adult life to defending and expanding the institution of slavery, which – by increasing demand for his human chattel – also increased his personal wealth.

When Gouverneur Morris penned the Preamble to the U.S. Constitution, citing “We the People” as the nation’s true sovereigns, he really meant white men of money and means, not poorer white men, nor women, and surely not slaves. His reference to “the People” was another propagandistic affectation.

There may be some irony in the fact that history imparts genuine value to the words of Jefferson and Morris even if they were simply empty propaganda when written. Jefferson’s assertion that “all men are created equal” possessing “unalienable rights” has inspired people around the world – and a literal interpretation of Morris’s florid rhetoric did, in a way, make “We the People” the technical sovereigns of America, as much as today’s ruling elites don’t really believe that either.

Much of what we see from the likes of Friedman is designed to reassert elite control by putting us back in an information-starved dependent state, reliant on the Establishment to parcel out a few morsels of information as it sees fit, the “truth” that the powers-that-be deign to give us. All the better for us to “trust” them.

But the messy behind-the-scenes reality that WikiLeaks and other publishers of “cyberhacked” and leaked material have made available to us – as well as the hypocritical and ambiguous history of the United States – is part of America’s “truth” and thus a reality that should belong to all the people.

Instead, Friedman and other Important People prefer a future in which unpleasant and unpopular truths can be marginalized or erased, all the better to guarantee our “trust” in our leaders.

The Times and the Post, in particular, have consistently conflated any deviation from their preferred groupthinks with “fake news” and “propaganda.” That is why it is particularly troubling when they and other self-proclaimed arbiters of truth, including the pro-NATO propaganda site Bellingcat, sit on Google’s First Draft Coalition and salivate over the prospects of unleashing high-tech algorithms to hunt down and eliminate information that runs counter to what they call the “truth.”

The real truth about truth is that it is almost always complex and often hidden by powerful interests. It requires skepticism, hard work and even courage to reveal it.

Sure, there are occasions when creeps and crazy people purposely make up stuff or ignore reality in pursuit of some nutty conspiracy theory – and that deserves hearty condemnation – but there are many other times when the conventional wisdom is wrong and the people demanding inconvenient facts and asking probing questions turn out to be right.

So, if Friedman and his friends really want to restore trust and truth, they might begin by acknowledging their own flaws and by admitting the times when their groupthinks turned out to be wrong. They also might start respecting the value that dissent has in the difficult pursuit of truth.