Exclusive: The “fake news” theme has captivated The Washington Post and the mainstream U.S. media so much that it is stooping to McCarthyistic smears against news outlets that don’t toe the State Department’s propaganda line, says Robert Parry.

The mainstream U.S. media’s hysteria over “fake news” has reached its logical (or illogical) zenith, a McCarthyistic black-listing of honest journalism that simply shows professional skepticism toward Officialdom, including what’s said by U.S. government officials and what’s written in The Washington Post and New York Times.

Apparently, to show skepticism now opens you to accusations of disseminating “Russian propaganda” or being a “useful idiot” or some similar ugly smear reminiscent of the old Cold War. Now that we have entered a New Cold War, I suppose it makes sense that we should expect a New McCarthyism.

After returning from a Thanksgiving trip to Philadelphia on Saturday, I received word that Consortiumnews.com, the 21-year-old investigative news site that has challenged misguided “group thinks” whether from Republicans, Democrats or anyone else over those two-plus decades, was included among some 200 Internet sites spreading what some anonymous Web site, PropOrNot, deems “Russian propaganda.”

I would normally ignore such nonsense but it was elevated by The Washington Post, which treated these unnamed “independent researchers” as sophisticated experts who “tracked” the Russian propaganda operation and assembled the black list.

And I’m not joking when I say that these neo-McCarthyites go unnamed. The Post’s article by Craig Timberg on Thursday described PropOrNot simply as “a nonpartisan collection of researchers with foreign policy, military and technology backgrounds [who] planned to release its own findings Friday showing the startling reach and effectiveness of Russian propaganda campaigns.”

The Post granted the group and its leadership anonymity to smear journalists who don’t march in lockstep with official pronouncements from the State Department or some other impeccable fount of never-to-be-questioned truth. The Post even published a “blind” (or unattributed) quote from the head of this shadowy Web site as follows:

“‘The way that this propaganda apparatus supported [Donald] Trump was equivalent to some massive amount of a media buy,’ said the executive director of PropOrNot, who spoke on the condition of anonymity to avoid being targeted by Russia’s legions of skilled hackers.”

As a professional journalist for more than four decades, it is hard for me to comprehend how a supposedly reputable newspaper like The Washington Post would allow some anonymous character to attack the patriotism of American journalists while hiding the person’s name behind the ridiculous excuse that he or she might be targeted by hackers.

In 1985, when I was an investigative reporter for The Associated Press and first exposed Oliver North’s secret White House operation in support of the Nicaraguan Contra rebels, I got some flak for using North’s name because he claimed that he might be targeted by assassins — even though he was not officially a covert operative. His name and title were listed in the White House directory, for instance.

So, as silly and unfounded as North’s worries were – and The Washington Post then followed me in publishing North’s name – at least North’s concerns dealt with his personal safety. But now we have the Post treating an alleged study by supposed “independent researchers” as needing the protection of anonymity to allow the Web site’s executive director to expound on the group’s slanderous assessments without giving his or her name.

In such a case, how is the public supposed to evaluate the smears and whether these researchers are indeed “independent” or are funded by some actual propaganda network, like those financed by the National Endowment for Democracy or USAID or financial speculator George Soros or some military-industrial-complex think tank?

Indeed, isn’t what this Post-promoted Web site doing the essence of McCarthyistic “fake news” – making vague accusations and imposing guilt by association, suggesting that all the Web sites on its list are either treasonous or dupes?

Though the Post doesn’t seem to care about fairness regarding the 200 or so Web sites subjected to this McCarthyism, the smear operation doesn’t even present evidence that anyone actually is part of this grand Russian propaganda conspiracy. The PropOrNot site admits that the criteria for its “analysis” are “behaviorial,” not evidentiary.

In other words, the assessment is based on whether this anonymous group doesn’t like that some journalist is questioning the State Department’s propaganda line or has come up with information that isn’t convenient to the NATO narrative on a topic that also involves Russia, Ukraine, Syria or some other international hot spot.

As the Post recognized in its article, the phrase “useful idiot” or “useful fool” comes from the old Cold War – when journalists and citizens who didn’t march in lock-step with Washington’s propaganda were so stigmatized. That such a grotesque and pejorative phrase was used in this supposedly “independent” study should have been a warning to any professional newspaper to toss the report in the trash can. Instead, The Washington Post embraced it as gospel. 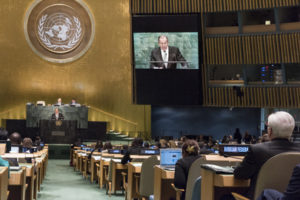 What is further remarkable about this bizarre “study” is that it mixes together a wide variety of diverse political, ideological and journalistic groups, including some of the best independent journalism sites on the Internet, such as Counterpunch, Truthdig, Naked Capitalism, Zero Hedge, Truth-out, WikiLeaks and – I would humbly suggest — Consortiumnews.

Also, neither truth nor fact-based journalism appears to be involved in  this “analysis.” No one from this Web site or from The Washington Post contacted me about any alleged inaccuracies or “propaganda” in Consortiumnews’ stories.

Obviously, there have been times when we have challenged “facts” as claimed by the U.S. government and the Post, including their 2002-03 assertions about Iraq’s fictional WMD. (Back then, we were denounced by George W. Bush’s fans as “Saddam apologists.”)

We also have cited cases of disagreements inside the U.S. intelligence community about other “group thinks” that were being pushed by the State Department and the mainstream U.S. news media, such as the CIA’s internal doubts about who was responsible for the Aug. 21, 2013 sarin gas attack outside Damascus, Syria.

Consortiumnews also has cited disclosures buried deep inside articles by the Post and New York Times regarding the important role of neo-Nazis and other ultra-nationalist militias in the putsch that ousted Ukraine’s elected President Viktor Yanukovych on Feb. 22, 2014, and in the subsequent civil war.

I guess readers are supposed to ignore these occasional bursts of honesty from some reporter in the field who feels obliged to mention the Swastikas and other Nazi symbols festooning the rooms and uniforms of these U.S.-backed “freedom fighters” — although the reporter and editors know well enough to stick these references near the end of stories where few people are likely to read. Our “propaganda guilt” is that we read to the end of these articles and highlight these important admissions.

Then, there are times when Consortiumnews has referred to these occasional admissions about neo-Nazis and compared them to positive mainstream references to these same neo-Nazis. For instance, the Times itself included at least one brief reference to this neo-Nazi reality, though buried it deep inside an article. On Aug. 10, 2014, a Times’ article mentioned the neo-Nazi Azov battalion in the last three paragraphs of a lengthy story on another topic.

“The fighting for Donetsk has taken on a lethal pattern: The regular army bombards separatist positions from afar, followed by chaotic, violent assaults by some of the half-dozen or so paramilitary groups surrounding Donetsk who are willing to plunge into urban combat,” the Times reported.

“Officials in Kiev say the militias and the army coordinate their actions, but the militias, which count about 7,000 fighters, are angry and, at times, uncontrollable. One known as Azov, which took over the village of Marinka, flies a neo-Nazi symbol resembling a Swastika as its flag.” [See Consortiumnews.com’s “NYT Discovers Ukraine’s Neo-Nazis at War.”]

Yet, later the Times published a story about the Ukrainian government’s defense of the port of Mariupol against ethnic Russian rebels and the Azov battalion was treated as the last bastion of civilization battling against the barbarians at the gate. Remarkably, the article left out all references to the Azov battalion’s Nazi Swastikas. [See Consortiumnews.com’s “NYT Whites Out Ukraine’s Brown Shirts.”]

It is that exposure of the mainstream U.S. media’s distortions of the reality in Ukraine that has apparently earned Consortiumnews a spot on this strange list of willful disseminators of “Russian propaganda” or “useful idiots.”

It also might be noted that Consortiumnews has repeatedly pointed out how The Washington Post falsely reported as flat fact that Iraq was hiding WMD yet the editors responsible for this acceptance of State Department propaganda, which got some 4,500 American soldiers killed along with hundreds of thousands of Iraqis, have never faced accountability. [See Consortiumnews.com’s “A Media Unmoored from Facts.”]

Ironically, too, it should be noted that on Saturday, The New York Times, which also has been flogging the “fake news” theme, ran a relatively responsible article revealing how a leading “fake news” Web site was not connected to Russia at all but rather was an entrepreneurial effort by an unemployed Georgian student who was using a Web site in Tbilisi to make some money by promoting pro-Trump stories, whether true or not.

The owner of the Web site, 22-year-old Beqa Latsabidse, said he had initially tried to push stories favorable to Hillary Clinton but that proved unprofitable so he switched to publishing anti-Clinton and pro-Trump articles whether true or not.

The front-page Times article revealed what has been happening – entrepreneurs who want to make money have been peddling pro-Trump “news” because that’s what gets the clicks and thus the advertising dollars. That behavior does not implicate Consortiumnews or any other independent Web site that happens to challenge State Department propaganda. (Consortiumnews relies on donations from readers and some book sales to meet its modest $200,000-a-year budget.)

To merge these two groups – profit-driven sites that don’t care what the truth is and honest journalism sites that show professional skepticism toward government propaganda whatever its source – is a kind of classic example of “fake news” although in this case the mysterious Web site PropOrNot and The Washington Post are peddling the disinformation.

← The West’s Shift Toward Repression
Trying to Reason with Trump →