The West’s “liberal democracies” are undergoing a shift toward repression with new initiatives to spy on citizens and punish whistleblowers who expose government abuses, observes ex-British intelligence officer Annie Machon.

Forgive my “infamously fluent French” but the phrase “pour encourager les autres” – a reference to executing one powerful person to send a message to others – seems to have lost its famously ironic quality. It seems that the U.S. government is globally paying big bucks to people to encourage them to expose the crimes of their employers, but only if they’re working for banks and other financial institutions – as opposed to say working for the government and its intelligence agencies.

I have been aware for a few years that the U.S. government instituted a law in 2010 called the Dodd-Frank Act that is designed to encourage people employed in the international finance community to report malfeasance to the Securities and Exchange Commission (SEC), in return for a substantial percentage of any monies recouped.

Seal of the National Security Agency

This law seems to have produced a booming business for such high-minded “whistleblowers” – if that could be the accurate term for such actions. They are celebrated and can receive multi-million dollar paydays, the most recent (unnamed) source receiving $20 million.

Nor is this U.S. initiative just potentially benefiting U.S. citizens – it you look at the small print at the bottom of this page, disclosures are being sent in from all over the world. Which is all to the public good no doubt, especially in the wake of the 2008 global financial crash and the ensuing fall-out that hit us all. We need more clarity about arcane casino banking practices that have bankrupted whole countries, and we need justice.

But U.S. government does send out a number of contradictory messages to those in other areas of work who might also have concerns about the legality of actions by their organizations which may have equal or even graver impacts on the lives of their fellow human beings.

If you work in finance anywhere in the world and you see irregularities, it is apparently your legal duty to report them through appropriate channels and then count the dollars as they flow in as reward. Such is the power of globalization, or at least the U.S. self-appointed role as the global hegemon. 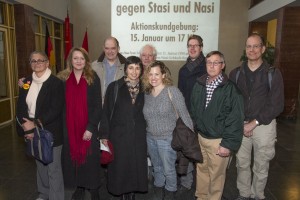 However, if you happen to work inside the U.S. government, its intelligence agencies or its military, under the terms of the U.S. Constitution, it would appear that you also have a solemn duty under oath to report illegalities that violate the Constitution by going through the officially designated channels and hoping that reform is the result.

But, from all recent examples, it would appear that you get damn few thanks for such patriotic actions. Take the case of Thomas Drake, a former senior National Security Agency executive who in 2007 went public about waste and wanton expenditure within the agency, as I wrote way back in 2011. Before doing so, Drake had gone through all the prescribed routes for such disclosures, up to and including a congressional committee.

Despite all this, Drake was abruptly snatched by the FBI in a violent dawn raid and threatened with 35 years in prison. He (under the terrifying American plea bargain system) accepted a misdemeanor conviction to escape the horrors of federal charges, the resulting loss of all his civic rights and a potential 35 years in prison.  He still, of course, lost his job, his impeccable professional reputation, and his whole way of life.

He was part of a NSA group that also included William Binney, the NSA’s former Technical Director, and his fellow whistleblowers Kirk Wiebe, Ed Loumis and Diane Roark. These brave people had developed an electronic mass-surveillance program called Thin Thread that could zero in on those people who were genuinely of security interest and worth targeting, a program which would have been relatively cheap, costing only $1.4 million and would have been consistent with the terms of the Constitution. According to Binney, it could potentially have stopped 9/11 and all the attendant horrors..

Instead, it appears that bureaucratic backs were scratched and political favors called in by the incoming neoconservative government of George W Bush in 2000, and another program called Trail Blazer was developed, to the tune of $1.2 billion – and which spied on everyone across America (as well as the rest of the world) and thereby broke, at the very least, the terms of the Constitution.

Yet Bill Binney was still subjected to an FBI SWAT team raid – he was dragged out of the shower early one morning at gunpoint. All this is well documented in an excellent film “A Good American” and I recommend watching it.

If the treatment of financial whistleblowers were in place for national security whistleblowers, Binney would have received a payout of millions of dollars for protecting the rights of his fellow citizens and for saving the American taxpayers more than $1 billion. But, of course, Binney’s whistleblowing was not in the long-term business interests of the now-global surveillance of the National Security State.

President Dwight Eisenhower, in his valedictory speech in 1961, warned of the subversive interests of the “military-industrial” complex.  That seems so quaint now as we face a steroid-pumped, globalized military surveillance industry that will do anything to protect its interests. So, rather than holding the powerful and well-connected accountable for fleecing and spying on the American people, it is the principled whistleblowers who are crushed — “pour encourager les autres.“

There are the even-more-egregious cases of Chelsea (formerly Bradley) Manning and Edward Snowden. The former, as you may remember, is the former U.S. Army private currently serving 35 years in a military prison for exposing U.S. war crimes. She is the most obvious victim of outgoing-President Obama’s war on whistleblowers and surely deserving of his supposed outgoing clemency.

The latter, currently stranded in Russia en route from Hong Kong to political asylum in Ecuador is, in my view and as I have said before, the most significant whistleblower in modern history. But he gets few thanks – indeed incoming Trump administration appointees have in the past called for imposing the death penalty on Snowden.

So all this is a “wonderfully outstanding encouragement” to those in public service in the U.S. – not. Work for a bank and anonymously snitch –ka-ching! Work for the government and blow the whistle – 30-plus years in prison or worse. Hmmm.

If President-elect Donald Trump is serious about “draining the swamp” then perhaps he could put some serious and meaningful public service whistleblower protection measures in place, rather than prosecuting such patriots.

After all, such measures would be a win-win situation, as I have said many times before – a proper and truly accountable channel for potential whistleblowers to go to, in the expectation that their concerns will be properly heard and investigated.

That way the intelligence agencies can become truly accountable, sharpen their game, avoid financial scandals and better protect the public; and the whistleblowers do not need to ruin their lives, lose their jobs, face imprisonment, or worse.

After all, where are the most heinous crimes witnessed? Sure, bank crimes impact the economy and ruin the lives of working people; but out-of-control intelligence agencies that kidnap, torture and assassinate people around the world, operating in secret, actually end lives.

All that said, other Western liberal democracies are surely less draconian than the U.S., no? Well, unfortunately not. Take the U.K., a country still in thrall to the glamorous myth of James Bond, and where there have been multiple intelligence whistleblowers from the agencies over the last few decades – yet all of them have automatically faced prison.

In fact, the U.K. suppression of intelligence, diplomatic and military whistleblowers seems to have acted as an exemplar to other countries in how you stifle ethical dissent from within.

Sure, the prison sentences for such whistleblowing are not as draconian under the U.K.’s Official Secrets Act (1989) as the anachronistic U.S. Espionage Act (1917). But the clear bright line against ANY disclosure is just as stifling.

In the U.K., a country where the intelligence agencies have for the last 17 years been illegally prostituting themselves to advance the interests of a foreign country (the U.S.), this is simply unacceptable. Especially as the U.K. has just made into law the Investigatory Powers Act (2016), which legalizes all this previously illegal activity and indeed expands the hacking powers of the state. (This law was enacted over expert advice.)

More worryingly, the ultra-liberal Norway, which blazed a calm and humanist trail in its response to the murderous white-supremacist terrorist attacks of Anders Breivik five years ago, has now proposed a draconian surveillance law.

And Germany – a country horrified by revelations made by Snowden in 2013 which stirred memories of the surveillance powers of the Gestapo and the Stasi last century – has also just expanded the surveillance authority of its intelligence agencies.

In the face of all this, it appears there has never been a greater need of intelligence whistleblowers across the Western world. Yet it appears that, once again, there is one standard for financial whistleblowing, complete with generous financial rewards.

But for whistleblowers in the intelligence world, for those Poor Bloody Whistleblowers, it’s prosecution and persecution as usual, despite the fact that they may indeed be serving the most profound of public interests – freedom, privacy and the ability to thereby have a functioning democracy.

As always – plus ça change, plus c’est la même chose. So back to my fluent French, referenced at the start: we are, it seems, all still mired in the merde.

11 comments for “The West’s Shift Toward Repression”