By blocking travelers from seven mostly Muslim nations – but not ones that have sent terrorists to the U.S. – President Trump has pushed an incoherent policy that may increase the risks of terrorism, writes ex-CIA analyst Paul R. Pillar.

Donald Trump’s efforts, during his first week in office, to give substance to his campaign rhetoric have involved executive orders that have generated reactions ranging from bemusement over their vagueness to worried waiting for other shoes to drop. But the previous orders do not do as much quick damage, both to individual U.S. persons and their families and to broader U.S. foreign relations and national security, as the grossly mistitled order, “Protecting the Nation from Foreign Terrorist Entry into the United States.” 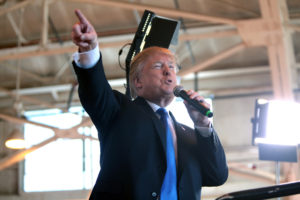 The heartlessness of what the order does regarding asylum and resettlement for refugees fleeing strife and persecution is bad enough. In addition to humanitarian considerations, the move undercuts everything Trump has said about burden-sharing — such as when he complains about NATO and the contributions of other members of the alliance.

Trump has repeatedly portrayed his objective regarding the processing of foreign applications for admission to the United States, and what this executive order supposedly begins to implement, as “extreme vetting” that is somehow more rigorous than what has been in place. He ignores, however, how the existing vetting is among the most rigorous by any country, and by many standards rather extreme already.

The sudden and sweeping nature of the barrier to travel that Trump has thrown up is already having deleterious effects on many U.S. citizens. First- and second-generation Americans especially are suddenly being kept separate from parents and spouses. And that is just a portion of the hardship being experienced by innocent individuals with legal status in the United States, such as businessmen returning from overseas or students and scholars returning from conferences.

The order, despite the title, is divorced from where actual terrorist threats to the United States are most likely to come from. The order does nothing to protect against the kind of attacks the United States has most experienced in the decade and a half since 9/11, perpetrated by radical individuals, including U.S. citizens, in places such as Fort Hood or Orlando. It ignores how terrorism in the West generally has not been the work of individuals who are nationals of countries whose regimes we don’t happen to like.

The order is anti-Islam and anti-Muslim, and will be primarily read as such by audiences overseas, given the previously established record of Islamophobia of Trump and some others with high positions in his administration. The President reinforced that message Friday in an interview with the Christian Broadcasting Network, in which he said that in any future refugee resettlement his administration would give preference to Christians over members of other religious groups.

In using a falsehood (or lie, or “alternative fact,” or however one chooses to label it), Trump asserted about U.S. practices to date, “If you were a Muslim you could come in, but if you were a Christian, it was almost impossible.”

In fact, the United States admitted nearly as many Christian refugees (37,521) as Muslims (38,901) in fiscal year 2016, even though Muslims constitute a significantly higher proportion of people suffering from, and fleeing from, war and violence in the Middle East.

This kind of religious litmus test is a marked departure from the best historical traditions of American taking in tired, poor, huddled masses. It is a throwback to some of the most ignoble phases of American history. “Yellow peril” of bygone years has now been replaced by Trump’s “green peril.” Such religious discrimination in admitting foreigners may also be illegal, as a violation of law that was enacted to prevent a return to the more prejudicial practices of the past.

As for terrorism, the anti-Muslim nature of this order is likely to increase anti-U.S. terrorism rather than decrease it. The order is music to the ears of ISIS, Al Qaeda, and other violent groups that portray in their propaganda and recruitment pitches a world engulfed in a war between Islam and a Judeo-Christian West that is led by the United States and is out to persecute Muslims. Persuading other governments, especially in the Muslim world, to cooperate with the United States in the name of counterterrorism will be made more difficult. And Americans will be more, not less, likely to fall victim to terrorism perpetrated by Islamist extremists.

The designation of the nationals of seven states (Iran, Iraq, Libya, Somalia, Sudan, Syria, and Yemen) for the most sweeping prohibition on entry to the United States (i.e, for all travelers, not just refugees) for at least 90 days reinforces the anti-Islam flavor of the executive order, given that these are all Muslim-majority countries. This grouping of states was first named in legislation that the Republican-controlled Congress passed last year as “countries of concern.” But that legislation had to do with which countries were or were not to be eligible for the visa-waiver program. The new executive order is instead a blanket ban on all travel to the United States, visa or no visa.

Conceivably this list of seven could dilute the anti-Islam flavor of the order somewhat, given that other Muslim-majority countries are not so listed. But looking closely at who was listed and who wasn’t only underscores how far divorced this matter is from counterterrorism. No one from any of the seven countries on the list has killed anyone in a terrorist attack in the United States. By contrast, the hijackers who perpetrated 9/11 came mostly from Saudi Arabia and the rest from the United Arab Emirates, Egypt, and Lebanon; none of these countries are on the list.

To the extent any distinction is being made between Muslims the administration most wants to keep out and others to whom it will be a little more tolerant, the distinction seems to be made for unrelated reasons that some regimes get favored and others don’t. The reasons not only don’t have to do with terrorism but also don’t relate to democracy or human rights either.

And maybe there’s an additional explanation, very much in the realm of the ignoble. It has not escaped the notice of media that some of the principal countries — including Saudi Arabia, the UAE, and Egypt — that legitimately could be objects of worry as exporters of terrorists but aren’t on the no-travel list are ones in which Trump in his private capacity has done business or sought to make deals. Thus this matter will be one of the first of what are likely to be many presidential decisions about which, as long as Trump flouts ethical principles and refuses to divest himself of his business interests, understandable questions will be raised about his motives.

On the same day he signed the executive order with the travel bans, Trump implicitly raised the same sort of question about another of his positions that goes against U.S. interests: his support for Brexit and his overall antipathy toward the European Union. In an appearance with visiting British Prime Minister Theresa May, the President remarked that in seeking necessary approvals for his business deals in Europe, getting approvals from individual countries was “fast, easy and efficient” but that he had a “very bad experience” with the E.U., where it was “very, very tough” to get approvals. Then he put in a plug for his golf course at Turnberry.