In many of the major social/political battles of the Twentieth Century, lawyer Leonard Weinglass defended activists facing government criminal charges, as a new book about his life recalls, writes Marjorie Cohn. 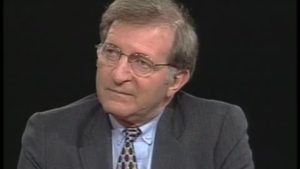 Weinglass is now immortalized in Len: A Lawyer in History, a valuable graphic historical work by cartoonist/writer Seth Tobocman. The book features some of Weinglass’ most significant cases, analyzing them in the historical context of the political movements in which they took place.

Weinglass, a longtime member of the National Lawyers Guild, was a brilliant attorney who empowered his clients. Unlike many lawyers, he understood that the case belongs to the client who must live with the consequences of the result. His clients had the final say about what strategy and tactics to employ. Weinglass took cases other lawyers would not, sometimes for no fee.

“[Weinglass] wasn’t drawn to making money. He was drawn to defending justice,” said Daniel Ellsberg, whose leak of the Pentagon Papers helped end the Vietnam War. “He felt in many cases he was representing one person standing against the state. He was on the side of the underdog. He was also very shrewd in his judgment of juries,” Ellsberg added.

A former military analyst and Marine who served in Vietnam, Ellsberg worked at the Rand Corp. and the Pentagon. He risked decades in prison to release 7,000 top-secret documents to The New York Times and other newspapers in 1971. The Pentagon Papers demonstrated how five presidents consistently lied to the American people about the Vietnam War that was killing thousands of Americans and millions of Indochinese.

Ellsberg’s courageous acts led directly to the Watergate scandal and President Richard Nixon’s resignation. Henry Kissinger, Nixon’s national security adviser, called Ellsberg “the most dangerous man in America” who “had to be stopped at all costs.” But Ellsberg wasn’t stopped. Facing 115 years in prison on espionage and conspiracy charges, he fought back.

Weinglass represented Ellsberg and Tony Russo, who helped Ellsberg copy the Pentagon Papers. The case was ultimately dismissed due to egregious misconduct by the Nixon administration. Ellsberg’s story was portrayed in the Oscar-nominated film, “The Most Dangerous Man in America.” Edward Snowden told Ellsberg that the film strengthened his resolve to release the National Security Agency documents.

Another of Weinglass’ cases highlighted in Tobocman’s book is the Chicago Eight trial. Tens of thousands of people protested the Vietnam War outside the 1968 Democratic Convention in Chicago. In the face of widespread police brutality captured on television, Nixon charged eight people with the federal offense of crossing state lines to incite a riot. 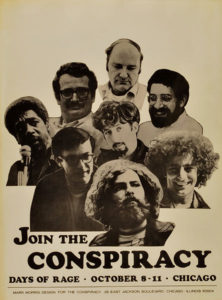 A poster about the Chicago Eight case.

Weinglass and Kuntsler represented seven of the defendants. Black Panther Party co-founder Bobby Seale, denied the right to represent himself when his attorney, Charles Garry, was unable to appear, was bound and gagged by the ruthless judge Julius Hoffman.

The seven were Tom Hayden, Abbie Hoffman, Jerry Rubin, David Dellinger, Rennie Davis, Lee Weiner and John Froines. “Judge Hoffman was not impartial, but an activist seeking combat. He took things personally and turned the court into an armed camp,” Tobocman wrote. The judge refused to allow the defense to call police experts to testify about police overreaction or ask potential jurors whether pretrial publicity would affect them.

Froines and Weiner were acquitted, but the jury convicted Hayden, Hoffman, Rubin, Davis and Dellinger. Weinglass succeeded in getting the appellate court to reverse their convictions. Seale, who was hit with a four-year sentence for contempt of court, was eventually released early, too.

Weinglass’s final case was the appeal of the convictions of the Cuban Five. For more than 40 years, anti-Cuba terrorist organizations based in Miami had engaged in countless terrorist activities against Cuba and anyone who advocated the normalization of relations between the U.S. and Cuba. Terrorist groups, including Alpha 66, Omega 7, Comandos F4, Cuban American National Foundation, Independent and Democratic Cuba, and Brothers to the Rescue, operated with impunity in the United States.

Five Cuban men — Gerardo Hernández, Antonio Guerrero, Ramón Labanino, René González and Fernando González—traveled from Cuba to the United States in the 1990s to gather information about terrorist plots against Cuba. The Cuban Five peacefully infiltrated these organizations. They then turned over the results of their investigation to the FBI.

But instead of working to combat terrorist plots in the United States against Cuba, the U.S. government arrested the Five and charged them with conspiracy to commit espionage and conspiracy to commit murder. They were convicted in a Miami court in 2000. Hernandez, Guerrero and Labanino received life sentences, with Fernando Gonzalez sentenced to 19 years in prison and Rene Gonzalez 15 years.

“Conspiracy has always been the charge used by the prosecution in political cases,” Weinglass said. “In the case of the Five, the Miami jury was asked to find that there was an agreement to commit espionage. The government never had to prove that espionage actually happened. It could not have proven that espionage occurred. None of the Five sought or possessed any top secret information or U.S. national defense secrets,” Weinglass added.

A three-judge panel of the 11th U.S. Circuit Court of Appeals unanimously overturned their convictions in 2005, ruling that the Five could not get a fair trial in Miami due to pervasive anti-Cuba sentiment there. Nevertheless, the 11th Circuit, sitting en banc, upheld the convictions.

But, Weinglass stated, “It is inexplicable that the longest trial in the United States at the time it occurred, hearing scores of witnesses, including three retired generals and a retired admiral, as well as the president’s adviser on Cuban affairs (all called by the defense) and a leading military expert from Cuba, all the while considering the dramatic and explosive 40-year history of U.S.-Cuba relations, did not qualify for any media attention outside of Miami.”

A Battle with Cancer

Weinglass was in Cuba, working on the case, when he was diagnosed with cancer. He continued to work for the freedom of the Five until his death in March 2011. Two of the Five were released after long prison sentences. The remaining three were freed as part of the historic agreement between Cuban President Raul Castro and President Barack Obama in December 2014.

On a visit to Cuba in 2015, Guerrero told me he was overwhelmed with sadness at Weinglass’s death. “He was my brother,” Guerrero said.

Weinglass’s close friend Susan Schnall said, “His personal, political and professional life combined to be an inspiration to all who knew him.” She described Weinglass as “meticulous, tireless, dedicated and brilliant when defending his clients. Even as he got older,” she added, “he got reinvigorated and refreshed after spending 16-hour days pouring through boxes and boxes of trial files on behalf of his clients.”

In the spring of 2010, Weinglass wrote to her, “Having accomplished something is really all I need to work past exhaustion.”

Tobocman’s unique book is required reading for all who seek to learn about the remarkable legal career of Leonard Weinglass. It also provides a valuable history lesson of people’s struggles that may inspire a new generation of political activists as they resist Donald Trump’s mean-spirited agenda.

Marjorie Cohn is professor emerita at Thomas Jefferson School of Law, former criminal defense attorney, past president of the National Lawyers Guild and deputy secretary general of the International Association of Democratic Lawyers. Her most recent book is Drones and Targeted Killing: Legal, Moral, and Geopolitical Issues. [This article originally appeared at Truthdig at
Please give attribution to Truthdig: http://www.truthdig.com/report/item/remembering_peoples_lawyer_len_weinglass_20170129.]