When President Obama expelled Russian diplomats over the hysterical and unproven accusation of Russia “hacking the election,” Russian President Vladimir Putin refused to be drawn into a petty squabble, saying he would delay any response until Donald Trump assumed office. Instead Putin invited American diplomats and their families in Moscow to join the official holiday celebrations in the Kremlin.

Then came the shock that shook Official Washington: President-elect Trump, in the form of a tweet heard round the world, wrote: “Great move on delay (by V. Putin) – I always knew he was very smart!”

And just to be sure that everyone saw it, Trump “pinned” the tweet which means it is the first thing seen by viewers of his account. This was a first use of “pinning” for Trump. And to be doubly sure, he posted it on Instagram as well. This was no spontaneous midnight outburst but a very deliberate action taken on Friday noon, Dec. 30, the day after Obama had issued his retaliation order.

The implications of this move are, arguably, breathtaking. Trump treated Putin as his ally, not as a hated adversary. And he treated Obama and the bipartisan foreign policy elite of Washington as his adversaries, not his allies – a move that makes perfect sense if Trump’s desire is to rein in the War Party’s New Cold War and to strive for a New Détente with Russia.

If the main enemy is those who are stoking the New Cold War and risking worse, then Trump has placed himself squarely against these war hawks. And stop to consider for a moment who these folks are. Besides President Obama and Hillary Clinton, they represent a full-blown armchair army: neocons, liberal interventionists, the mainstream media, various Soros-funded “non-governmental organizations,” virtually all the important think tanks, the leadership of both major parties, and the CIA and the other U.S. intelligence agencies. This array of Official Washington’s power elite has been working 24/7 at demonizing Putin and stoking tensions with nuclear-armed Russia. Trump took on all of them on with his tweet!

Putin as Ally Against the War Party

As Trump looks for new allies in pursuit of a New Détente and a relaxation of U.S.-Russian tensions, Putin is foremost among them. Thus, in the struggle for peace, Trump has drawn new lines, and they cross national borders. Not since Ronald Reagan embraced Mikhail Gorbachev or Richard Nixon went to China have we seen a development like this. In this new battle to reduce tensions between nuclear powers, Trump has shown considerable courage, taking on a wide range of attackers.

Later that afternoon, Maya Kosoff writing for Vanity Fair put out an article entitled “Twitter Melts Down over ‘Treason’ After Trump Praises Putin.” The first batch of such tweets came from “journalists and other foreign policy experts,” the next from Evan McMullin, the former CIA officer who tried to draw off Republican votes from Trump in the general election, who tweeted: “To be clear, @realDonaldTrump is siding with America’s greatest adversary even as it attacks our democracy. Never grow desensitized to this.”

Finally came the predictable rash of tweets calling Trump’s words “treasonous” or “seditious.” In response, Team Trump refused to issue a “clarification,” saying instead that Trump’s words spoke for themselves.

As stunning as Trump’s tweet was in many ways, it was in other ways entirely predictable. Despite the mainstream media’s scorn and Hillary Clinton’s mocking him as Putin’s “puppet,” Trump has held firm to his promise that he will seek peace with Russia and look for areas of cooperation such as fighting terrorism.

So, even when Trump’s Russia comments appeared to cost him politically, he stuck with them, suggesting that he believes that this détente is important. The rule of thumb is that if a politician says something that will win votes, you do not know whether it is conviction or opportunism. But if a politician says something that should lose her or him votes, then you can bet it is heartfelt.

Trump was bashed over his resistance to the New Cold War both during the Republican primaries when many GOP leaders were extremely hawkish on Russia and during the general election when the Clinton campaign sought to paint him as some sort of Manchurian Candidate. Even his vice presidential candidate Mike Pence staked out a more hawkish position than Trump.

Trump stood by his more dovish attitude though it presented few electoral advantages and many negatives. By that test, he appears to be sincere. So, his latest opening to Putin was entirely predictable.

A Choice of Peace or War

What is troubling, however, is that some Americans who favor peace hate Trump so much that they recoil from speaking out in his defense over his “treasonous” tweet though they may privately agree with it. Some progressives are uncomfortable with the mainstream’s descent into crude McCarthyism but don’t want to say anything favorable about Trump. 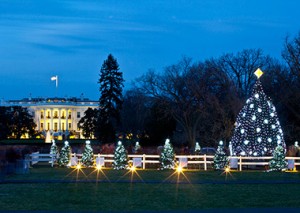 The 2012 National Christmas Tree with the White House in the background. (U.S. Government photo)

After all, a vote for President is either thumbs up or thumbs down – nothing in between – though voters may like or dislike some policy prescriptions of one candidate and other positions of another candidate. And progressives could list many reasons to not vote for Trump.

But a presidential administration is multi-issued – not all or none. One can disagree with a president on some issues and agree on others. For instance, many progressives are outraged over Trump’s harsh immigration policies but agree with him on scrapping the TPP trade deal.

In other words, there is no reason why those who claim to be for peace should not back Trump on his more peaceful approach toward Putin and Russia, even if they disdain his tough talk about fighting terrorism. That is the reality of politics.

What I’ve discovered is that many progressives – as well as many on the Right – who oppose endless war and disdain empire will tell you in whispers that they do support Trump’s attempt at Détente 2.0, though they doubt he will succeed. In the meantime, they are keeping their heads down and staying quiet.

But clearly Trump’s success depends on how much support he gets – as weighed against how much grief he gets. By lacking the courage to defend Trump’s “treasonous tweet,” those who want to rein in the warmongers may be missing a rare opportunity. If those who agree with Trump on this issue stay silent, it may be a lost opportunity as well.

John V. Walsh, an anti-war activist, can be reached at John.Endwar@gmail.com