Somewhat surprisingly, a genuine grassroots, broad-based movement has emerged to oppose the incoming Trump administration, but perhaps less surprisingly – given the American left’s self-marginalizing tendencies – the nascent efforts may already be descending into sectarianism, finger-pointing and divisive identity-based politics.

One early sign of the anti-Trump coalition’s fracturing came when a group of women decided after Hillary Clinton’s defeat that they would organize a “Million Women March” to commiserate the first major-party female presidential nominee’s electoral loss to Donald Trump, a misogynist.

The day after the election, a Hawaii woman named Teresa Shook created a Facebook event and invited a few dozen of her friends to march on Washington on Jan. 21, the day after Trump’s inauguration. The idea was picked up by a Hillary Clinton Facebook fan page called Pantsuit Nation, with more than three million members, and suddenly there were multiple event pages with thousands of women signing up.

The original name of the march, however, was hastily dropped after the organizers were accused of “cultural appropriation.” Apparently the organizers hadn’t considered that the name “Million Woman March” was already used in 1997 by a demonstration organized for black women.

As one critic wrote on Facebook, “I take issue with white feminists taking the name of something that Black people started to address our struggles. … I will not even consider supporting this until the organizers are intersectional, original and come up with a different name.”

Other concerns were raised about whether an event organized primarily by white women would properly address issues of class and race, but some of those fears now seem to have been allayed. The “national co-chairs” of the event include women of color Tamika Mallory, Carmen Perez, and Linda Sarsour, with notable credentials in civil rights and social justice activism on their resumes.

Mallory, for example, is “nationally recognized as a fiery and outspoken champion for social justice who has worked closely with the Obama Administration as an advocate for civil rights issues,” according to the event’s website. Perez “has dedicated 20 years to advocating for many of today’s important civil rights issues, including mass incarceration, gender equality, violence prevention, racial healing and community policing.”

The event’s partner organizations include both established mainstream organizations such as the National Organization for Women and Oxfam, and upstarts further to the left such as Code Pink and Center for Popular Democracy. While Democratic Party-affiliated groups, such as the Indian American Democratic Club, have endorsed, so too have alternative parties such as the Baltimore County Greens.

But although many Democrats have gotten behind the women’s march, they seem to be keeping other counter-inaugural efforts at arm’s length. While Greens and anti-capitalists are uniting to take a stand on Jan. 20 in opposition to Trump’s swearing-in ceremonies, Democratic Party-affiliated groups are nowhere to be seen in the lists of endorsements for Inauguration Day protests.

For example, an “Occupy Inauguration” effort has been endorsed by the U.S. Green Party and Socialist Alternative, but no Democrats. The DC Welcoming Committee, “a collective of experienced local activists and out-of-work gravediggers,” is spearheading #DisruptJ20, which aims to “shut down the Inauguration,” while other events are taking place in spite of Democrats across the country.

Democratic Party efforts, on the other hand, include a “Boycott Trump” campaign initiated by the Democratic Coalition Against Trump, which claims to be “directly countering Donald Trump” through grassroots action, advertising and opposition research. The organization, comprised of Democratic elected officials, party chairs, delegates, grassroots leaders and activists in all 50 states, pledges to build “a movement to stop Trump,” although has not endorsed counter-inaugural activities.

“There is an effort by Clinton supporters and the Democratic Party machine to keep the message safe,” said Sara Flounders, co-coordinator of the International Action Center, which plans to protest on Jan. 20. “But people who believed in the current electoral system just days ago are changing. They feel betrayed.”

Although at the moment, the Democratic Party and more left-wing elements seem to share common goals of “resisting the Trump regime,” many on the Democratic side still blame supporters of the Green Party’s presidential nominee Jill Stein for allegedly costing Clinton the election.

Under this logic, people who support parties in competition with Democrats still somehow owe their votes to the Democratic nominee on election day. It doesn’t seem to matter to Democratic partisans that Greens and other third party supporters have opted out of the two-party system in favor of building alternatives.

As Slate staff writer Jim Newell described the strange thinking in a column last month, “Democrats are still in the business of blaming people who are not Democrats for Hillary Clinton losing a presidential election.” Since third parties exist and don’t seem to be going anywhere, Newell notes that rather than bashing their supporters, Democrats might be better served by changing their campaign strategies “to limit defections to third parties, like they did in the previous two presidential elections.”

This, however, is not what Democrats are doing. Instead, they seem intent on vilifying people on the left for not uniting behind their candidate, Hillary Clinton, who many could not support due to her pro-war policies and the backing she enjoyed from Wall Street. 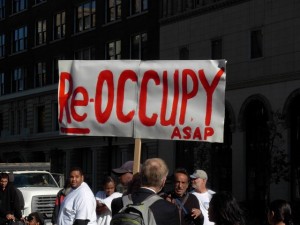 On social media, Democratic partisans are issuing such attacks as “@DrJillStein HRC was the most qualified presidential candidate, and you ruined EVERYTHING,” and “you are a major reason why 2016 was the worst year ever.” Some have even accused Stein supporters of “caus[ing] the apocalypse.”

Beyond bashing Green Party supporters, some Democrats continue to lay the blame for Clinton’s historic loss at the feet of Bernie Sanders supporters. At Mother Jones magazine, Kevin Drum writes that “Republicans would have twisted [Sanders] up like a wet rag and tossed him down the drain.”

This follows similar arguments made by Prof. Gil Troy, who wrote at Time Magazine on Nov. 14 that “Senator Bernie Sanders earned the 2016 ‘Ralph Nader Award’ for the Leftist Most Responsible for Helping Republicans Win the Presidency.”

By forcing her to express support for some progressive policies during the primaries, such as eliminating tuition at in-state colleges and universities, she was unable to mount “an effective re-centering in the fall,” Troy wrote. (This “effective re-centering” might have been further hampered when Wikileaks published excerpts from a paid speech Clinton gave in 2013, in which she acknowledged that on certain policy issues, she holds “both a public and a private position.”)

According to this view, even running a progressive primary election challenge – much less a third party campaign – is unacceptably dangerous, creating a so-called “vampire effect” that “siphons votes” that rightfully belong to someone else.

So, discouragingly to those who may have hoped for effective opposition to Trump and the Republicans, even with common ground being sought at the moment between progressives and mainstream Democrats, recriminations continue, and unless a genuine effort at promoting understanding is made, the nascent alliance between leftists and moderates will most likely fizzle out after Jan. 20 – if it lasts that long.

Nat Parry is co-author of Neck Deep: The Disastrous Presidency of George W. Bush. [This article first appeared at