The bloody truck attack on Berlin’s Christmas market is a reminder how the West’s destabilization of the Mideast and North Africa now destabilizes Europe and Chancellor Merkel, as Gilbert Doctorow describes.

It took German Chancellor Angela Merkel 10 hours to find the words to respond to the attack on a Christmas market in Berlin that left a dozen dead and scores injured. When she finally spoke and acknowledged that it looked like a terrorist act, she hastened to express the pious hope that it was not the deed of a “refugee.”

Merkel’s hesitant response to the attack on Monday shows why many Germans feel that their country is defenseless against terrorism and why Merkel’s political fortunes may be declining. The failure to promptly capture the assailant – on Wednesday, the search focused on a Tunisian suspect – has compounded public worries that Merkel has largely contained concerns about Islamic terrorism through control over information, not effective preventive steps.

The Chancellor has directed the whole state apparatus to serve the purposes of her personal rule, which means to ensure the general public is lulled into a sense of false security. Officials recoil at making any connection between terrorist acts and refugees from the Middle East whom she so warmly welcomed.

To protect her political flanks, Merkel has muzzled the police who are not allowed to say anything that contradicts her political narrative hailing the benefits of multiculturalism. With a pliant German press, she has withheld full information about rapes and other attacks which are alleged to have been committed by immigrants/refugees going back to the rampage by migrants at the Cologne main railway station last New Year’s Eve.

What we see in her rhetoric and in the political correctness she enforces is precisely what Donald Trump called out in his debates with Hillary Clinton — the refusal to deal with “Muslim extremists” or “Jihadists” in the name of avoiding ethnic or religious profiling. But whereas Clinton paid a price at the ballot box, so far Angela Merkel has escaped the voters’ punishment.

I do not pretend to be a security expert, but ever since the terrorist attacks on Belgium’s National Airport in Zaventem and on metro stations this past spring, I am aware of what was not done to protect us before and what is being done presently. With that perspective, I have a few observations to share from my day trip to Berlin this past Friday for a press conference at the Bundestag. 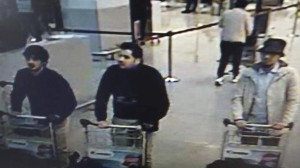 Images of the suspected bombers of Brussels’ airport on March 22, 2016.

I arrived at Berlin’s Schoenefeld airport and left from Tegel airport, which is more generally used for European flights and is conveniently close to the city center. What I saw at Tegel is exactly the same if not worse than what prevailed at Zaventem before the terrorist attack, only it is further aggravated by the peculiar configuration of Tegel’s departure/check-in facilities which form a semi-crescent served by a roadway for taxis and passenger cars to drop off passengers which would allow a car bomb to wreak havoc.

Moreover, as was the case at Zaventem, the departure area is served by many access doors, none of which is guarded. Police presence inside the terminal building is minimal.

By comparison, in the time since the attack on Zaventem, access roads to the airport have been diverted; there is no vehicular access to the building itself; and passengers on foot now pass through one entrance door only where they are subject to observation. Immediately after, they confront a detachment of four soldiers armed with heavy machine guns and facing in all four directions to ensure that no one can get past them who should not be there.

Whereas in Brussels we now have patrols of heavily armed soldiers posted at various metro stations and passing through trains, what I saw on the Berlin metro last Friday was a situation that antedated our modern age of terror. No police were in evidence on the system, only ticket controllers who passed through the trains and checked my tickets and the tickets of others to ensure we had properly stamped the tickets when we entered the system.

By the same token, we are told that the Christmas market in Berlin had no special police protection. To be sure, government buildings do better. The Bundestag was in session last Friday, and when I got there, I found that the security provisions were operating. We all passed through metal detectors and our briefcases and handbags were x-rayed.

Outside and above us a stationary helicopter was maintaining surveillance of the whole area.  And yet, the checking of visitors was done by unarmed personnel, and I wonder how effective they would be against properly trained and armed terrorists.

In summary, Merkel’s denial of the high risk facing Germany due to her lax policy on immigrants means that more terrorist attacks are likely.  So, what she has been doing to protect herself politically at the expense of everyone else’s personal safety may well be her undoing in 2017.

← A Reconciliation at Pearl Harbor
Trump’s Need to Trust Americans →