Even as Official Washington gears up for a lucrative New Cold War with Russia, America’s close “ally” Israel is finding common ground with Moscow that complicates U.S. hostility, as Zach Battat explains.

Israel can be criticized for many things, such as its lackadaisical attempts at negotiating for a two-state solution along the 1967 borders and its questionable policies towards its minorities (Arabs and others). But some in the news media have criticized the Jewish state for its recent rapprochement with Moscow, which is one position that doesn’t deserve criticism.

Given that Moscow has an interest for stability in the Middle East, this diplomatic contact shouldn’t be taken as a “bad idea” by the skeptics simply because the United States has entered a New Cold War with Russia. After all, there are reasons why Russia has an interest in Middle East stability, a goal shared by much of the world. 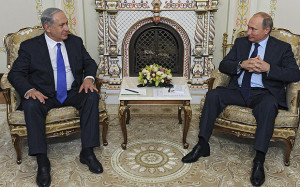 First, while the Caucasus region is not Russia proper, it is on its border and it’s a “zone of vulnerability.” Given the recent Middle East excursions or desires by the United States in Afghanistan, Iraq, Egypt and Libya, Russia has gone on high alert given that many Muslim citizens in the Caucasus countries are joining the extremist organizations that are fighting in the Middle East (and Africa).

That is the main reason why Russia came to the aid of Bashar al-Assad’s government last September in the Syrian civil war. It didn’t want to see a chaotic “Libya outcome” (best case scenario) in Syria or see the Islamic State or Jabhat Fateh al-Sham (the jihadist group formerly known as Jabhat al-Nusra, Al Qaeda’s Syrian affiliate) in Damascus.

Second, Russia has a large Muslim population (estimated at 12-15 percent or 16 million to 20 million ethnic Muslims) that it also fears might get radicalized. Since the break-up of the Soviet Union, Russia deems Islamic radicalization as one of its most serious challenges to ensure its own national integrity and stability.

A destabilized region will pose grave problems within Russia’s borders. Thus, it has created a strong partnership with Israel to coordinate these stabilizing efforts. However, like all great powers, it understands that a two-state solution between the Israelis and the Palestinians is also of grave importance for stability; with no deal, a potential civil war in Israel could break out, which could lead to unpredictable and detrimental results.

Like all other countries, Israel has its national security concerns, based on two principles: basic security and current security.

Basic security is concerned with the preservation of the very fundamentals of the Zionist enterprise — the preservation of Israel as the democratic nation-state of the Jewish people (that was the argument for disengaging from the Gaza Strip in 2005). Although, the Arab population correctly argues that under this structure, the Jewish state treats them as second-class citizens. 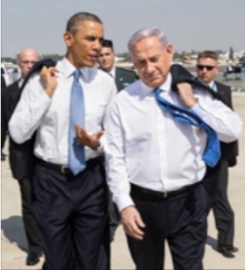 Current security is about the day-to-day maintenance of the personal safety and well-being of Israelis (i.e., preventing terrorist attacks, kidnappings, etc.). Up until recently, the Israeli Prime Minister, Benjamin Netanyahu, has been dealing with neither. He feels that managing the crisis would be the best way forward but, within the last year, it seems that he’s beginning to understand that this approach would compromise Israel’s national security.

It should be noted that, as prime minister, Netanyahu teeters between two camps in his coalition. The first being the “neo-Zionist” camp, a religiously inflected extremist view for the Land of Israel and justifying the settlement project as messianic. This camp is the smaller of the two and consists about one-fifth of the Israeli population.

The second camp is more of a digressive one. It believes that Israel doesn’t have a peace partner and that Arab leaders are determined to destroy Israel and will act in that way based on their capability. To support that argument, this camp usually cites the tragedies of Jewish history as reasons not to negotiate with their Palestinian counterparts.

Which camp Netanyahu is in at the moment is anybody’s guess, but neither is amenable to a realistic peace process. Yet, Netanyahu’s recent actions would suggest that he is cooking something up.

A couple of years ago, Foreign Minister Avigdor Lieberman suggested that the main regional players should concur on any agreement between the Israelis and the Palestinians. It seems that Netanyahu was listening.

With Defense Minister Moshe Ya’alon’s open conflict with Netanyahu, it was the perfect moment. In May, Netanyahu sacked Ya’alon and appointed Lieberman as defense minister in a theatrical manner.

Shortly thereafter, after “secretly” talking to Saudi Arabia, Netanyahu made amends with Turkey by signing a reconciliation deal. Subsequently, the Egyptian foreign minister arrived in Israel to discuss the Turkish deal, but also to discuss the Palestinian question.

So, with the main Sunni states (including Jordan) having better relations with Israel, Netanyahu shifted his focus to the Shiite states. However, having no ties with Iran and its Shiite allies, Netanyahu set his sights on Moscow as the intermediary.

Moscow isn’t the perfect country to broker with Iran as those mutual ties are often strained and overlap mostly because Russia and Iran seek to ensure that the Assad regime remains in power in Syria. Yet, Russia is the best option considering that the Americans are far more estranged from Iran and the two countries lack formal diplomatic relations.

The Americans also have all but given up on the Israeli-Palestinian peace process and the Europeans recently failed to set up talks between the two sides.

So, Netanyahu and Russian President Vladimir Putin met for the fourth time in a year, largely over security concerns about the war in Syria. But they likely discussed other matters, such as the Israeli-Palestinian peace process. In recent weeks, it has become public that Netanyahu and Palestinian Authority Chairman Mahmoud Abbas will have talks at the Kremlin.

It’s unclear if some “Moscow Accords” could work, though it may be the last, best hope. Much depends on whether Netanyahu genuinely seeks some form of agreement or if this new “regional peace plan” is just another ploy for buying time.

However, with Middle East beset with sectarian conflict and the chaos spilling into Europe, where there has been a rise in anti-Semitism and ultra-nationalism, Netanyahu might recognize the urgency of the moment and the grave threat to Israel’s basic national security if the West turns against the Zionist project.

For a two-state peace process to work, both Israel and a future Palestinian state (Gaza, the West Bank, and East Jerusalem) need firm borders to avert a potential civil war, which would be in no one’s interest. Yet, Netanyahu has deceived Israelis and the international community before by dangling hopes for meaningful negotiations and then finding reasons why they could not go forward.

Further complicating the situation is Washington’s New Cold War with Russia, which seeks to portray every action in Moscow as negative. In this case, however, Washington should recognize that Moscow providing a platform for Israeli-Palestinian peace talks is a positive act.

Zach Battat is a Junior Editor for Global Brief and a PhD Candidate in Middle Eastern & African History at the Zvi Yavetz School of Historical Studies at Tel Aviv University.

17 comments for “Behind the Russian-Israeli Detente”