Exclusive: U.S. officials are pushing a dubious new scheme to “unify” a shattered Libya, but the political risk at home is that voters will finally realize Hillary Clinton’s responsibility for the mess, writes Robert Parry.

Hillary Clinton’s signature project as Secretary of State – the “regime change” in Libya – is now sliding from the tragic to the tragicomic as her successors in the Obama administration adopt increasingly desperate strategies for imposing some kind of order on the once-prosperous North African country torn by civil war since Clinton pushed for the overthrow and murder of longtime Libyan ruler Muammar Gaddafi in 2011.

The problem that Clinton did much to create has grown more dangerous since Islamic State terrorists have gained a foothold in Sirte and begun their characteristic beheading of “infidels” as well as their plotting for terror attacks in nearby Europe.

There is also desperation among some Obama administration officials because the worsening Libyan fiasco threatens to undermine not only President Barack Obama’s legacy but Clinton’s drive for the Democratic presidential nomination and then the White House. So, the officials felt they had no choice but to throw caution to the wind or — to mix metaphors — some Hail Mary passes.

The latest daring move was a sea landing in Tripoli by the U.S./U.N-formulated “unity government,” which was cobbled together by Western officials in hotel rooms in Morocco and Tunisia. But instead of “unity,” the arrival by sea threatened to bring more disunity and war by seeking to muscle aside two rival governments.

The sea landing at a naval base in Tripoli became necessary because one of those rival governments refused to let the “unity” officials fly into Libya’s capital. So, instead, the “unity” leaders entered Libya by boat from Tunisia and are currently operating from the naval base where they landed.

With this unusual move, the Obama administration is reminding longtime national security analysts of other fiascos in which Washington sought to decide the futures of other countries by shaping a government externally, as with the Nicaraguan Contras in the 1980s and the Iraqi National Congress in 2003, and then imposing those chosen leaders on the locals.

(When I heard about the sea landing, I flashed back on images of Gen. Douglas MacArthur splashing ashore as he returned to the Philippines in World War II.)

But the new mystery is how this Libyan “unity government” expects to convince its rivals to accept its legitimacy without the military muscle to actually take over governance across Libya.

The Obama administration risks simply introducing a third rival government into the mix. Though the “unity government” drew participants from the other two governments, U.S. resistance to incorporating several key figures, including Gen. Khalifa Haftar, a military strongman in eastern Libya, has threatened to simply extend and possibly expand the civil war. 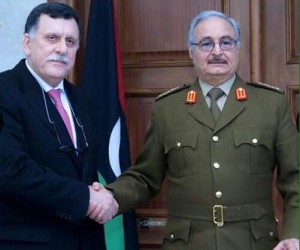 Immediately after being selected as Prime Minister of the U.N./U.S.-arranged “unity government” Fayez Sirraj reached out to Gen. Khalifa Haftar on Jan. 30, 2016, a move that upset U.S. officials who favored isolating Haftar.

The U.S. scheme for establishing the authority of the “unity government” centers on using the $85 billion or so in foreign reserves in Libya’s Central Bank to bring other Libyan leaders onboard. But that strategy may test the question of whether the pen – poised over the Central Bank’s check book – is mightier than the sword, since the militias associated with the rival regimes have plenty of weapons.

Besides the carrot of handing out cash to compliant Libyan politicians and fighters, the Obama administration also is waving a stick, threatening to hit recalcitrant Libyans with financial sanctions or labeling them “terrorists” with all the legal and other dangers that such a designation carries.

But can these tactics – bribery and threats – actually unify a deeply divided Libya, especially when some of the powerful factions are Islamist and see their role as more than strictly political, though the Islamist faction in Tripoli is also opposed to the Islamic State?

I’m told that another unity plan that drew wider support from the competing factions and included Haftar as Libya’s new commander-in-chief was rejected by U.S. officials because of fears that Haftar might become another uncontrollable strongman like Gaddafi.

Nevertheless, Haftar and his troops are considered an important element in taking on the Islamic State and, according to intelligence sources, are already collaborating with U.S. and European special forces in that fight.

After the sea landing on Wednesday, the “unity government” began holding official meetings on Thursday, but inside the heavily guard naval base. How the “unity” Prime Minister Fayez Sirraj and six other members of the Presidency Council can extend their authority across Tripoli and then across Libya clearly remained a work in progress, however. 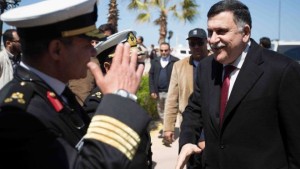 Prime Minister Fayez Sirraj of Libya’s new Government of National Accord, as selected by U.N. and U.S. officials, is welcomed by naval officers after landing in Tripoli.

The image of these “unity” officials, representing what’s called the Government of National Accord, holed up with their backs to the sea at a naval base, unable to dispatch their subordinates to take control of government buildings and ministries, recalls how the previous internationally recognized government, the House of Representatives or HOR, met on a cruise ship in Tobruk in the east.

Meanwhile, HOR’s chief rival, the General National Congress, renamed the National Salvation government, insisted on its legitimacy in Tripoli, but its control, too, was limited to several Libyan cities.

On Wednesday, National Salvation leader Khalifa Ghwell called the “unity” officials at the naval base “infiltrators” and demanded their surrender. Representatives of the “unity government” then threatened to deliver its rivals’ names to Interpol and the U.N. for “supporting terrorism.”

On Friday, the European Union imposed asset freezes on Ghwell and the leaders of the rival parliaments in Tripoli and in Tobruk. According to some accounts, the mix of carrots and sticks has achieved some progress for the “unity government” as 10 towns and cities in western Libya indicated their support for the new leadership.

Shortly after being selected by U.S. and U.N. officials to head the “unity government,” Sirraj reached out to Haftar in a meeting on Jan. 30, 2016, but the move upset U.S. officials who favored isolating Haftar from the new government.

The success or failure of this latest Obama administration effort to impose some order on Libya – and get the participants in the civil war to concentrate their fire on the Islamic State – could have consequences politically in the United States as well.

The continuing crisis threatens to remind Democratic primary voters about Hillary Clinton’s role in sparking the chaos in 2011 when she pressured President Obama to counter a military offensive by Gaddafi against what he called Islamic terrorists operating in the east.

Though Clinton and other “liberal interventionists” around Obama insisted that the goal was simply to protect Libyans from a possible slaughter, the U.S.-backed airstrikes inside Libya quickly expanded into a “regime change” operation, slaughtering much of the Libyan army.

Clinton’s State Department email exchanges revealed that her aides saw the Libyan war as a chance to pronounce a “Clinton doctrine,” bragging about how Clinton’s clever use of “smart power” could get rid of demonized foreign leaders like Gaddafi. But the Clinton team was thwarted when President Obama seized the spotlight when Gaddafi’s government fell.

But Clinton didn’t miss a second chance to take credit on Oct. 20, 2011, after militants captured Gaddafi, sodomized him with a knife and then murdered him. Appearing on a TV interview, Clinton celebrated Gaddafi’s demise with the quip, “we came; we saw; he died.”

However, with Gaddafi and his largely secular regime out of the way, Islamic militants expanded their power over the country. Some were terrorists, just as Gaddafi had warned.

One Islamic terror group attacked the U.S. consulate in Benghazi on Sept. 11, 2012, killing U.S. Ambassador Christopher Stevens and three other American personnel, an incident that Clinton called the worst moment of her four-year tenure as Secretary of State.

As the violence spread, the United States and other Western countries abandoned their embassies in Tripoli. Once prosperous with many social services, Libya descended into the category of failed state with the Islamic State taking advantage of the power vacuum to seize control of Sirte and other territory. In one grisly incident, Islamic State militants marched Coptic Christians onto a beach and beheaded them.

Yet, on the campaign trail, Clinton continues to defend her judgment in instigating the Libyan war. She claims that Gaddafi had “American blood on his hands,” although she doesn’t spell out exactly what she’s referring to. There remain serious questions about the two primary incidents blamed on Libya in which Americans died – the 1986 La Belle bombing in Berlin and the bombing of Pan Am Flight 103 over Lockerbie, Scotland, in 1988.

But whatever Gaddafi’s guilt in that earlier era, he renounced terrorism during George W. Bush’s presidency and surrendered his unconventional military arsenal. He even assisted Bush’s “war on terror.” So, Gaddafi’s grisly fate has become a cautionary tale for what can happen to a leader who makes major security concessions to the United States.

The aftermath of the Clinton-instigated “regime change” in Libya also shows how little Clinton and other U.S. officials learned from the Iraq War disaster. Clinton has rejected any comparisons between her vote for the Iraq War in 2002 and her orchestration of the Libyan war in 2011, saying that “conflating” them is wrong. She also has sought to shift blame onto European allies who also pushed for the war.

Though her Democratic rival, Sen. Bernie Sanders, hasn’t highlighted her key role in the Libya fiasco, Clinton can expect a tougher approach from the Republicans if she wins the nomination. The problem with the Republicans, however, is that they have obsessed over the details of the Benghazi incident, spinning all sorts of conspiracy theories, missing the forest for the trees.

Clinton’s ultimate vulnerability on Libya is that she was a principal author of another disastrous “regime change” that has spread chaos not only across the Middle East and North Africa but into Europe, where the entire European Union project, a major post-World War II accomplishment, is now in danger.

Clinton may claim she has lots of foreign policy experience, but the hard truth is that much of her experience has involved making grievous mistakes and bloody miscalculations.

← The ‘Hybrid War’ of Economic Sanctions
How Israeli Propaganda Succeeds →