Iran’s Supreme Leader Ali Khamenei told a large group of people in the holy city of Mashhad on Sunday that “The Americans did not act on what they promised in the [Iranian] nuclear accord [the JCPOA]; they did not do what they should have done. According to Foreign Minister [Javad Zarif], they brought something on paper but prevented materialization of the objectives of the Islamic Republic of Iran through many diversionary ways.”

This statement during the Supreme Leader’s key Nowruz (New Year) address should be understood as a flashing amber light: it was no rhetorical flourish. And it was not a simple dig at America (as some may suppose). It was perhaps more of a gentle warning to the Iranian government to “take care” of the possible political consequences.

What is happening is significant: for whatever motive, the U.S. Treasury is busy emptying much of the JCPOA sanctions relief of any real substance (and their motive is something which deserves careful attention). The Supreme Leader also noted that Iran is experiencing difficulties in repatriating its formerly frozen, external funds.

U.S. Treasury officials, since “implementation” day, have been doing the rounds, warning European banks that the U.S. sanctions on Iran remain in place, and that European banks should not think, even for a second, of tapping the dollar or euro bond markets in order to finance trade with Iran, or to become involved with financing infrastructure projects in Iran.

Banks well understand the message: touch Iranian commerce and you will be whacked with a billion dollar fine – against which there is no appeal, no clear legal framework – and no argument countenanced.  The banks (understandably) are shying off. Not a single bank or financial lending institution turned up when Iranian President Hassan Rouhani visited Paris to hold meetings with the local business élite.

The influential Keyhan Iranian newspaper wrote on March 14 on this matter that: “Speaking at the UN General Assembly session in September, Rouhani stated: ‘Today a new phase of relations has started in Iran’s relations with the world.’ He also stated in a live radio and television discussion with the people on 23 Tir: ‘The step-by-step implementation of this document could slowly remove the bricks of the wall of mistrust.’”

Keyhan continues: “These remarks were made at a time when the Western side, headed by America, does not have any intention to remove or even shorten the wall of mistrust between itself and Iran. … Moreover, they are delaying the implementation of their JCPOA commitments. Lifting the sanctions has remained merely as a promise on a piece of paper, so much so that it has roused the protest of Iranian politicians.

“The American side is promoting conditions in such a way that today even European banks and companies do not dare to establish financial relations with Iran – since all of them fear America’s reaction in the form of sanctions [imposed on those same banks]. Actually, the reason for the delay in the commencement of the European banks’ financial cooperation with the Iranian banks and the failure to facilitate banking and economic transactions, is because many of the American sanctions are still in place, and Iranian banks’ financial transactions are [still] facing restrictions. Moreover, given their continuing fear of the biting legislations and penalties for violations of the Americans’ old sanctions, European financial institutions are concerned about violating the American sanctions that continue to be in force …

Here Keyhan is specifically referring to Susan Rice’s observation to Jeffrey Goldberg in the Atlantic that, “The Iran deal was never primarily about trying to open a new era of relations between the US and Iran. The aim was very simply to make a dangerous country less dangerous. No one had any expectation that Iran would be a more benign actor.”

Keyhan continues: “Any action on the international scene calls for suitable and appropriate reaction. Therefore, we cannot expect a government like the US administration that seizes every single opportunity to restrict our county, to lift the sanctions. Rice’s recent comments are only a small part of the increasing anti-Iranian rhetoric of the American officials in recent months. These remarks should actually be regarded as a sign … that the dream of the JCPOA is nothing but wishful thinking and far from reality.” (Emphasis added).

The Supreme Leader’s nudge therefore was intended for the ears of the government: Do not build too much politically on this accord: beware its foundations may turn out to be built on sand.

Recently U.S. Treasury Secretary Jacob Lew gave a talk at Carnegie, on the Evolution of Sanctions and Lessons for the Future, on which David Ignatius commented: “Economic sanctions have become the ‘silver bullet’ of American foreign policy over the past decade, because they’re cheaper and more effective in compelling adversaries than traditional military power. But Jack Lew warns of a ‘risk of overuse’ that could neuter the sanctions weapon and harm America. His caution against overuse comes as some Republican members of Congress are fighting to maintain U.S. sanctions on the Iranian nuclear program despite last year’s deal limiting that Iranian threat.” 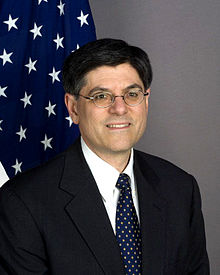 So what is going on here? If Lew is warning against sanction overreach, why is it that it is precisely his department that is the one that is so assiduously undermining sanctions relief for Iran – “particularly since Lew’s larger point is that sanctions won’t work if countries don’t get the reward they were promised — in the removal of sanctions — once they accede to U.S. Demands”, in the paraphrase by Ignatius himself?

One reason for this apparent contradiction implicit in Lew’s remarks probably is China: Recall that when China’s stock markets were in freefall and hemorrhaging foreign exchange, as it sought to support the Yuan – China blamed the U.S. Fed (U.S. Reserve Bank) for its problems – and promptly was derided for making such an “outlandish” accusation.

Actually, what the Fed was then doing was stating its intent to raise interest rates (for the best of motives naturally!) – just as those, such as Goldman Sachs, have been advising. U.S. Corporate and bank profits are sliding badly, and in “times of financial depletion,” as the old adage goes, “bringing capital home becomes the priority” – and a strong dollar does exactly that.

But the Peoples’ Bank of China (PBOC) did a bit more than just whine about the Fed actions, it reacted:  It allowed the Yuan to weaken, which induced turmoil across a global financial world (already concerned about China’s economic slowing); then raised the Yuan value to squeeze out speculation, betting on further falls in the Yuan; then let it weaken again as the Fed comments started to slide in favor of interest rate hikes, and a strong dollar – until finally, as Zero Hedge has noted: 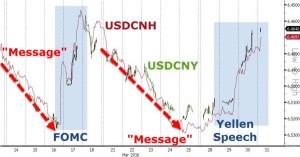 Zerohedge: And since Janet delivered, PBOC has strengthened the Yuan Fix by the most since 2005!!

“It appeared the messaging from The People’s Bank Of China to The Fed was heard loud and understood. Having exercised its will to weaken the Yuan (implying turmoil is possible), Janet Yellen (Fed Chair) delivered the dovish goods [i.e. indicated that global conditions trumped the advice of the likes of Goldman Sachs to strengthen the dollar], and so China ‘allowed’ the Yuan to rally back. In a double-whammy for everyone involved, the biggest 3-day strengthening of the Yuan fix since 2005 also pushed the Yuan forwards, back to their richest relative to spot since Aug 2014 – once again showing their might against the dastardly speculative shorts.”

In short, the Ignatius’s “silver bullet” of foreign policy (the U.S. Treasury Wars against any potential competitor to U.S. political or financial hegemony) is facing a growing “hybrid” financial war, just as NATO has been complaining that it is having to adjust to “hybrid” conventional war – from the likes of Russia.

So, as the U.S. tries to expand its reach, for example by claiming legal jurisdiction over the Bank of China, and by blacklisting one of China’s largest telecom companies, thus forbidding any U.S. company from doing business with China’s ZTE, China is pushing back. It has just demonstrated convincingly that U.S. Treasury “silver bullets” can fall short. 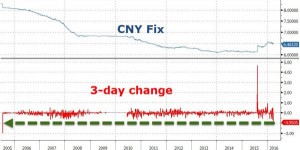 Zerohedge: Crushing shorts as Yuan forwards collapse back to their ‘richest’ relative to spot since Aug 2014

This, we think, may have been Lew’s point — one directed, possibly, at Congress, which has become truly passionate about its new-found “neutron bomb” (as a former Treasury official described its geo-financial warfare).

In respect to Russia, this is important: Russia and America seem to be edging towards some sort of “grand bargain” over Syria (and possibly Ukraine too), which is likely to involve the Europeans lifting, in mid-2016, their sanctions imposed on Russia. But again, the U.S. is likely nonetheless to maintain its own sanctions (or even add to them, as some in the U.S. Congress are arguing). 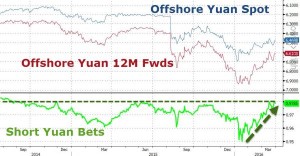 So, if Russia, like Iran and China become disenchanted with promises of U.S. sanctions relaxation – then, as the Keyhan author noted, a suitable and appropriate (i.e. adverse) reaction, will ensue.

What the Fed and Lew seem to have assimilated is that the U.S. and European economies are now so vulnerable and volatile that China and Russia can, as it were, whack-back at America – especially where China and Russia co-ordinate strategically. Yellen specifically signaled “weakening world growth” and “less confidence in the renormalization process” as reasons for the Fed backtrack.

Ironically, David Ignatius in his article gives the game away: Lew is not going soft, saying that the US needs to use its tools more prudently; far from it. His point is different, and Ignatius exposes it inadvertently:

“U.S. power flows from our unmatched military might, yes. But in a deeper way, it’s a product of the dominance of the U.S. economy. Anything that expands the reach of U.S. markets — such as the Trans-Pacific Partnership in trade, for example — adds to the arsenal of U.S. power. Conversely, U.S. power is limited by measures that drive business away from America, or allow other nations to build a rival financial architecture that’s less encumbered by a smorgasbord of sanctions.”

This latter point precisely is what is frightening Lew and Ignatius. The tables are turning: in fact, the U.S. and Europe may be becoming more vulnerable to retaliation (e.g. Europe, with Russia’s retaliatory sanctions on European agricultural products) than China and Russia are, to unilateral Treasury or Fed warfare.

This is the new hybrid war (and not the hot air issuing from NATO). Lew and Ignatius know that a parallel “architecture” is under construction, and that Congress’ addiction to new sanctions is just speeding it into place.

So, why then is the U.S. Treasury so zealous in undermining the effectiveness of JCPOA’s agreed lifting of sanctions? Well, probably because Iran has less leverage over the global financial system than either China or Russia. But also perhaps, because “Iran sanctions” are (erroneously) viewed by U.S. leaders as the Treasury’s “jewel in its crown” of geo-financial success.

What may be missing from this hubristic interpretation, however, is the understanding that Iran’s experience will not be lost on the others, nor on the SCO when it convenes its next meetings on how to combat Western “color revolution” operations (with Iran likely joining that organization as a member, rather than an observer, this summer).

Alastair Crooke is a British diplomat who was a senior figure in British intelligence and in European Union diplomacy. He is the founder and director of the Conflicts Forum, which advocates for engagement between political Islam and the West. [This article previously appeared at the Conflicts Forum’s Web site and is republished with permission. Copyright Conflicts Forum ­- not to be reprinted, reproduced or re-circulated without prior permission. Please contact CF with any queries.]

10 comments for “The ‘Hybrid War’ of Economic Sanctions”