Exclusive: President Obama, with his characteristic diffidence, has announced his “liberation” from the Washington foreign-policy “playbook,” but the national security elite is already striking back, writes Gareth Porter.

The biggest story in Jeffrey Goldberg’s 20,000-word report on “The Obama Doctrine” is President Barack Obama’s open break with the foreign policy establishment.

The critique of orthodox national security policy thinking that Obama outlined in interviews with Goldberg goes farther than anything delivered on the record by a sitting president. It showed that Obama’s view on how to define and advance U.S. “national security” diverges sharply from those of the orthodox views of national security bureaucracy and Washington foreign policy think tanks on U.S. “credibility,” the real interests the United States in the Middle East and how the United States should respond to terrorism.

It was the controversy surrounding his decision in the 2013 Syrian crisis not to authorize airstrikes against government forces that provoked Obama to go public with his position in that broader struggle. The foreign policy elite in Washington has issued a steady drumbeat of opinion pieces portraying Obama’s failure to launch a cruise missile attack against the Syrian air force and its air defense system in 2013 as a major blow to the U.S. role in the world because it forfeited U.S. “credibility.”

Richard Haass, who is president of the Council on Foreign Relations and the closest thing to a spokesman for the foreign policy establishment, summed up the elite’s attitude toward Obama’s decision in Syria in a Feb. 23 tweet. Haass suggested that Obama’s decision not to bomb Assad regime targets was on par with the Bush administration’s U.S. invasion of Iraq. In his tweet, Haass linked to another attack on Obama’s decision by Laurent Fabius, the recently retired former French Foreign Minister. On Twitter, Haass wrote: “2003 #Iraq war error of commission; not enforcing #Syria red line error of omission. fair debate which more costly. http://nyti.ms/1oEOfjm “

But the more important struggle over that decision was played out within the administration between Obama and Secretary of State John Kerry, who led the charge in pressing the President to carry out cruise missile strikes against Assad regime military targets over the its alleged responsibility for the Aug. 21, 2013 Sarin attack.

“There’s a playbook that presidents are supposed to follow,” Obama told Goldberg. “[T]he playbook prescribes responses to different events and those responses tend to be militarized responses.”

Such a “playbook” can be “a trap that can lead to bad decisions,” Obama continued. “In the midst of an international challenge like Syria, you can get judged harshly if you don’t follow the playbook, even if there are good reasons why if does not apply.”

Goldberg writes that Obama “had come to believe that he was walking into a trap – one laid both by allies and adversaries, and by conventional expectations of what an American president is supposed to do.” Obama was implying that he was being pushed into committing U.S. military force to the Syrian conflict less to eliminate the threat of chemical weapons than to tilt the military balance in favor of the opposition and to support “regime change” – something Obama did not want to do.

John Kerry made no bones about his commitment to striking government military targets. In Senate testimony on Sept. 3, 2013, he referred 28 times to the idea that such strikes would “deter” Assad from further chemical weapon attacks but also “degrade” the government’s military capabilities. 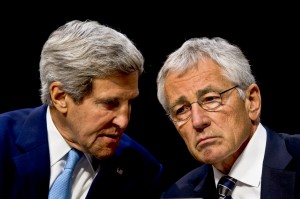 Defense Secretary Chuck Hagel, right, and Secretary of State John Kerry confer as they testify on the potential use of military force in Syria before the Senate Foreign Relations Committee in Washington, D.C., Sept. 3, 2013. (DOD photo by Erin A. Kirk-Cuomo)

A big reason Obama had begun to doubt the wisdom of a military response to the Aug. 21 attack, Goldberg reports, was that Director of National Intelligence James Clapper came to see Obama on the morning of Aug. 30 and told him that he could not say that the intelligence on  Assad having carried out the attack was a “slam dunk.”

Clapper’s reference was to the misguided assurance that CIA Director George Tenet reportedly gave President George W. Bush in 2002 that the intelligence community could back up Bush’s WMD claims about Iraq and that to do so would be a “slam dunk.” Clapper was saying that U.S. intelligence was not at all certain that the Assad regime was at fault for the attack. [For more on that topic, see Consortiumnews.com’s “Neocons Red-Faced over ‘Red Line.’“]

Over the past week, in the mainstream media’s denunciations of Obama’s comments in The Atlantic, this passage about Clapper’s uncertainty about who had launched the Sarin attack is ignored, although it would seem to be a key point. (See, for instance, Washington Post deputy editorial page editor Jackson Diehl’s op-ed on Monday or last Friday’s New York Times op-ed by columnist Roger Cohen.)

Furthermore, Obama did have an alternative to going to war in Syria that would eliminate any future threat of chemical weapons attacks by Assad’s government. In early September 2013, Obama reached an agreement with Russian President Vladimir Putin that Assad would give up his entire chemical weapons arsenal, while the United States would not go to war against Damascus and while Assad continued to deny a role in the Sarin attack.

In The Atlantic interviews, Obama’s harshest criticism is reserved for the cardinal rule of U.S. national security policy orthodoxy: that U.S. “credibility” for using military force must not be eroded by a failure to follow through on a threat to use it.

Of course, Obama’s so-called “red line” over chemical weapons was never explicitly defined as a threat to go to war over the issue, so it was a red herring argument for cruise missile strikes in Syria. But there was even substantial doubt inside the U.S. intelligence community that Assad had crossed the “red line.”

Obama responded to the “credibility” argument by Kerry and Ambassador to the U.N. Samantha Power at a White House meeting by pointing out that “dropping bombs on someone to prove that you’re willing to drop bombs on someone is just about the worst reason to use force.”

Obama recalled how difficult it was to reject the “credibility” argument at that moment, because, “to press the pause button at that moment … would cost me politically.”

The political threat to which Obama was referring was not merely a figment of his imagination. During his first year in office, his national security advisers had pressured him to accept a smaller and slower withdrawal from Iraq and a much larger military escalation in Afghanistan than Obama had believed justified by the facts. They had tightened the pressure by giving the mainstream news media anonymous accounts of the issue calculated to make Obama appear naive and irresolute.

Obama has also riled the foreign policy elite by renouncing its tenet of faith that the United States has vital interests in the Middle East because of its de facto – but not formal – alliances with Israel and Saudi Arabia. Obama clearly resents the pressure on him to treat both of those “allies” with kid gloves.

Goldberg writes that a “widely-held sentiment inside the White House is that many of the most prominent foreign policy think tanks in Washington are doing the bidding of their Arab and pro-Israeli funders.” Although Goldberg, the most openly pro-Israel big-name journalist in Washington, is obviously disapproving of that observation, it reflects the well-known reality of the funding of the leading think tanks focusing on the Middle East.

Obama rejected the idea of giving unconditional support to the Saudis in their sectarian conflicts, because “[O]ur Gulf partners, our traditional friends, do not have the ability to put out the flames on their own or decisively win on their own,” so such unconditional support “would mean that we have to start coming in and using our military power to settle scores. And that would be in the interest neither of the United States nor of the Middle East.”

Yet Obama has continued to give de facto support to those very sectarian Saudi policies in Syria and Yemen, which have destabilized those countries but which key U.S. national security officials have championed. Just last week, the New York Times revealed that John Kerry had had been the a “forceful advocate” last year of the view in that the United States should support the war the Saudis were planning to launch against Yemen, because the Saudi had questioned American “priorities” in the region in light of Obama’s negotiating a nuclear agreement with Iran.

Obama has also sharply dissented from orthodox thinking about terrorism, although not on the record. Goldberg writes that Obama “frequently reminds his staff that terrorism takes far fewer lives in America than hand guns, car accidents and falls in bathtubs.” That view has scandalized his national security advisers, who have been “fighting a constant rear-guard action,” according to Goldberg, “to keep Obama from placing terrorism in what he considers its ‘proper’ perspective, out of concern that he will seem insensitive to the fears of the American people.”

Those reported remarks by Obama to his staff are consistent with his statement in a May 2013 speech on terrorism policy that “[a]ny U.S. military action in foreign land risks creating more enemies….” He also said, “a perpetual war — through drones or Special Forces or troop deployments – will prove self-defeating and alter our country in troubling ways”.

Nevertheless, Obama has continued to preside over a vast increase in drone strikes in Pakistan, Afghanistan, Yemen and Somalia. The fact that he has voiced a perspective that directly contradicts his own administration’s actual policies on wars in Yemen and Syria as well as on counter-terrorism policy suggests that he has consistently compromised with senior national security officials, despite his misgivings, for political reasons.

That same pattern of behavior was evident in his response to the U.S. military’s request for a steep increase in U.S. combat forces in Afghanistan in 2009. He had privately disagreed sharply with his national security team over the issue, even arguing that Afghanistan was far less important to U.S. national security than the future of Pakistan, as revealed by Bob Woodward’s Obama’s Wars.

But in the end Obama reached a compromise between his own view of what should be done and the demands pressed on him by his national security team. The fact that Secretary of Defense Robert Gates and Secretary of State Hillary Clinton were both supporting the military was central to his calculation of the political cost he anticipated if he rejected the escalation.

Obama’s readiness to go along with policies about which he had serious misgivings – with one signal exception (bombing Syria in 2013) – bears similarity to the political dynamic that propelled the United States into the Vietnam War. Both John F. Kennedy and Lyndon Johnson said privately that South Vietnam was not worth a war, but both agreed to major steps toward war under pressure from the senior advisers, including their Secretaries of State and Defense.

The new revelations of Obama’s disenchantment with foreign policy orthodoxy on the use of force illuminate an enduring structural problem of presidents perceiving their national security officials as having the power to impose high political costs on them if their demands for war were rejected. On the other hand, Obama’s public break-up with the national security elite appears to represents a new stage in the politics of national security in which broader resistance to those powerful interests may possibly be feasible.

Gareth Porter is an independent investigative journalist and winner of the 2012 Gellhorn Prize for journalism. He is the author of Manufactured Crisis: The Untold Story of the Iran Nuclear Scare.

← Misunderstanding the Terror Threat
Start of a New World War →

55 comments for “Obama’s Break with the Establishment”