Exclusive: Official Washington’s neocons love to condemn President Obama for not enforcing his “red line” after a sarin attack in Syria in 2013, even though one neocon now admits that U.S. intelligence lacked the proof, writes Robert Parry.

Jeffrey Goldberg of The Atlantic has penned an opus on President Barack Obama’s foreign policy which starts with a long segment dissecting Obama’s supposed failure to enforce his “red line” against Syrian President Bashar al-Assad using sarin gas to kill hundreds of civilians outside Damascus on Aug. 21, 2013. For Official Washington’s foreign-policy elite, Obama’s flinching from a bombing campaign against Assad was a historical inflection point for which Obama deserves hearty condemnation.

But if you read far enough into this story of Obama’s “feckless” behavior, you encounter a curious admission from Goldberg: that U.S. intelligence was unsure whether Assad was responsible for the attack. 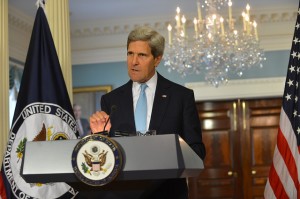 As Goldberg writes, “Obama was … unsettled by a surprise visit early in the week from James Clapper, his director of national intelligence, who interrupted the President’s Daily Brief, the threat report Obama receives each morning from Clapper’s analysts, to make clear that the intelligence on Syria’s use of sarin gas, while robust, was not a ‘slam dunk.’

“He chose the term carefully. Clapper, the chief of an intelligence community traumatized by its failures in the run-up to the Iraq War, was not going to overpromise, in the manner of the onetime CIA director George Tenet, who famously guaranteed George W. Bush a ‘slam dunk’ in Iraq.”

What I was told by intelligence sources at the time was that the evidence against Assad was anything but a slam dunk. It was not even “robust,” as Goldberg insists. There were serious doubts among intelligence professionals about many of the “certainties” that Official Washington’s neocon-dominated foreign policy establishment had quickly accepted as true about the sarin attack, blaming Assad.

In the face of that “group think,” Clapper surely did not want to go too much against the grain – he’s far too timid a bureaucrat for that – but his analysts were balking at once again being pushed into justifying another hasty war.

This resistance from the U.S. intelligence community should have been easy to spot, except that the neocons were whipping Official Washington into another war stampede. They saw the sarin attack as the catalyst for another “regime change,” so the last thing they wanted was a sober analysis of the evidence. They wanted a “group think” to take hold and to bait a reluctant Obama into action by portraying him as a wimp if he didn’t start bombing right away.

The neocon strategy almost worked. Across Official Washington and the mainstream U.S. news media, there was a classic rush to judgment. However, when Secretary of State John Kerry made a bellicose case for war on Aug. 30, 2013, and released a supporting “government assessment,” what was most remarkable to me was that there was not a shred of verifiable evidence implicating Assad.

Indeed, it made little sense that Assad would have launched a sarin attack when United Nations inspectors had just arrived in Damascus to examine suspected chemical weapons cases that Assad was blaming on jihadist rebels.

The fact that Kerry had to rely on a new confection, called a “government assessment” prepared by political operatives rather than the traditional “intelligence assessment” expressing the consensus judgment of the 16 intelligence agencies, was a further tip-off that the U.S. intelligence community was not onboard. After Kerry’s speech, I reported on the startling lack of evidence in the “dodgy dossier.”

So, on Aug. 31, 2013, when Obama began to back away from the rush to war, the President deserved praise for showing reasonable caution. After all, what sense would it make to punish the Syrian government for launching a sarin attack if, in reality, the atrocity was carried out by someone else, in this case, one of the radical jihadist groups trying to trick the U.S. government into intervening in the war on their side?

It’s now clear that if Obama had launched a major bombing campaign against the Syrian military, he might have inadvertently cleared a path for Al Qaeda’s Nusra Front or the Islamic State to seize control of Damascus, touching off an even more devastating human catastrophe. But “regime change” in Syria was a neocon obsession, even if it carried the risk of terrorist groups gaining control of a major Middle Eastern nation.

In the weeks and months after the sarin attack, the case against Assad continued to crumble. The U.N. inspectors recovered only one rocket carrying sarin and it was incapable of traveling the distance that would have indicated that it was fired by the Syrian military. Then, investigative reporter Seymour Hersh reported in 2014 that intelligence officials had traced the attack to radical jihadists in apparent collaboration with Turkish intelligence. More recently, I’ve been told that U.S. intelligence now agrees with Hersh’s reporting.

In other words, Clapper’s recognition that there was no “slam dunk” case implicating Assad has been vindicated by subsequent evidence. But Official Washington’s foreign-policy elite simply can’t accept these findings, instead maintaining the myth that Assad flouted Obama’s “red line” and that Obama lost his nerve and thus undermined U.S. “credibility.” This myth is so beloved among neocons and their liberal-interventionist allies that it can’t be surrendered regardless of its lack of evidentiary support.

After all, admitting that another neocon “group think” was dangerously misguided – after the Iraq War WMD fiasco – might finally topple some of these self-important pundits from their endowed think-tank chairs. Americans might finally recognize that these pompous know-it-alls are really just vacuous know-nothings.

So, instead of an article praising Obama for his realism and restraint – for demanding hard evidence before launching another U.S. war in the Middle East – we get Jeffrey Goldberg’s opus analyzing why Obama chickened out on the “red line” and how that failure has impaired U.S. foreign policy.