When information becomes a weapon whether in geopolitics or domestic politics the democratic principle of an informed electorate is sacrificed, as is now the case in modern America, where some leaders pander to parts of the electorate that are disdainful of science, as ex-CIA analyst Paul R. Pillar observes.

It is unusual for a political leader to disavow truth-seeking as explicitly as Gov. Scott Walker of Wisconsin did when he tried to expunge from the longstanding mission statement of the University of Wisconsin a reference to “the search for truth” being a core purpose of the university.

Walker backed off, but only after public outrage and only with a retraction of his previous retraction that blamed the proposed change on a “drafting error.” The change in the mission statement was one part of a larger proposal by Walker that would slash much of the state’s subsidy of the university system. 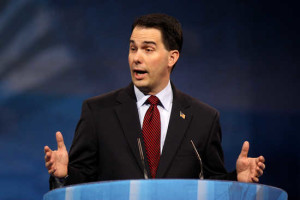 The prevailing interpretation about Walker’s moves is that striking blows against the elite intellectuals one finds on the campus of a leading university, and suggesting, as Walker did, that the university could adjust to budget cuts by increasing professors’ work loads, pleases a sector of the Republican primary electorate to which Walker is appealing in seeking a presidential nomination in 2016. The same interpretation could be applied to Walker’s recent refusal to say that he believes in evolution.

This interpretation is undoubtedly correct, but for a leader to turn his back on truth, or more precisely the search for truth, as directly as Walker has is also part of a larger disturbing pattern in Twenty-first Century America and American politics.

Although direct and explicit rejections of truth-seeking are rare, Walker does not provide the only examples. Another one that comes to mind was the proud declaration by an anonymous aide in George W. Bush’s administration (believed by many to be Karl Rove) that he and his colleagues were not part of the “reality-based community.”

Of course, rejection of reality and the truth by people in power, sometimes to a sweeping degree, is by no means an artifact of Twenty-first Century America. The Big Lie has long been a well-practiced technique of dictatorships abroad. But while such regimes have mangled and oppressed the truth, they have claimed to be pursuing it and acting in accordance with it. Even the department in George Orwell’s Oceania that dispensed lie-laden propaganda called itself the Ministry of Truth.

The more unabashed willingness we see today to stray from respect for the truth has multiple roots. One could explain much by looking at the sort of political calculations that Walker and his advisers are making and at the underlying demographics and value systems of the sector of the electorate to which they are appealing.

But there are some more widespread roots as well, some of which Joel Achenbach of the Washington Post identified in a recent article addressing why so many Americans are so dubious about science. The ubiquitous Internet, for example, “makes it easier than ever for science doubters to find their own information and experts.” Much of the turning away from truth does involve rejection of scientifically established patterns and causalities, with denial of climate change being perhaps the most obvious example.

It is rejecting the search for truth that is the most important and destructive phenomenon in question. Achenbach quotes the editor of the journal Science, who observes that science is not a body of facts but instead “a method for deciding whether what we choose to believe has a basis in the laws of nature or not.”

It is a way of searching for truth, a way that has long proven itself to be effective. The antithesis of science is to take something as fact because it is a tenet of a political ideology or a revealed religion to which one adheres.

Besides the influence of unquestioning adherence to political ideologies and revealed religions, some of the blame for diminished respect for the truth ought to go to the world of the arts and the increasingly artful, and unapologetic, way in which fiction and nonfiction get blended. A historical novel used to mean a story about fictional characters set against the backdrop of real events. Now it may mean attributing made-up words and actions to real people.

Occasionally, as with the portrayal of Lyndon Johnson in a recent movie about Martin Luther King, such attribution may become a matter of discussion and controversy. More often it is absorbed by much of the public as if it were fact. Many people believe significant falsehoods about real Americans and real American institutions because they saw them in an Oliver Stone movie.

Film directors and novelists blithely rationalize the confusion of fact and fiction by saying that they bend facts only to make larger and more profound points. In other words, they are saying that the truth doesn’t matter very much.

Political polarization in the current United States is another contributing factor. The partisan divide has nearly ended any search for better understanding of reality through a constructive dialogue between those with different points of view. And much of what is taken as fact by many adherents of one partisan camp or another is so taken merely because other people in the camp with which the person identifies say it is so. This is not a search for truth at all; it is just an expression of a creed. Perceived fact follows prescriptive ideology rather than the other way around.

The diminished respect for truth and the search for it has multiple bad consequences. Most obvious is that a lot of untruths are left floating around, free to become the basis for misguided policies. Another is that debates about public policy are rendered more confused and less effective by muddying the respective roles of facts and analysis, and description and prescription.

To see so much straying from a dedicated search for truth is dismaying, for reasons that go far beyond a university campus in Wisconsin.

(Disclosure: My son is a student at the University of Wisconsin at Madison. I thus have a personal interest in the university continuing to search for truth, as well as in the degrees it grants not being debased by the sort of degradation and decline that would result from big budget cuts. I also have an interest in what happens to out-of-state tuition rates, which the university chancellor says are sure to be hiked if the legislature approves Walker’s cuts. I do not know what Gov. Walker, who also has a son enrolled at UW-Madison, privately thinks about any of these things.)

13 comments for “Disdaining ‘the Search for Truth’”