Exclusive: Official Washington’s Ukraine narrative has been that it was all Vladimir Putin’s fault, that the Russian president staged the crisis to restore the Russian empire, a storyline that never made sense and is now being rearranged to explain why Putin is seeking peace, writes Robert Parry.

It’s always interesting when the New York Times promotes a false narrative as it has on Ukraine by blaming the crisis all on “Russian aggression” and then has to shift its storyline when events move in a different direction, like President Vladimir Putin’s recent peacemaking initiatives.

On Thursday, the Times explained Putin’s call for an extended ceasefire as a case of him caving in to U.S. pressure. Correspondents Andrew Roth and David S. Herszenhorn wrote: 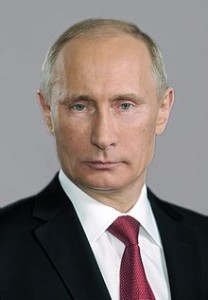 “Faced with the threat of additional economic sanctions from Washington, President Vladimir V. Putin of Russia discussed an extension of the cease-fire, which is to expire on Friday, in a telephone call with Chancellor Angela Merkel of Germany, President FranÃ§ois Hollande of France and Ukraine’s new president, Petro O. Poroshenko.”

The article then continued the tough-guy, ultimatum-threatening chest-pounding that has become de rigueur for the State Department and the mainstream U.S. news media. The Times article noted:

“The Obama administration has drawn up plans to escalate sanctions against Russia if it does not back the current peace plan by halting the flow of weapons and fighters across the Russian border. The sanctions could target some of Russia’s largest banks, or energy and defense firms.”

The Times also reported, without skepticism, the unverified allegations that the Russian government is supplying heavy weapons to the eastern Ukrainian separatists who rebelled after violent protests by western Ukrainians ousted elected President Viktor Yanukovych on Feb. 22.

The U.S. government has repeatedly made allegations about “Russian aggression” in eastern Ukraine but has failed to present any verifiable proof to support the claims. One State Department attempt, which involved getting the Times to run a lead article citing photos purportedly proving that Russian military personnel were operating in Ukraine, collapsed under scrutiny and was later retracted by the Times.

Nevertheless, the Times still conveys the State Department’s claims without noting the absence of evidence, itself evidence of the Times’ unstinting bias in its coverage of the Ukraine crisis. For instance, the Times reported:

“On Wednesday, Secretary of State John Kerry began a news conference at NATO in Brussels by calling for Mr. Putin ‘to stop the flow of weapons and fighters across the border.’ Mr. Kerry said that the missile launcher that brought down the [Ukrainian military] helicopter on Tuesday was Russian-made and urged Mr. Putin to call for separatist forces to lay down their arms. A senior administration official said Friday that several tanks under rebel possession had come from Russia.”

Normally, when one party in a dispute makes an allegation and fails to provide meaningful evidence to support it, news organizations add something like: “However, the claim could not be independently verified” or the Times might have noted that “similar claims by the State Department in the past have proven to be false.”

But the Times simply can’t seem to deviate from its four-month display of an extraordinary lack of balance, which brings us back to the Times’ attempt to explain Putin’s peacemaking as a development that could only be explained as him caving in to U.S. pressure. [For more on the Times’ bias, see Consortiumnews.com’s “NYT’s One-Sided Ukraine Narrative.” For more on Herszenhorn’s bias, see “Ukraine, Through the US Looking Glass.”]

There is, of course, an alternative explanation for Putin’s recent behavior: that he never sought the Ukraine crisis and surely did not plan it; it resulted, in part, from U.S. and European provocations designed to put Putin in a corner in his own corner of the world; Putin reacted to this Western maneuver but was always willing to compromise as long as the end result was not a strategic threat to Russia.

I’m told that Putin, like many historic Russian leaders, has wanted to see Russia accepted as a member of the First World and took personal pride in helping President Barack Obama defuse crises in Syria and Iran last year. Arguably, it was Putin’s assistance on those crises that made him a target of Washington’s still influential neocons who had hoped instead for U.S. bombing campaigns against Syria and Iran.

By late September 2013 on the heels of Obama rejecting plans to bomb Syria leading neocons, such as National Endowment for Democracy President Carl Gershman, identified Ukraine as a key piece on the chessboard to checkmate Putin. [See Consortiumnews.com’s “What Neocons Want from Ukraine Crisis.”]

The Ukraine crisis really emerged from the European Union’s offer of an association agreement that President Yanukovych was initially inclined to accept. But it was accompanied by harsh austerity demands from the International Monetary Fund, which would have made the hard life for the average Ukrainian even harder.

Because of those IMF demands and a more generous $15 billion loan offer from Russia, Yanukovych backed away from the EU association, angering many western Ukrainians and creating an opening for U.S. neocons, such as Assistant Secretary of State for European Affairs Victoria Nuland and Sen. John McCain, to urge on protests to unseat Yanukovych.

In February, as the Ukraine crisis worsened, Putin was preoccupied with the Winter Olympics in Sochi, but he went along with a compromise plan on Feb. 21 in which Yanukovych agreed to reduced powers and early elections (so he could be voted out of office) as well as to pull back the police. That opened the way for violent attacks by neo-Nazi militias who overran government buildings on Feb. 22 and forced Yanukovych and his officials to flee for their lives.

With the U.S. State Department endorsing the coup as “legitimate,” a right-wing government quickly took shape under the leadership of Nuland’s hand-picked prime minister, Arseniy Yatsenyuk. Four ministries were given to the neo-Nazis in appreciation of their key role in the coup, including the appointment of Andriy Parubiy as chief of national security.

The new regime immediately displayed hostility toward the ethnic Russians in the east and south, including sending wealthy “oligarchs” to serve as the new regional governors and dispatching neo-Nazi militias reconstituted as the National Guard to crackdown on dissent.

The regional government of Crimea, a longtime part of Russia and home of the Russian naval base at Sevastopol, organized a referendum to secede from Ukraine and to rejoin Russia, a move supported by Putin and aided by the thousands of Russian troops already in Crimea under a basing agreement with Ukraine.

Crimea’s secession was treated by the mainstream U.S. media as a Russian “invasion” and an act of “aggression,” though the reunification with Russia clearly had overwhelming support from the people of Crimea as expressed in the referendum and in opinion polls.

Still, across Official Washington, the narrative took hold that Putin had ginned up the Ukraine crisis so he could seize territory and begin to reconstitute the old Soviet Union. Right-wing and neocon pundits raised the specter of Putin attacking the Baltic states. The U.S. news media lost all perspective on the actual events in Ukraine.

The reality was that Putin was reacting to a Western provocation on his border, a coup d’etat to pry Ukraine away from its traditional relationship with its neighbor Russia and into the embrace of the European Union and NATO. Putin himself noted the threat to Russian national security if NATO’s nuclear-missile-bearing ships were berthed in Sevastopol.

From the beginning, Putin hoped to resolve this crisis through discussions with his erstwhile collaborator, Barack Obama, but with the U.S. media in a frenzy demonizing Putin Obama would not even come to the phone at first, I’m told. Afraid of being called “weak,” Obama followed the lead of the State Department’s hawks who were lusting for Cold War II.

Poroshenko and Putin found common ground in their desire to deescalate the crisis although neither leader has been able to fully control the hardliners, not Poroshenko in trying to rein in the Right Sektor which has taken a lead role in killing ethnic Russians in Odessa and other cities, nor Putin in convincing the separatists that they have a future in the post-coup Ukraine.

But Putin continues to signal support for Poroshenko’s stated intent to respect the rights of eastern Ukrainians by offering more self-rule and respecting their use of Russian as an official language. In a sign of good faith, Putin has even sought to rescind the permission from the Russian legislature to intervene militarily to protect ethnic Russians in Ukraine.

However, these developments created a dilemma for the New York Times and the rest of the mainstream U.S. news media. If the Ukraine crisis had been just an excuse for Putin to seize territory and revive the “Russian empire,” why would he be so eager to work out a peaceful settlement? The opposite should be true. If the MSM had it right, Putin would be escalating the crisis.

So, we now have this new version: Yes, Putin precipitated the Ukraine crisis so he could conquer Eastern Europe. But he backed down because of tough talk from Official Washington (including on the MSM’s op-ed pages). In other words, the MSM had it right but tough-guy-ism and the threat of sanctions scared Putin into retreat.

That this analysis makes little sense since it was the European Union that was most unnerved by the prospects of U.S.-driven sanctions disrupting Russia’s natural gas supplies and plunging the Continent into a recessionary relapse was of little regard to the U.S. press corps. The new false narrative was simply a necessary way to cover for the old false narrative.

It could never be acknowledged that the New York Times and the other esteemed U.S. journals had gotten another major international story wrong, that another “group think” had led the MSM down another rabbit hole of mistakes and misunderstanding. Instead, all that was needed was some creative tinkering with the storyline.