Exclusive: As the post-coup regime in Ukraine sends troops and paramilitaries to crack down on ethnic Russian protesters in the east, the U.S. news media continues to feed the American public a steady dose of anti-Russian propaganda, often wrapped in accusations of “Russian propaganda,” Robert Parry reports.

The acting president of the coup regime in Kiev announces that he is ordering an “anti-terrorist” operation against pro-Russian protesters in eastern Ukraine, while his national security chief says he has dispatched right-wing ultranationalist fighters who spearheaded the Feb. 22 coup that ousted elected President Viktor Yanukovych.

On Tuesday, Andriy Parubiy, head of the Ukrainian National Security Council, went on Twitter to declare, “Reserve unit of National Guard formed #Maidan Self-defense volunteers was sent to the front line this morning.” Parubiy was referring to the neo-Nazi militias that provided the organized muscle that overthrew Yanukovych, forcing him to flee for his life. Some of these militias have since been incorporated into security forces as “National Guard.” 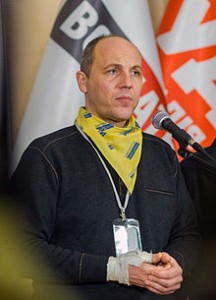 Parubiy himself is a well-known neo-Nazi, who founded the Social-National Party of Ukraine in 1991. The party blended radical Ukrainian nationalism with neo-Nazi symbols. Parubiy also formed a paramilitary spinoff, the Patriots of Ukraine, and defended the awarding of the title, “Hero of Ukraine,” to World War II Nazi collaborator Stepan Bandera, whose own paramilitary forces exterminated thousands of Jews and Poles in pursuit of a racially pure Ukraine.

During the months of protests aimed at overthrowing Yanukovych, Parubiy became the commandant of “Euromaidan,” the name for the Kiev uprising, and after the Feb. 22 coup Parubiy was one of four far-right Ukrainian nationalists given control of a ministry, i.e. national security.

But the U.S. press has played down his role because his neo-Nazism conflicts with Official Washington’s narrative that the neo-Nazis played little or no role in the “revolution.” References to neo-Nazis in the “interim government” are dismissed as “Russian propaganda.”

Yet there Parubiy was on Tuesday bragging that some of his neo-Nazi storm troopers renamed “National Guard” were now being sicced on rebellious eastern Ukraine as part of the Kiev government’s “anti-terrorist” operation.

The post-coup President Oleksandr Turchynov also warned that Ukraine was confronting a “colossal danger,” but he insisted that the suppression of the pro-Russian protesters would be treated as an “anti-terrorist” operation and not as a “civil war.” Everyone should understand by now that “anti-terror” suggests extrajudicial killings, torture and “counter-terror.”

Yet, with much of the Ukrainian military of dubious loyalty to the coup regime, the dispatch of the neo-Nazi militias from western Ukraine’s Right Sektor and Svoboda parties represents a significant development. Not only do the Ukrainian neo-Nazis consider the ethnic Russians an alien presence, but these right-wing militias are organized to wage street fighting as they did in the February uprising.

Historically, right-wing paramilitaries have played crucial roles in “counter-terror” campaigns around the world. In Central America in the 1980s, for instance, right-wing “death squads” did much of the dirty work for U.S.-backed military regimes as they crushed social protests and guerrilla movements.

The merging of the concept of “anti-terrorism” with right-wing paramilitaries represents a potentially frightening development for the people of eastern Ukraine. And much of this information about Turchynov’s comments and Parubiy’s tweet can be found in a New York Times’ dispatch from Ukraine.

However, on the Times’ front page on Wednesday was a bizarre story by David M. Herszenhorn accusing the Russian government of engaging in a propaganda war by making many of the same points that you could find albeit without the useful context about Parubiy’s neo-Nazi background in the same newspaper.

In the article entitled “Russia Is Quick To Bend Truth About Ukraine,” Herszenhorn mocked Russian Prime Minister Dmitri Medvedev for making a Facebook posting that “was bleak and full of dread,” including noting that “blood has been spilled in Ukraine again” and adding that “the threat of civil war looms.”

The Times article continued, “He [Medvedev] pleaded with Ukrainians to decide their own future ‘without usurpers, nationalists and bandits, without tanks or armored vehicles and without secret visits by the C.I.A. director.’ And so began another day of bluster and hyperbole, of the misinformation, exaggerations, conspiracy theories, overheated rhetoric and, occasionally, outright lies about the political crisis in Ukraine that have emanated from the highest echelons of the Kremlin and reverberated on state-controlled Russian television, hour after hour, day after day, week after week.”

This argumentative “news” story spilled from the front page to the top half of an inside page, but Herszenhorn never managed to mention that there was nothing false in what Medvedev said. Indeed, it was the much-maligned Russian press that first reported the secret visit of CIA Director John Brennan to Kiev.

Though the White House has since confirmed that report, Herszenhorn cites Medvedev’s reference to it in the context of “misinformation” and “conspiracy theories.” Nowhere in the long article does the Times inform its readers that, yes, the CIA director did make a secret visit to Ukraine last weekend. Presumably, that reality has now disappeared into the great memory hole along with the on-ground reporting from Feb. 22 about the key role of the neo-Nazi militias.

The neo-Nazis themselves have pretty much disappeared from Official Washington’s narrative, which now usually recounts the coup as simply a case of months of protests followed by Yanukovych’s decision to flee. Only occasionally, often buried deep in news articles with the context removed, can you find admissions of how the neo-Nazis spearheaded the coup.

For instance, on April 6, the New York Times published a human-interest profile of a Ukrainian named Yuri Marchuk who was wounded in clashes around Kiev’s Maidan square in February. You have to read far into the story to learn that Marchuk was a Svoboda leader from Lviv, which if you did your own research you would discover is a neo-Nazi stronghold where Ukrainian nationalists hold torch-light parades in honor of Nazi collaborator Stepan Bandera.

Without providing that context, the Times does mention that Lviv militants plundered a government weapons depot and dispatched 600 militants a day to do battle in Kiev. Marchuk also described how these well-organized militants, consisting of paramilitary brigades of 100 fighters each, launched the fateful attack against the police on Feb. 20, the battle where Marchuk was wounded and where the death toll suddenly spiked into scores of protesters and about a dozen police.

Marchuk later said he visited his comrades at the occupied City Hall. What the Times doesn’t mention is that City Hall was festooned with Nazi banners and even a Confederate battle flag as a tribute to white supremacy.

The Times touched on the inconvenient truth of the neo-Nazis again on April 12 in an article about the mysterious death of neo-Nazi leader Oleksandr Muzychko, who was killed during a shootout with police on March 24. The article quoted a local Right Sektor leader, Roman Koval, explaining the crucial role of his organization in carrying out the anti-Yanukovych coup.

“Ukraine’s February revolution, said Mr. Koval, would never have happened without Right Sector and other militant groups,” the Times wrote. Yet, that reality though actually reported in the New York Times has now become “Russian propaganda,” according to the New York Times.

This upside-down American narrative also ignores the well-documented interference of prominent U.S. officials in stirring up the protesters in Kiev, which is located in the western part of Ukraine and is thus more anti-Russian than eastern Ukraine where many ethnic Russians live and where Yanukovych had his political base.

Assistant Secretary of State for European Affairs Victoria Nuland was a cheerleader for the uprising, reminding Ukrainian business leaders that the United States had invested $5 billion in their “European aspirations,” discussing who should replace Yanukovych (her choice, Arseniy Yatsenyuk became the new prime minister), and literally passing out cookies to the protesters in the Maidan. (Nuland is married to neoconservative superstar Robert Kagan, a founder of the Project for the New American Century.)

During the protests, neocon Sen. John McCain, R-Arizona, took the stage with leaders of Svoboda surrounded by banners honoring Stepan Bandera and urged on the protesters. Even before the demonstrations began, prominent neocon Carl Gershman, president of the U.S.-funded National Endowment for Democracy, had dubbed Ukraine “the biggest prize.” [For more details, see Consortiumnews.com’s “What’s the Matter with John Kerry?”]

Indeed, in my four-plus decades in journalism, I have never seen a more thoroughly biased and misleading performance by the major U.S. news media. Even during the days of Ronald Reagan when much of the government’s modern propaganda structure was created there was more independence in major news outlets. There were media stampedes off the reality cliff during George H.W. Bush’s Persian Gulf War and George W. Bush’s Iraq War, both of which were marked by demonstrably false claims that were readily swallowed by the big U.S. news outlets.

But there is something utterly Orwellian in the current coverage of the Ukraine crisis, including accusing others of “propaganda” when their accounts though surely not perfect are much more honest and more accurate than what the U.S. press corps has been producing.

There’s also the added risk that this latest failure by the U.S. press corps is occurring on the border of Russia, a nuclear-armed state that along with the United States could exterminate all life on the planet. The biased U.S. news coverage is now feeding into political demands to send U.S. military aid to Ukraine’s coup regime.

The casualness of this propaganda as it spreads across the U.S. media spectrum from Fox News to MSNBC, from the Washington Post to the New York Times is not just wretched journalism but it is reckless malfeasance jeopardizing the lives of many Ukrainians and the future of the planet.

← Rigging the Game Against Palestinians
In Case You Missed… →

25 comments for “Ukraine, Through the US Looking Glass”