The uproar in the mainstream U.S. news media over the barbarity of Islamic militants in Iraq downplays or ignores the brutality of the U.S. invasion and occupation that unleashed the ethnic and sectarian hatreds in the first place, as Danny Schechter notes.

“The barbarians are at the gates,” says the headline of an article about the Iraq crisis by Patrick Cockburn, the veteran Middle East correspondent for the UK Independent. A fierce critic of the U.S.-British war on Iraq, Cockburn is now urging the U.S. and Iran to collaborate in stopping the forces of ISIS (the Islamic State of Iraq and Syria) that are sweeping through Iraq, a country that Cockburn loves more than the despotic politicians who have run it now or then.

The American media has taken up the cry for U.S. intervention with lurid coverage of ISIS, a force at first labeled “terrorists” and now “insurgents” or “militants.” The difference is that ISIS now seizes and holds territory, operating like an army, not just killing civilians to spread fear. ISIS is said to be a spinoff of al-Qaeda but we don’t know how or if al-Qaeda still exists. Separating truth from propaganda has never been more difficult. 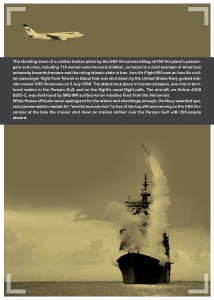 An Iranian poster commemorating the shooting down of an Iranian civilian airliner by the USS Vincennes on July 3, 1988, killing all 290 people onboard.

Even as ISIS portrays itself more as a corporation than a gang of brigands, all we see or hear about in the U.S. media are bloody killings and beheadings as if savagery is uniquely to be found in the Islamic world.

Never mind the reporting of the McClatchy newspapers explaining that “the Islamic State of Iraq and Syria sprang from a largely self-funded, corporation-style prototype. The militant group [that ISIS leader Abu Bakr al-] Baghdadi inherited had in place a sophisticated bureaucracy that was almost obsessive about record-keeping.

“Its middle-managers detailed, for example, the number of wives and children each fighter had, to gauge compensation rates upon death or capture, and listed expenditures in neat Excel spreadsheets that noted payments to an ‘assassination platoon’ and ‘Al Mustafa Explosives Company.’”

Too bad, our corporations don’t disclose, much less quantify, the metrics of the negative social impacts they cause and what that costs society or the world.

The more lurid the reporting on the butchery now underway, the more we forget that possibly one million-plus died as a result of the 2003 U.S. invasion and occupation or how the organized violence of the state inevitably inspires a violence of resistance. It is a violence that anti-colonial theorists like Franz Fanon approved of in his The Wretched of the Earth because he believed it has a positive psychological impact on the oppressed.

Selective reporting on the atrocities of the other side always emboldens a sense of righteousness, even as our counter-violence assumes the form of less visible and far more deadly “shock and awe-ful” airpower or the use of weapons with nuclear materials like depleted uranium. Throughout the Iraq War, there have been few reports on U.S. war crimes in the U.S. controlled media with its history of loyal embeds and patriotic correctness.

No one in the U.S. mainstream media has reminded us of the U.S. torturers of Abu Ghraib prison or the counter-terror campaigns that the U.S. waged against towns like Fallujah and the people we demonized as “bad guys.” It may also be time to revisit our own baggage by going deeper into our own history, including the history of the U.S. invasions of the Philippines, Haiti and Vietnam.

Pick up a copy of the latest edition of the New York Review of Books to read about the unspeakable crimes that Americans imposed on each other during the Civil War, supposedly the war for freedom against slavery. Civil War expert James M. McPherson tells us about professional historian Michael C.C. Adam’s new book, Living Hell: The Dark Side of the Civil War. It is an American story of gore, not glory, in which black soldiers who surrendered were slaughtered and POWs on both sides perished in unspeakably horrific prison camps.

“The guerilla warfare that wracked parts of the South and the border states,” notes McPherson, “was especially vicious, sometimes featuring the burning alive of enemy civilians thrown into flaming buildings as well as random torturing and killing accompanied by grisly trophies including ears, genitals, scalps.” Rape and plunder was pervasive, justified as the “spoils” of war. (Adams wrote an earlier book with similar evidence in a dissection of the myth of World War II, The Best War Ever: America and World War II.)

The point here is not to rationalize ISIS’ brutality, but to take the luster off U.S. hypocrisy, to make the old point about who is calling the kettle black? In our faith in American “exceptionalism,” recently re-enunciated by President Barack Obama, most of our media and educators ignore crimes committed but rarely acknowledged in our name.

Our failure to demand or take part in a truth and reconciliation process in Iraq not only makes us culpable, but assured the spectacle that we are seeing. In fact, according to journalist Dahr Jamail, U.S. policymakers systematically pursued divide and conquer policies reinforcing a Sunni/Shia divide.

To complain now that President Nouri al-Maliki is not representative of all Iraqi communities is a disgrace, especially after President Obama and his predecessor hailed our great victory in Iraq. Makiki was pushed into prominence by a former U.S. ambassador. Saddam Hussein and his era suddenly look far better than the legacy of our war for “Iraqi Freedom.”

Who helped create and fund ISIS? Is Sen. Rand Paul correct in suggesting the U.S. played a role? What role was played by our “allies,” the Kuwaitis, Saudis and Qataris? Shouldn’t the media try to find out? Why are ordinary Iraqis telling reporters that they prefer ISIS to the brutal Iraqi Army, even welcoming them in some areas as liberators.

When did “we” know about ISIS attack plans? According the Telegraph in London as relayed by VICE news: “Kurdish sources tipped off US and UK intelligence agencies about ISIS plans five months ago. Apparently, a plan to seize northern Iraqi cities and move on Baghdad had been in the works for months. The Telegraph quotes a senior Kurdish intelligence official as saying ‘We had this information then, and we passed it on to your [British] government and the US government. We used our official liaisons. We knew exactly what strategy they were going to use, we knew the military planners. It fell on deaf ears.’”

Why are ISIS people saying they welcome U.S. air strikes because they will once again demonstrate Washington’s complicity with the hated Maliki dictatorship? (Their forces are apparently well dispersed to neutralize the effectiveness of targeted bombing.)

Does anyone remember the U.S. media hype around “democratic elections” in Iraq with all those voters with purple inked fingers waving them aloft for the cameras? Were those elections free and fair? Apparently not! Those fraudulent exercises only postponed the inevitable counter-push that may not prevail but will leave Iraq even more devastated, if not dismembered.”

Bear in mind that the term “barbarian” is commonly used to refer to the “uncivilized.” It is always a reference to “the others,” the never-quite humans whom we demonize and stereotype before seeking to kill.

And now, the Iranians are said to be moving militarily to support Shia groups using drones they built on our designs and shipping weapons to the border so this conflict promises to escalate into a regional war.

Significantly, at the same time, the organizers of a film festival in Iran are calling attention to an anniversary: the shooting down of the (civilian) Iran Air flight 655 by the U.S. Navy’s guided missile cruiser USS Vincennes on July 3, 1988. The U.S. never apologized for the incident and the ship’s commanders received commendation medals for their service.

Once you see these posters, you realize how the past is never past and how hatred for past crimes in the absence of accountability for the war criminals and justice for their victims easily turns into fuel for future crimes.

News Dissector Danny Schechter blogs at Newsdissector.net and works on Mediachannel.org.  He has directed a film and written two books on media complicity in the Iraq War. Comments to dissector at mediachannel.org.

8 comments for “Reaping the Seeds of Iraqi Hatred”