It is often forgotten that the path to the Great American Middle Class was forged in large part by labor activists and social reformers during the first six decades of the last century, a struggle that left behind a proud culture of music and stories that can inspire the present, as Richard L. Fricker recalls.

May is graduation month, the start of the summer season, the time when youth pack off for travels in search of a broader worldly perspective. May is also workers’ month, a celebration of those who have struggled to raise the respect for those who labor and thus to tie together those slender threads of human decency in what we call civilization. 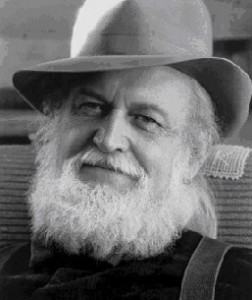 Phillips was born Bruce Duncan Phillips in Cleveland, Ohio, to Edwin D. Phillips and Frances Kathleen Coates, both active labor organizers. Their activities and his step-father’s management of vaudeville houses contributed to his becoming an icon of American folk music and the labor movement.

After an army tour in Korea during the mid-1950s, Phillips rode the rails and joined the Industrial Workers of the World (IWW), the Wobblies. During these travels, he adopted the name U. Utah Phillips in deference to singer T. Texas Tyler.

It is ironic that May 1, or May Day, is celebrated as the day of the worker in almost every corner of the industrialized world, except the United States, where it began in recognition of 1886 Chicago Haymarket Massacre during a battle for the eight-hour work day, to replace the then-standard 60 hours of work over six days a week.

On May 3, 1886, McCormick Harvesting Machine Company workers were confronted by 400 Chicago police and Pinkerton agents. At least two employees were killed in the melee. On May 4, workers gathered at Haymarket Square, where a bomb exploded. Labor activists reported four of their number dead. At least six officers died, a reported 60 wounded, though the Chicago Tribune quoted one officer saying, “A very large number of the police were wounded by each other’s revolvers.”

Seven labor activists were arrested, convicted and sentenced to death, four were hanged. Much like Oklahoma’s recent botched execution, they did not die immediately as expected. They slowly strangled to death in front of a horrified crowd.

In 1894, Congress officially designated “Labor Day” after the Pullman Strike was broken at the cost of 30 workers dead at the hands of U.S. Marshalls and the army. The actual day of celebration was moved from May 1 to the first Monday in September because of fears that commemoration of the Haymarket Affair would ignite further civil disruption.

It was from this history of the worker struggle that Phillips began to draw inspiration for his music and lyrics. At one point, he traveled to Utah where he met Ammon Hennacy of the Catholic Workers Party. He credited Hennacy with taking him off the rails and redirecting his life as a singer, writer and labor organizer.

The founder of the Catholic Worker, Dorothy Day, referred to Hennacy as, “Love in action,” according to Phillips. Together they founded the mission and hospitality home named after labor activist Joe Hill. Phillips worked at the mission for eight years while writing and performing.

Hill was born Joel Emmanuel HÃ¤gglund (Oct. 7, 1879-Nov. 19, 1915) in GÃ¤vle, Sweden, immigrating to the U.S. after his parents died. After working on the docks and labor camps on the West Coast he joined the IWW and rose in the ranks as an organizer. He wrote articles, songs and poetry for Wobblies publications under the name Joe Hill.

In 1913, Hill worked in the Silver King Mine in Park City, Utah. On Jan.10, 1914, a Salt Lake City grocer and son were killed during the robbery of their store. That same evening Hill appeared at the home of a local doctor with a gunshot wound. He claimed to have been shot during an altercation over the affections of a young lady.

Authorities claimed to link Hill to the robbery murder. He was tried, convicted and sentenced to death by firing squad. Later, historians would undercover documents supporting Hill’s innocence, but the prevailing belief at the time, and Hill wrote as much, was that he was killed more for being a Wobbly than for the murder.

Hill’s conviction and execution came during one of the most violent eras of the American labor movement. Earlier that year, National Guardsmen accompanied by private police hired by Colorado Fuel and Iron Company killed over two dozen workers, wives and children at a mining camp in Ludlow, Colorado.

At his execution officials in attendance reported that as the riflemen took up the order to “ready, aim” he shouted, “Fire, go on and fire!” His ashes were divided into 600 packets which were sent to IWW chapters around the country, except Utah.

Among Hill’s songs, which have been sung by labor organizers, folk singers, immortalized in movie soundtracks, and covered by several modern artists were: “The Preacher and the Slave” “The Tramp,” “There is Power in a Union,” “The Rebel Girl” and “Casey Jones, the Union Scab.” He also coined the phrase, “pie in the sky.”

Hill’s death did not end violence against the IWW and organized labor. For instance, in Tulsa, Oklahoma, during World War I, 12 Wobblies were convicted of not owning war bonds. And, on Nov. 7, 1917, the local police turned them and five defense witnesses over to the Knights of Liberty of the Ku Klux Klan, who took the 17 men to a remote wood where they were flogged, tarred and feathered. The incident, known as The Tulsa Outrage, foreshadowed the city’s race riot of 1921.

Utah Phillips chronicled these memories in his songs during the post-World War II labor struggles. He would sing his labor songs and then talk about the need for strong unions. He would talk and sing about his days as a Gandy Dancer, those who did the backbreaking work of straightening the rails and resetting ties on the tracks.

He told David Kupfer, writing for The Progressive magazine, that Pete Seeger “invented” the trade of going town to town performing and urging citizen action. “Pete Seeger’s gift to my life is my life,” Phillips said.

Though Phillips considered himself a pacifist, some described him more as a Christian non-violent anarchist. He knew Daniel Berrigan of the Berrigan Brothers, two Catholic priests who went to prison for their anti-war activities during the Vietnam era. Phillips said, “I don’t need money, I need friends.”

His enduring legacy includes Wobbly tunes “Hallelujah, I’m a Bum,” “The Preacher and the Slave” and “Bread and Roses.” His first album was “Good Though!” which contained “Daddy, What’s a Train?” “Queen of the Rails,” and the famous, “Moose Turd Pie.” His work has been recorded by Emmylou Harris, Ian Tyson, Tom Waits and just about every other artist who sings about and to the working class.

It is also a bitter irony that the workers struggle that Phillips and others immortalized has changed in ways they would never have imagined as globalism and technology have eliminated many of the working-class jobs that were once protected by unions. But the worker movement, disorganized as it may be, continues.

Today what the workers of Haymarket, Ludlow and Pullman struck and died for, the eight-hour day/40-hour week is still a quest, though often now it is the struggle to avoid part-time pay and temporary jobs, which prevent many workers from being fully enfranchised employees respected for their work and their talents.

Oklahoma Gov. Mary Fallin, in league with her Tea Party legislature, has made it illegal for workers to petition for a vote to raise the minimum wage. Meanwhile, corporate CEOs earning millions of dollars a year complain that to pay a worker what is acknowledged as a living wage would hinder the economy. The IWW’s struggle has never ended.

In January 2008, Phillips announced that he had elected to not have a needed heart transplant. He died that May 23 from complications of heart disease. He was 73 years of age. But somewhere on a picket line, you can still hear the echo of Utah Phillips singing “Solidarity Forever (The Union Makes Us Strong).”

These are some of the songs and words of Utah Phillips:

“Solidarity Forever” has been sung by thousands of artists; this version is by Leonard Cohen.

“There is Power In the Union”; written by Joe Hill https://www.youtube.com/watch?v=O93YpTYCWRk

“I Will Not Obey” https://www.youtube.com/watch?v=h5Ro4rTvDcw

“Rock Salt and Nails” Not everything Utah Phillips wrote was about trains, labor and unions. This is a haunting piece about a broken heart released by Steve Young in 1969.

Richard L. Fricker lives in Tulsa, Oklahoma, and is a regular contributor to The Oklahoma Observer. His latest book, The Last Day of the War, is available at https://www.createspace.com/3804081 or at www.richardfricker.com.,

7 comments for “The Proud Message of Utah Phillips”