An inconvenient truth about America’s use of capital punishment is that it puts the U.S. in company with unappealing authoritarian states, like China, Iran and Saudi Arabia, while creating a divide from modern democratic societies in Europe and the Americas, notes ex-CIA analyst Paul R. Pillar.

Recently the New York Times ran an article about capital punishment in Texas, where the execution of condemned prisoners is such a frequent and routine occurrence that it is carried out with assembly-line efficiency, in contrast to stories from some other states of botched executions.

Even many critics of the death penalty acknowledge that executions in Texas demonstrate how if you do something often enough, you tend to get pretty good at it. One Houston law professor who has represented many death row inmates says of executions, “I think Texas does it as well as Iran.” 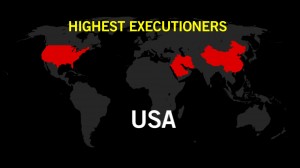 Amnesty International’s graphic showing the countries that extensively use the death penalty.

The comparison with Iran points to a pattern in the use of capital punishment of which most Americans are probably unaware. Only about a fifth of the world’s nations regularly carry out executions. Some other countries have not formally abolished the death penalty but have executed no prisoners for at least a decade. A few others reserve the right to use it only in exceptional circumstances such as time of war.

The United States is distinctly in a minority in regularly using death as a criminal punishment. Even more striking is the pattern of who is and is not in that minority. Capital punishment has been abolished in all of Europe except for Belarus. It is not used anywhere in the Americas except for the United States.

Among advanced democracies, the only other G-8 country that uses it is Japan, and its use has been far more sparing than that of the United States. U.S.-European differences over the death penalty, and some strong European feelings about the issue, have at times been a practical impediment to cooperation on matters such as the extradition of accused terrorists.

Except for the United States, regular use of capital punishment is confined to a swath of Asia, the Middle East, and northeast Africa. By far the most prodigious user of it in recent years has been China. Next comes Iran, and then Iraq and Saudi Arabia. The United States rounds out the top five, with Yemen not far behind it. Some company.

Reasonable arguments have long been made both for and against the death penalty, and some of those arguments refer to empirical questions such as the extent to which capital punishment does or does not deter other would-be criminals. That there are arguments on both sides is reflected in divisions in opinion among Americans, with about 60 percent favoring the death penalty for convicted murderers and 35 percent opposed; those numbers have varied, up and down, considerably over the past several decades.

There also is a regional division in attitudes; Texas accounts for nearly 40 percent of all executions in the United States. Setting aside arguments about deterrence and the like, however, whether government is authorized to put any of its own citizens to death can surely be said to say something about a nation’s values.

The patterns of international use of capital punishment similarly say something about the extent to which American values are or are not shared with others, and with particular others. This topic goes beyond just capital punishment to other aspects of national values.

If a comprehensive inventory could somehow be done of shared values, going beyond ones reflected in convenient metrics such as number of executions, and examining actions and not just ideologies, the result probably would show that Americans do not share as much as we think we do with those countries with whom we routinely believe we have many common values, such as other advanced Western democracies, and that we share more than we think we do with countries we routinely believe are far different from ourselves, such as Iran.