Oklahoma’s ghoulish killing of convicted murderer Clayton Lockett on April 29 has brought new attention to America’s continued use of the death penalty, a politically popular issue in some states but a practice that has many reasons justifying its abolition, writes Marjorie Cohn.

The recent torturous execution of Clayton Lockett in Oklahoma has propelled the death penalty into the national discourse. The secret three-drug cocktail prison authorities administered to Lockett the first to render him unconscious, the second to paralyze him, and the third to stop his heart and kill him – didn’t work as planned. After writhing in pain for 43 minutes, he finally died of a heart attack.

Madeline Cohen, a lawyer who witnessed the botched execution, said Lockett had been “tortured to death.” Seasoned reporters, also witnesses, called it “horrific.” President Barack Obama found it “deeply disturbing” and promised a review of how the death penalty is administered. 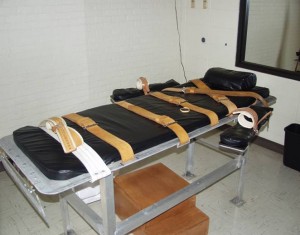 But the issue is not simply the most “painless,” fair, and efficient method the 32 death penalty states should use to put someone to death. It is not just a problem of executing innocent people, or the dubious constitutionality of the death penalty, or racism in its application and imposition, or that the death penalty does not deter homicide, or the higher cost of keeping someone on Death Row, or that nearly all industrialized countries have abolished capital punishment. The premeditated killing of a human being by the state is just plain wrong and the United States should abolish it.A week after Lockett’s execution, the Constitution Project released its report after one of the most comprehensive examinations of capital punishment in the United States. Calling the administration of the death penalty “deeply flawed,” the report focused on procedural deficiencies.

It recommended that death penalty states should use one drug instead of three to kill their citizens. It called for fewer constraints on post-conviction review of exonerating evidence, and videotaping of interrogations to identify false confessions, concluding that over 80 percent of 125 documented false confessions occurred in homicide cases; 20 percent of the defendants in those cases were sentenced to death. It recommended the abolition of the death penalty for “felony murder,” in which a person participates in, but does not commit, the homicidal act.

It expressed concern about inconsistent application of the ultimate penalty since the Supreme Court ruled in 2002 that intellectually disabled individuals should not be executed. It criticized states such as Texas, Alabama and Pennsylvania for compensating capital defense lawyers so poorly that it is “nearly impossible” to receive a proper defense. And it urged death penalty states to determine whether there are racial disparities in the application of the death penalty. The bipartisan panel did not, however, recommend abolition of capital punishment.

A new study just released by the Proceedings of the National Academy of Sciences determined that 1 in every 25, or 4.1 percent, of people on death row, are innocent. But the innocence rate is 4.1 percent, more than twice the rate of exoneration. That means an unknown number of innocent people have been put to death.

“Every time we have an execution, there is a risk of executing an innocent. The risk may be small, but it’s unacceptable,” said Richard Dieter, executive director of the Death Penalty Information Center.

In 1972, in Furman v. Georgia, the high court imposed a moratorium on the death penalty because it was arbitrarily imposed. Justice Potter Stewart wrote for the majority that executions were “so wantonly and so freakishly imposed” that they are “cruel and unusual in the same way that being struck by lightning is cruel and unusual.” But Stewart was only opposed to capital punishment as a matter of policy.

Marshall noted in his concurrence in Furman, “Perhaps the most important principle in analyzing ‘cruel and unusual’ punishment questions is [that] . . . the cruel and unusual language ‘must draw its meaning from the evolving standards of decency that mark the progress of a maturing society’ . . . Assuming knowledge of all the facts presently available regarding capital punishment, the average citizen would, in my opinion, find it shocking to his conscience and sense of justice. For this reason alone, capital punishment cannot stand.”

Brennan also concurred in Furman. He wrote, “When examined by the principles applicable under the Cruel and Unusual Punishment Clause, death stands condemned as fatally offensive to human dignity. The punishment of death is therefore ‘cruel and unusual,’ and the States may no longer inflict it as a punishment for crimes. Rather than kill an arbitrary handful of criminals each year, the States will confine them in prison.”

Eighteen years after Furman, Justice Harry Blackmun came to the conclusion that the death penalty was unconstitutional. In 1994, his last year on the Court, Blackmun famously wrote, “From this day forward, I no longer shall tinker with the machinery of death.”

Most recently, in 2008, Justice John Paul Stevens decided the death penalty amounts to cruel and unusual punishment. Stevens concluded, “[T]he imposition of the death penalty represents ‘the pointless and needless extinction of life with only marginal contributions to any discernible social or public purposes. A penalty with such negligible returns to the State [is] patently excessive and cruel and unusual punishment violative of the Eighth Amendment.’” [quoting Justice Byron White’s Furman concurrence].

In his new book, Six Amendments, Stevens proposes the Eighth Amendment be changed to read, “Excessive bail shall not be required, nor excessive fines imposed, nor cruel and unusual punishments such as the death penalty inflicted.”

According to Death Penalty Focus, the race of the victim and the race of the defendant in capital cases are major determinants in who is sentenced to death in the United States. A 1990 report by the General Accounting Office found “in 82 percent of the studies [reviewed], race of the victim was found to influence the likelihood of being charged with capital murder or receiving the death penalty, i.e. those who murdered whites were more likely to be sentenced to death than those who murdered blacks.”

The Innocence Project reports that of the 316 post-conviction DNA exonerations, 198 involved African Americans.

Think Progress reports that African-American defendants convicted of killing whites are much more likely to receive a sentence of death than white defendants convicted of killing African-Americans. Since 1976, only 20 white people have been have been executed in the United States for killing a black person. But 269 black defendants were executed for killing a white person. Death sentences in Louisiana are 97 percent more likely in murder cases when the victim is white. Florida has never executed a white person for killing a black person.

Capital punishment does not deter people from committing homicide. Dartmouth University statistician John Lamperti notes “an overwhelming majority among America’s leading criminologists [have concluded that] capital punishment does not contribute to lower rates of homicide.” In fact, murder rates in non-death penalty states are lower than murder rates in states with the death penalty, according to the Death Penalty Information Center.

The alternative to the death penalty is life in prison without the possibility of parole. Judge Arthur Alarcon and Prof. Paula Mitchell concluded that the cost of the death penalty in California has totaled over $4 billion since 1978. They calculated that a gubernatorial commutation of those sentences would result in an immediate savings of $170 million per year, a savings of $5 billion over the next 20 years.

The California Commission on the Fair Administration of Justice found in 2008: “The additional cost of confining an inmate to death row, as compared to the maximum security prisons where those sentenced to life without possibility of parole ordinarily serve their sentences, is $90,000 per year per inmate.”

International treaties and customary norms forbid capital punishment. They include the International Covenant on Civil and Political Rights (ICCPR) and its Second Optional Protocol, and Protocol No. 6 to the Convention for the Protection of Human Rights and Fundamental Freedoms Concerning the Abolition of the Death Penalty.

Last year, only 22 countries not involved in military conflict carried out executions. The United Nations Human Rights Committee found the United States to be in noncompliance with its obligations under the ICCPR due to the excessive number of offenses subject to the death penalty and the number of death sentences imposed.

The Death Penalty Information Center reports that the countries that carried out the most executions in 2013 were China, Iran, Iraq, Saudi Arabia, Somalia and the United States. Does the United States really want this to be its peer group?

Years after witnessing the excesses of the French Revolution, the Marquis de Lafayette told the French Chamber of Deputies in 1830, “I shall ask for the abolition of the punishment of death until I have the infallibility of human judgment demonstrated to me.”

Indeed, as Eugene Robinson wrote in the Washington Post, “We fool ourselves if we think there is a ‘humane’ way to kill someone . . . The death penalty has no place in a civilized society . . .  [T]here is no way to impose capital punishment without betraying the moral standards that our justice system is theoretically designed to uphold. Put simply, when we murder we become murderers.”

Supreme Court Justice Arthur J. Goldberg wrote in 1976, “The deliberate institutionalized taking of human life by the state is the greatest conceivable degradation to the dignity of the human personality.”

It is high time for all of the states in this country and the federal government itself to outlaw capital punishment. There is no good reason to retain it, and compelling reasons to abolish it.

Marjorie Cohn is a professor at Thomas Jefferson School of Law, a former president of the National Lawyers Guild, and deputy secretary general of the International Association of Democratic Lawyers. Her next book, Drones and Targeted Killing: Legal, Moral and Geopolitical Issues, will be published this fall. Copyright, Truthout. Reprinted with permission.

4 comments for “Death to the Death Penalty”