Exclusive: The U.S. mainstream media portrays the Ukraine crisis as a case of Russian “imperialism,” but the reality is that Moscow has been reacting to aggressive moves by Washington to expand NATO to Russia’s border in violation of a post-Cold War pledge, writes ex-CIA analyst Ray McGovern.

Russian Foreign Minister Sergei Lavrov used Wednesday’s interview with Bloomberg News to address the overriding issue regarding the future of Ukraine, at least from Moscow’s perspective. Speaking in fluent English, he said Russia would be “categorically against” Ukraine joining NATO.

Lavrov said he welcomed the interviewer’s question regarding whether Ukraine can be part of NATO, recognizing it as a chance to shoehorn background information into the interview. It was an opportunity to explain Moscow’s position to a wide English-speaking international audience first and foremost Americans. His comments seemed partly aimed at those so malnourished on “mainstream media” that they might be learning the history of NATO enlargement for the first time. Lavrov said: 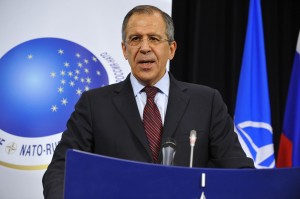 “In my view, it all started … back in the 1990s, when in spite of all the pronouncements about how the Cold War was over and that there should be no winners yet, NATO looked upon itself as a winner.”

Lavrov said U.S. and NATO reneged on a series of commitments: not to enlarge the Alliance; then (after NATO was expanded contrary to that commitment), not to deploy substantial forces on the territories of new NATO members; and then not to move NATO infrastructure to the Russian border.

“All these commitments have been, to one degree or another, violated,” said Lavrov, adding that “attempts to draw Ukraine into NATO would have a negative impact on the entire system of European security.” Lavrov said Russia’s national security interests and 25 years of recent history make this a key problem, not only for Ukraine and NATO, but also “an issue of Russia.”

Is Lavrov distorting the history? The answer is important the more so inasmuch as the information needed to form cogent judgments is rarely found in the U.S. “mainstream media.” What happened in the months immediately before and after the fall of the Berlin Wall on Nov. 9/10, 1989, is key to understanding Russia’s attitude now.

To his credit, President George H. W. Bush sent a reassuring message to the Soviets, saying, “I will not dance on the Berlin wall.” And just three weeks after it fell, Bush flew to Malta for a two-day summit with Gorbachev.

At a joint press conference on Dec. 3, 1989, Gorbachev said, “We are at the beginning of a long road to a lasting, peaceful era. The threat of force, mistrust, psychological and ideological struggle should all be things of the past.”

In the same vein, Bush spoke of a new future just begun “right here in Malta” one of lasting peace and enduring East-West cooperation. This came just six months after Bush had publicly called in a major speech in Mainz, West Germany, for “a Europe whole and free.” At the time it did not seem one had to be Pollyanna to hope that flesh could be pinned to the bones of that rhetoric.

According to Jack Matlock, then-U.S. ambassador to the U.S.S.R. who took part in the Malta summit, the most basic agreement involved (1) Gorbachev’s pledge not to use force in Eastern Europe where the Russians had 24 divisions (some 350,000 troops) in East Germany alone, and (2) Bush’s promise not to “take advantage” of a Soviet withdrawal from Eastern Europe.

In early February 1990, Bush sent Secretary of State James Baker to work out the all-important details directly with Gorbachev and Foreign Minister Eduard Shevardnadze. Ambassador Matlock again was there and took careful notes on the negotiations, which focused on German reunification.

From memory, Matlock told me that Baker tried to convince Gorbachev that it was in Moscow’s interest to let a united Germany remain in NATO. Matlock recalled that Baker began his argument saying something like, “Assuming there is no expansion of NATO jurisdiction to the East, not one inch, what would you prefer, a Germany embedded in NATO, or one that can go independently in any direction it chooses.” [emphasis added]

The implication was that Germany might just opt to acquire nuclear weapons, were it not anchored in NATO. Gorbachev answered that he took Baker’s argument seriously, and wasted little time in agreeing to the deal.

Ambassador Matlock, one of the most widely respected experts on Russia, told me “the language used was absolute, and the entire negotiation was in the framework of a general agreement that there would be no use of force by the Soviets and no ‘taking advantage’ by the U.S.”

He added, “I don’t see how anybody could view the subsequent expansion of NATO as anything but ‘taking advantage,’ particularly since, by then, the U.S.S.R. was no more and Russia was hardly a credible threat.”

In his book Superpower Illusions, Matlock wrote that NATO enlargement was a function
of U.S. domestic politics not of foreign policy strategic thinking. It seems he got that right, too.

From the campaign trail on Oct. 22, 1996, two weeks before he defeated Bob Dole for a second term as president, Bill Clinton used NATO enlargement to advertise his assertiveness in foreign policy and America’s status as the “world’s indispensable nation.” Clinton bragged about proposing NATO enlargement at his first NATO summit in 1994, saying it “should enlarge steadily, deliberately, openly.” He never explained why.

President Clinton, thus, reneged on the pledges made by Baker to Gorbachev and Shevardnadze. Clinton lamely called upon Russia to view NATO’s enlargement as an arrangement that will “advance the security of everyone.”

Clinton’s tough-guy-ism toward Russia was, in part, a response to even more aggressive NATO plans from Clinton’s Republican opponent Bob Dole, who had been calling for incorporating Poland, the Czech Republic and Hungary as full members of NATO and had accused Clinton of “dragging his feet” on this. Clinton was not about to be out-toughed.

Those three countries joined NATO in 1999, starting a trend. By April 2009, nine more countries became members, bringing the post-Cold War additions to 12 equal to the number of the original 12 NATO states.

Clinton made what quintessential Russian specialist Ambassador George Kennan called a “fateful error.” Writing in the New York Times on Feb. 5, 1997, Kennan asserted: “Expanding NATO would be the most fateful error of American policy in the entire post-cold-war era.”

“Such a decision may be expected to inflame the nationalistic, anti-Western and militaristic tendencies in Russian opinion; to have an adverse effect on the development of Russian democracy; to restore the atmosphere of the cold war to East-West relations, and to impel Russian foreign policy in directions decidedly not to our liking.”

If you are the “sole indispensable” country in the world, though, you are sorely tempted not to heed the worrywarts.

Seeds of a Crisis

On Wednesday, Lavrov said the seeds of the current Ukraine crisis were sown in April 2008 during the NATO summit in Bucharest when NATO leaders stated in a declaration that “Georgia and Ukraine will be in NATO.”

Were Lavrov not the consummate diplomat, he might have also told his interviewer that, two months before the Bucharest summit, he had warned U.S. Ambassador to Russia William J. Burns to anticipate a strong Russian reaction to including Ukraine and Georgia in NATO. But diplomats don’t generally permit themselves an “I told you so.”

Thanks to Pvt. Chelsea (formerly Bradley) Manning and WikiLeaks, we have the text of a State Department cable dated Feb. 1, 2008, from the U.S. Embassy in Moscow bearing the unusual title:  “NYET MEANS NYET: RUSSIA’S NATO ENLARGEMENT REDLINES.”

The IMMEDIATE precedence that the cable bears shows that Ambassador Burns (now Deputy Secretary of State) was addressing a priority issue under active consideration in Washington.  Though it was six years ago, Burns interlocutor was the same Russian Foreign Minister Sergei Lavrov. Here is Burns’s introductory summary of his discussions with Lavrov:

“In Ukraine, these include fears that the issue could potentially split the country in two, leading to violence or even, some claim, civil war, which would force Russia to decide whether to intervene.”

Ambassador Burns continued: “Russia has made it clear that it would have to ‘seriously review’ its entire relationship with Ukraine and Georgia in the event of NATO inviting them to join. This could include major impacts on energy, economic, and political-military engagement, with possible repercussions throughout the region and into Central and Western Europe.”

Burns’s closing comment: “Russia’s opposition to NATO membership for Ukraine and Georgia is both emotional and based on perceived strategic concerns about the impact on Russia’s interest in the region. … While Russian opposition to the first round of NATO enlargement in the mid-1990s was strong, Russia now feels itself able to respond more forcefully to what it perceives as actions contrary to its national interests.”

We don’t know whether Secretary of State Condoleezza Rice read Burns’s prescient remarks, but Lavrov’s warning clearly fell on deaf ears. On April 3, 2008, the NATO summit in Bucharest issued a formal declaration that “NATO welcomes Ukraine’s and Georgia’s Euro-Atlantic aspirations for membership in NATO. We agreed today that these countries will become members of NATO.”

Now, with events quickly spinning out of control in Ukraine, some policymakers need to tell President Obama that there can be even bigger trouble ahead, if Russia’s national security interests are not taken into account.

Ray McGovern works with Tell the Word, a publishing arm of the ecumenical Church of the Saviour in inner-city Washington. During his 27-year career as a CIA analyst, he was chief of the Soviet Foreign Policy Branch and was posted briefly to the Soviet Union. He is co-founder of Veteran Intelligence Professionals for Sanity (VIPS).

← How Wall St. Bailed Out the Nazis
Death to the Death Penalty →

14 comments for “How NATO Jabs Russia on Ukraine”