A quarter century ago, the Pan Am 103 bombing over Lockerbie, Scotland, killed 270 people and later was pinned on a Libyan agent. In 2011, Lockerbie was used to justify a U.S.-backed war to oust Libya’s Muammar Gaddafi, but the evidence now suggests the case was a miscarriage of justice, John Ashton writes.

Dec. 21, 2013, marked the 25th anniversary of what, until 9/11, was the worst terrorist attack on U.S. civilians. A total of 270 people died when PanAm flight 103 was blown out of the sky over the small Scottish town of Lockerbie; 189 of the dead were Americans.

Officially the crime was partially solved on Jan. 31, 2001, when Libyan Abdelbaset al-Megrahi was convicted of the murders by a panel of three senior Scottish judges, sitting at a specially convened Scottish court at Kamp Zeist in The Netherlands. His co-defendant, Lamin Fhimah, was acquitted. 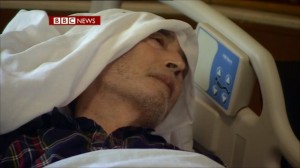 Ailing Abdelbaset al-Megrahi in September 2011, as he was dying from prostate cancer.

As Megrahi was allegedly a puppet of the Gaddafi regime the Scottish and U.S. prosecutors have vowed to pursue those who were pulling his strings. The ex-FBI Director Robert Mueller said on the 25th anniversary that he expected further charges to be brought. Yet, to most of those who have scrutinized the Megrahi conviction and Consortiumnews.com is one of the few U.S. media outlets to have done so (see here, here and here) it is, at best, odd and, at worst, a sham.

One of the UN trial observers, Professor Hans Koechler, noted: “there is not one single piece of material evidence linking the two accused to the crime. In such a context, the guilty verdict in regard to the first accused appears to be arbitrary, even irrational,” while eminent Scottish lawyer Ian Hamilton QC has said, “I don’t think there’s a lawyer in Scotland who now believes Mr Megrahi was justly convicted.”

More importantly, in 2007, the Scottish Criminal Cases Review Commission, a statutory body that reviews alleged miscarriages of justice, referred the conviction back to the appeals court on no fewer than six grounds, one of which was that the trial court’s judgment was unreasonable. Shockingly, four of the other grounds concerned the non-disclosure of important evidence by the prosecution. Sadly, Megrahi succumbed to pressure to abandon the appeal, shortly before his release from prison on compassionate grounds in August 2009.

Another reason to doubt the official line that the bombing was a solely Libyan operation is that there is ample circumstantial evidence that it was commissioned by Iran (possibly in retaliation for the U.S. military shoot-down of an Iranian airliner on July 3, 1988, killing 290 people) and carried out by a radical Palestinian group, the Popular Front for the Liberation of Palestine General Command (PFLP-GC).

Two months before the Pan Am 103 attack, on Oct. 26, 1988, the group was caught red-handed by the German federal police with a barometric bomb designed to explode at altitude. The police also uncovered a huge terrorist arsenal, which the group had amassed in an apartment in Frankfurt, the city from which PA103’s feeder flight, PA103A, would originate. Like the Lockerbie bomb, the barometric bomb had been built into a Toshiba radio cassette player. Although it was a single-speaker model the Lockerbie device had twin speakers by a rather sick twist, both models were from Toshiba’s BomBeat range.

The man who made the German bomb, Marwan Khreesat, turned out to be a mole for both the Jordanian and German intelligence services. He told the police that he had made five bombs, only four of which were recovered. He and another PFLP-GC member, Mobdi Goben, who led the group’s Yugoslavian cell, confirmed that the organization had other bomb makers and that the Oct. 26 raids did not snare all of its German operatives.

Significantly, both men independently named a member with the nomme de guerre Abu Elias as the operation’s linchpin. His true identity remains unknown. Declassified U.S. intelligence documents stated as fact that Iran and the PFLP-GC were behind the bombing. Another, written months after the investigation had shifted decisively to Libya, said that Iranian interior minister had paid $10 million for the hit.

The increasingly rickety “Libya-did-it” line appeared to receive a much-needed boost 2 ½ years ago with the fall of the Gaddafi regime. At the start of the revolution, in early 2011, the opposition leader Mustafa Abdel Jalil, who had been Gaddafi’s justice minister, told the Swedish newspaper Expressen that he had proof that his old boss was responsible for Lockerbie. Other senior government defectors implicated the old regime in the bombing.

So, when Scotland’s prosecution service, the Crown Office, announced that it would be seeking the cooperation of the new Libyan government to gather evidence against Megrahi’s alleged co-conspirators, Lockerbie watchers were braced for some rapid developments.

Unfortunately for the Crown Office and police, in the intervening 2 ½ years, they appear to have got precisely nowhere. Last December, Libya’s new UK ambassador, Mahmud Nacua, said that his government would be happy to open all of its Lockerbie files to the police, but added that this would only happen when the government had fully established security and stability a process he believed would take at least a year. A year on, there’s no hint that the files are about to be opened.

It was not until February 2013 that the police, prosecutors and the FBI got to visit Tripoli to speak to the new government. Embarrassingly, no sooner had they left than the new deputy justice minister, Hameda al-Magery, told the Daily Telegraph that the case was closed.

The Crown Office swiftly issued a press release, which described the discussions with the Libyans as “positive” and added “it is hoped there will be further progress as a result.” That hope seems increasingly forlorn. Only last month did the Libyan government appoint prosecutors to work on the case with Scottish and U.S. investigators.

The development was hailed as a “significant step” by Scotland’s chief prosecutor, the Lord Advocate Frank Mulholland. That is one interpretation, but, when viewed as a whole, the events since Gaddafi’s fall suggest that the Libyans might be trying to put off the day when they have to admit to the Scots and FBI that the cupboard is bare: they have no evidence of the Gaddafi regime’s involvement.

Since Gaddafi’s fall, the only document about the case to surface publicly from his regime’s files is a letter from Megrahi to his relative, Gaddafi’s security chief Abdullah Sennousi, in which, according to the Wall Street Journal, he protested his innocence and blamed his plight on “the immoral British and American investigators” who “knew there was foul play and irregularities in the investigation.”

What, then, of Mustafa Abdel Jalil’s proof? When asked about it on BBC Newsnight, the best he could offer was the fact that Gaddafi’s government had paid Megrahi’s legal bills. A year later Jalil insisted in another newspaper interview that Expressen had misquoted him, adding: “All I said then is what I say right now, which is that the regime was involved in this case, evident by insisting [Megrahi] returns [to Libya] and that they spent a lot of money on him while he was in jail.”

It was preposterous to claim that the old regime’s funding of Megrahi’s legal defense, and its efforts to secure his return to Libya, was evidence of its guilt.

While the police investigation in Libya has stalled, the police and Crown Office are studiously ignoring new evidence that destroys the case against Megrahi and Libya. It concerns the most important physical evidence of the entire case, a tiny fragment of circuit board, known by its police reference number of PT/35b, which was allegedly part of the bomb’s timer.

According to the prosecution case, the fragment matched boards in timers designed and built for the Libyan intelligence service by a Swiss firm called Mebo. During preparations for Megrahi’s aborted second appeal, his legal team (with whom I worked as a researcher) discovered that the fragment could not have originated from one of the Libyan timers’ boards, because it bore a crucial metallurgical difference.

When combined with a wealth of existing anomalies concerning the fragment’s provenance, the discovery strongly suggested that it was a fake that was planted in order to implicate Libya. According to the published memoir of the head of the FBI’s Lockerbie investigation, Richard Marquise, his opposite number in the Swiss police also suspected the fragment was a plant.  The thought even occurred to Marquise and the Scottish police’s senior investigating officer, Stuart Henderson.

Why, then, have the Scottish police and Crown Office failed to approach the witnesses who can attest to the mismatch between the fragment and the Libyan timers – witnesses who include the man who made the boards used in the those timers, and two independent scientists? The obvious answer is that they want to avoid evidence that shows the official case to be built on sand.

John Ashton, who worked as a defense investigator on the Pan Am 103 case, is the author of Scotland’s Shame: Why Lockerbie Still Matters.

9 comments for “The Crumbling Lockerbie Case”