Exclusive: New Jersey Gov. Christie’s Bridge-gate scandal is a reminder that unscrupulous politicians can abuse their powers in unexpected and extraordinary ways, which underscores the need to put tight legal constraints on the NSA’s surveillance powers, writes Robert Parry.

Even those who trust President Barack Obama not to exploit the National Security Agency’s vast stockpiles of metadata to wreak havoc on some political rival or citizen should take pause at the evidence that New Jersey Gov. Chris Christie’s staff orchestrated a massive traffic jam as apparent retribution to Democratic officeholders who got in his way.

Until the evidence of this skullduggery traced back to Christie’s personal staff last week, the Republican governor was considered a favorite to win the GOP presidential nomination and was given a decent chance to win the White House in 2016. 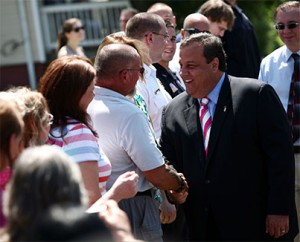 So, what if the evidence of his staff’s role hadn’t come to light and the American people had no idea how vindictive a President Christie or his staff might be? What if Mr. “I Am Not a Bully” had gotten control of the NSA’s metadata detailing how virtually every American moves through life leaving behind electronic traces of their personal routines, habits and secrets?

There was a reason why John Adams and other Founders sought a government of laws, not of men. They understood that all sorts of people were likely to achieve power during the course of a nation’s history and that while some would respect the rights of others some surely would abuse their powers.

Laws were needed to constrain how far a powerful person could go in such abuse by holding out the possibility of legal accountability. In a nation of laws, even the highest official could be brought down by engaging in some egregious misuse of power.

But the current danger is worse than the Founders could have ever imagined. The NSA’s surveillance capabilities are so far-reaching and intimidating that they could be a gateway to a terrifying land of Big Brother if someone like Chris Christie got his hands on those levers.

What would it mean for the Republic if a President Christie (or someone like him) knew all the intimate secrets of almost everyone? That is why former NSA contractor Edward Snowden referred to the NSA’s surveillance programs as “turnkey tyranny,” i.e. technology that could create a tyranny at the turn of a key.

All it would take is for one President to give the nod to his or her subordinates to direct those extraordinary powers against some troublesome politician, judge or citizen. Suddenly, that person’s life would be laid bare before the NSA bureaucrats to be examined in detail.

As former NSA analysts have said, the crunching of the metadata from phone calls, e-mails and other electronic activities could reveal marital difficulties, health problems, job troubles, questionable associations and a great deal more.

It would then be relatively easy for an unscrupulous President to have his or her henchmen wield this information in the most destructive way delivered anonymously to a suspicious spouse or a frightened boss or a hostile newspaper editor or an ambitious prosecutor. The target would likely not even know what was going on. Any suspicion that the damaging disclosures had come from on high would be ridiculed as paranoid.

If such a question were raised at, say, a news conference, a President Christie might laugh it off by joking, “Sure, I was the guy sitting in a cubicle at the NSA with earphones on!” Much like he did when he joshed about being the workman moving the cones to shut off several access lanes to the George Washington Bridge last September.

Only some persistent local journalists and determined state legislators pierced through the official denials to secure the evidence from Christie’s office, showing that his deputy chief of staff Bridget Ann Kelly had ordered Christie’s appointees on the Port Authority to create a traffic nightmare for the people of Fort Lee, New Jersey, presumably as political retaliation against some official who had crossed Christie either by refusing to endorse his reelection or over a legislative dispute.

‘Time for Some Traffic Problems’

Last summer, in the midst of Christie’s reelection campaign, Kelly sent an e-mail to top Port Authority official David Wildstein that said: “Time for some traffic problems in Fort Lee.” Wildstein responded: “Got it.” Then, starting on Sept. 9, lanes from Fort Lee onto the George Washington Bridge were shut down, supposedly as part of a traffic study. A massive traffic snarl-up ensued trapping people for hours in their cars over four days until other Port Authority officials finally interceded and ordered the lanes reopened.

After the Kelly/Wildstein e-mails were made public last week, Christie insisted that he had been “blindsided” by his staff; that they had lied to him; and that he was therefore firing Kelly and distancing himself from other implicated officials. Wildstein had resigned earlier and refused last week to testify before a New Jersey legislative panel on grounds that he might otherwise incriminate himself.

Though the behavior of Christie and his staff may be highly unusual suggesting a petty vindictiveness and a shocking insensitivity to innocent citizens Americans have seen other politicians of a similar make-up reach the Oval Office.

Christie’s “Bridge-gate” has brought up unavoidable parallels to Richard Nixon’s Watergate scandal and there are clearly some similarities. In 1972, Nixon also appeared headed toward an easy reelection victory when a team of burglars working for his campaign committee planted bugs inside the Democratic National Committee offices at the Watergate building and then returned to plant some more on June 17, 1972, when they were caught by police. [For recent disclosures from the National Archives on Nixon’s motivation, see Robert Parry’s America’s Stolen Narrative.]

Nixon and his senior aides sought to contain the investigation through the November election, mocking the affair as a “third-rate burglary” and dismissing suggestions that the break-in implicated Nixon’s staff (and surely not the President himself). It was only after Nixon’s reelection that the work of Washington Post reporters Bob Woodward and Carl Bernstein and pressure from Democrats forced out the close connections between the burglars and Nixon’s team.

In Christie’s case, the lid was kept on the bridge closings through his reelection before it finally was pried off this month. In both cases, Nixon and Christie may have believed that their landslide reelections would have protected them from accountability, given how disruptive and divisive an impeachment battle can be.

For Nixon, however, it didn’t turn out as he had hoped. Faced with impeachment in August 1974 more than two years after the break-in Nixon became the first U.S. President to resign. Christie’s fate remains up in the air pending the outcome of ongoing investigations.

But the larger point is that arrogant politicians and their staffs sometimes come to see themselves as untouchables, beyond accountability. That is why John Adams and the Founders placed such a value on laws governing the behavior of officials, not trusting officials to always do the right thing.

Snowden’s revelations about the breathtaking scope of the NSA’s surveillance powers and the new disclosures about Christie’s thuggish political operation remind us again of the Founders’ timeless wisdom and the need to place strict legal limits on the NSA’s spying.

7 comments for “If Gov. Christie Had NSA’s Metadata”