Only a month ago, Nelson Mandela’s death brought much of the world together to honor his legacy in overturning South Africa’s white supremacist regime. But the new film about his life may get short shrift as the movie-award season opens, says Danny Schechter.

The whole world recognized and paid tribute to South African icon Nelson Mandela when he died at age 95 on Dec. 5, 2013. Ninety-one heads of state attended his funeral. The UN General Assembly organized a special tribute. Mandela’s legacy is secure in official circles, and in the hearts of South Africans, but will there be recognition in the place that seems to matter to the media even more: Hollywood?

The Oscar nominations are due on Thursday, and early on, it seemed, as if “Mandela: Long Walk to Freedom,” the epic movie about the world’s most revered icon was a sure thing for Oscar consideration. Most of the big newspaper reviewers loved it and its American distributor Harvey Weinstein has specialized in influencing Academy decisions. 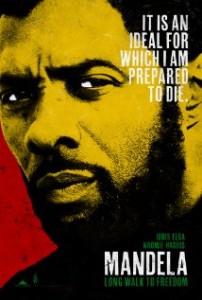 But of late, it lost its buzz and appears to be treated as an also-ran, buried by the hype machine for other movies. The entertainment media no long seems to take the movie seriously, as Oscar-worthy. All the focus is on other films and the big U.S. stars.

The producers of the movie, made in South Africa, albeit with a British director, Judson Chadwick, and Oscar-celebrated screenwriter William Nicholson, were earlier hopeful that they had a good chance of winning at least one of the statuettes that quickly translate into a place in cinema history and more bang at the box-office.

For them, however, making this film was always far more than a commercial endeavor. In my book, Madiba A to Z: The Many Faces of Nelson Mandela, producer Anant Singh shares his passion for the subject and explains that it took 16 years and as many as 50 versions of script to put together the money and the cast.

He was making it not only to honor Mandela but also tell the story of his country’s liberation. His team worked as independents with no major studio behind them.

They were also very commercial in their calculations, doing what they felt they had to do to get it made and get it out, also  conscious of deferring to Hollywood formula, by focusing on the love story between Nelson and Winnie and, in effect, depoliticizing the story of a very political figure once known for saying, “The Struggle Is My Life.”

On the Left, there was disappointment as the review in Britain’s Counterfire expressed this way: “This absence of ideological perspective is probably to be expected but the concluding effect of the film is to produce a sanitized and depoliticized Mandela that does not help us comprehend his massive impact. The apolitical Mandela in the film is the one neoliberal warmongers like Blair, Bush and Obama are happy to eulogize.”

I am sure if the filmmakers had tried to please ideologues on all sides, the movie probably wouldn’t have even been made, much less released, with the small fortune in marketing monies required to be considered competitive. That said, it did make news with lots of star-studded attention grabbing premieres and some media write-ups, especially, after Mandela died while a Royal screening was underway in England.

The movie itself got less attention than its stars and its connection with a well-known leader. Some say that’s because of the movie format, as in this review by Wamuwi Mbao in South Africa:

“The biopic genre further restricts the possible creative directions the narrative can take, and the result is a movie that tries to do a lot but ultimately does not succeed in rising above the textbook facts to give us the story of this larger-than-life man. At every point, the discerning audience member feels dissatisfied, goaded by annoying inaccuracies, and manhandled by soaring strings doing their frenetic best to convince us that this is the story as it should be told. It isn’t.”

Most of the South African reviews were positive, but this reviewer found the film not South African enough, unhappy that it was made for a global audience.

Other critics were even less enamored, putting it down as too conventional. Writes reviewer John Beifuss, “a no-show in best-of-2013 year-end critics’ polls, ‘Mandela’ is not vivid, daring or passionate enough to exploit, for better or worse, the unexpected current-events context of its arrival. It is not an adequate tribute to South Africa’s first black president nor is it a disgrace to his memory. It is a rather conventional and pious movie biography that misses the opportunity to be more to use art and imagination to bring insight to a life history that otherwise might be better served with a straight documentary.”

That was a comment that raised my eyebrows because I made six documentaries about Mandela and had been documenting the making and meaning of the movie. Dramas and documentaries can rarely be fused. Terms like “might be better served” are vague and often pretentious.

What these critics rarely do is to get specific and say what they wanted to see, or how they felt the story could have been handled differently. Perhaps that’s not their job but vague prescriptions are often a cop-out. There is often no substance in their calls for more substance.

Also, the Academy voters are hardly hostile or naive about the topic. Mandela was a big hit when he visited Los Angeles on his national trip in 1990. A reception drew every major black star in town, including many pols, liberal luminaries and sports icons such as Muhammad Ali. Mandela received the key to the city and a rally packed the old Los Angeles Coliseum. The Artists for a Free South Africa has been based in Los Angeles and kept some public attention focused on the “beloved country’s” artists and needs.

Years ago, one of my Mandela documentaries was passed over for Oscar consideration, but the Academy, out of interest I am sure, hosted a screening in L.A. under their auspices. I was pleased to be there and got lots of positive comments from the audience. That was the closest I got to the Oscar people.

So, yes, there is sympathy in Tinsel Town, but, perhaps, not much more because commerce, celebrities and movie grosses not newsy issues are always topic #1 in the industry city. Movies about the great and the good have an uphill battle in challenging Hollywood product that, this year again, seems more mesmerized by big-time crime dramas like “American Hustle” and “The Wolf of Wall Street” that make con men appear cool and groovy. Their only morality is amorality.

Those movies feature better-known stars and more made in the USA storylines, aided and abetted by even bigger and more recent advertising budgets. “Mandela: Long Walk to Freedom” didn’t have the deep pockets to compete with the blitzkrieg of new ads when the film went into “wide release” on Christmas Day. By then, it was already considered old.

The Golden Globes did give “Mandela” three nominations, one to Idris Elba, the male lead, and two for music, one to the Irish hand U2 for the hardly political upbeat end song, “Ordinary Love,” which did win the award for “best original song.”

Getting the band to the awards ceremony enhanced that show’s appeal, but everyone knows the Globes reflect the picks of many self-styled foreign correspondents, not died-in-the-wool movie industry Americanos.

The NAACP image awards also honored Elba. In Britain, the film academy nominated “Mandela” for the best British film of the year, even though it was primarily made by Videovision, a South African company. The director, screenwriter and a producer did hail from England. Curiously, the nationalism and racial identity embedded in those awards represented the very values that the real Mandela rejected.

“12 Years a Slave,” which won the Golden Globe for best drama, is the “black” movie that seems to have the best chance to win an Oscar. In that drama, a white man played by superstar Brad Pitt took action to free one African-American who had been kidnapped into slavery. There was no people’s revolt overturning an unjust system.

The movie’s major appeal may be its careful depiction of slavery and the lack of attention this historic human rights crime has received in the land of slavery. Recall black activist H. Rap Brown once observing “violence is as American as cherry pie.”

“Mandela: Long Walk to Freedom” features violence too, but oppressive state violence, more than individual bad guys whom you can hate. Apartheid may be a more recent crime than slavery but the latter is part of a U.S history that some Americans not all, for sure are ashamed of. We know more about it than what happened in faraway Africa albeit with U.S. support. (Apartheid was modeled partially on our brutal system of relocating Indians to reservations.)

Slavery as a subject is also presented only as American, while Mandela dramatizes a freedom struggle in Africa that has not been front and center much lately in a news system that routinely treats Africa as a backward continent of wars, massacres and coups.

Mandela was one of the few African leaders even reported about in the U.S. news media and the fact that his death occasioned considerable coverage may have reinforced the idea that his story has been over-exposed. Why see a movie version when the real man was on TV, etc.?

That’s a perception that certainly cut into the film’s ticket sales. If “Mandela: Long Walk to Freedom” is not on the Oscar list, it will be gone from theaters quickly, probably to return on TV movie channels and video. See it while you still can. You will be glad you did!

Danny Schechter made documentaries about the making and meaning of the movie “Mandela: Long Walk to Freedom.” He also wrote the book, Madiba AtoZ: the Many Faces of Nelson Mandela (Madibabook.com) Comments to dissector@mediachannel.org

← Condemning a Boycott of Israeli Abuses
If Gov. Christie Had NSA’s Metadata →