The death of Nelson Mandela offers Christians a chance to reflect on the great protest leader at the center of their religion, the historical Jesus, with his anger at ostentatious wealth and his disdain for social inequality, as Rev. Howard Bess reflects.

We are being reminded that Nelson Mandela was a man of protest, a protest fueled by his horror of injustice, leading him to spend many years in jail and to live one of the truly great lives of the 20th Century.

Mandela himself was a privileged man, an educated and successful lawyer. His call for justice was not as much for himself as for the millions of his black brothers and sisters who were held in economic and political bondage. 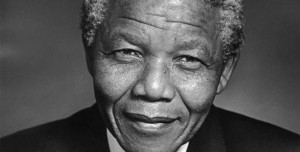 The very same description fits Martin Luther King Jr., who was college- and seminary-educated and who had earned his PhD at a prestigious university. A black Baptist minister with those credentials could have been an elite American minister recognized for his preaching skills, if he never uttered a word of protest. But King protested injustice and became the protest leader who changed America. He paid the price of assassination.

Jesus of Nazareth was the great protester of his time and he was crucified by Roman soldiers as a result. The protests of Mandela and King were very public and well documented by reporters covering the anti-apartheid and civil rights movements, respectively. Mandela and King had the advantage of living in an age of radio, television, newspapers, magazines and books. Jesus carried on his protest work with the illiterate poor of a backwater section of Palestine called Galilee.

In Jesus’s culture women were the carriers of the oral traditions of their clans. Yet, these recorders of his stories and sayings were illiterate women who listened, remembered and retold the stories (parables) and sayings (aphorisms).

Jesus did all of his teaching in Aramaic, the common language of his area. His parables and aphorisms were finally written down two generations later in Greek by literate men.

The Apostle Paul was the first writing Christian leader. He began writing 15 to 20 years after the death of Jesus, but he never mentions any of Jesus’s parables or aphorisms. Paul did not understand Jesus as a man of protest but as a theological messiah who was sent to the cross by God as a sacrifice for sin. For Paul, the cross was an altar of sacrifice rather than a Roman tool of execution.

The earliest written records of Jesus’s parables, aphorisms and other stories reflecting his concern for the poor and his opposition to injustice also were put down in Greek, but two and three generations after his death in a very different political and religious context. The Jesus, as recounted by these writers, was a theological Jesus, too, a man with a miraculous birth whose life on Earth ended with his resurrection from the dead. But their inclusion of his sermons and other teachings left behind clues of the historical Jesus.

For 2,000 years, with few exceptions, Christian churches have pursued the theological Jesus and have said little about his ministry of protest. Yet, with the help of persistent Bible scholarship, we are now able to consider the unadorned parables of Jesus and place them in the economic, religious and political context in which the stories were told.

When the teachings of Jesus are liberated from the theologies of Paul, Matthew, Mark, Luke and John, a very different Jesus appears on our screen, a master teacher whose primary tools were the stories that he told.

His stories were discussion starters. They were vivid and often carried a high level of exaggeration. They were colorful. Typically they were stories without a stated conclusion. They were memorable.

Whenever a parable of Jesus is read, the reader rightfully asks who might have been in his listening audiences. They were rural, illiterate Jews who lived in Galilee in incredible poverty and under the cruelties of Roman rule. The crowds that listened to Jesus were the expendables.

The unadorned parables of Jesus cover a broad range of topics. They cover worker/employer relationships, wage rates, the obscene living style of the rich, the utter poverty of working people, the arrogance of religious leaders, the wealth gap between the rich and the poor, the social segregation of the rich from the poor, and the absurdity of ritual practices demanded by the ruling hierarchy that controlled the Jerusalem temple.

Today most every Christian minister who is a seminary graduate will or should know these glaring facts about the life and teachings of Jesus. Yet people in the pews often are ignorant of the things that the minister knows about the historical Jesus. A typical minister hides safely behind moral niceties and comforting clichÃ©s.

If American ministers took the Jesus messages seriously, they would be preaching about the urgent need to increase the minimum wage to a livable wage; they would be leading a fight to empty our prisons; they would be walking picket lines for immigration reform so that immigrants would again be welcomed rather than despised; they would join the call for equal rights for all minorities including gay and lesbian Americans;  they would work for an education system that is free and open to all; and they would be urging their congregants to recruit and motivate people to vote for candidates who are committed to the common good rather than special interests.