After long claiming to welcome a robust debate on NSA surveillance, President Obama found the debate more robust and more substantive than he expected, especially after the leaks by Edward Snowden, as Danny Schechter explains.

Edward Snowden has become the year’s most visible and mysterious newsmaker. The former NSA whistleblower is in and out of the media, visible but invisible, living precariously in Russia, cast off by his country, and desperately seeking asylum and sanctuary in others. A growing number of nations have turned him down, most recently Germany and Brazil.

Luckily for him, a dedicated media team led by a clever and contentious lawyer/columnist Glenn Greenwald has been disseminating his findings, leaking them to newspapers the world over, even while he and his Brazilian boyfriend David Miranda tangle with authorities who are determined to plug the leaks but admit they don’t know what Snowden stole, or how to stop him except with threats that are growing more extreme. 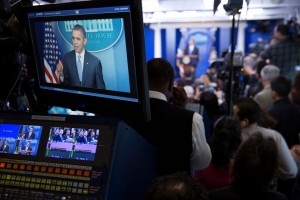 In his most recent interview with Aljazeera, Greenwald said the U.S. government is continuing to justify its growing surveillance in the name of fighting terrorism.  The U.S., he said, “uses terrorism as an excuse to do almost everything.”

Officially, the Obamatons are unchanged. The Associated Press reported: “The White House Monday renewed its demand for Edward Snowden to return home to face trial, after a top spy official floated the idea of an amnesty deal to plug his damaging intelligence leaks.”

Former State Department official John Bolton, as hawkish as they come, said he wants to see Snowden hanging from a tree.

Don’t minimize the seriousness or dismiss these threats as bluster. There are no shortages of covert mercenaries and assassins who may already be hunting him if they believe there is a bounty on his head. All it may take is a “wink and a nod.”

Snowden also has many backers.  The tech billionaire Pierre Omidyar said he will finance a new media company headed by Greenwald to the tune of $250 million. That hasn’t happened yet, but, reportedly, he has put up $50 million, a sign that Snowden and Company have serious support and some deep pockets to work with.

Now it seems that the government is getting ready to back off its sanctimonious and hard-headed defense of the NSA. Reforms are being promised even as the idea of massive spying, or in current parlance, “data mining” has been defended and expanded. Some cynics among us fear that Obama’s strident defense of the agency may be because of what they have on him!

Nevertheless, the disclosures of NSA outrages have embarrassed the Obama Administration, pissed off allies and adversaries alike, inflamed media coverage and stimulated an effort to “reform” the project. This is all happening quickly. There seems to be a trifecta of pressure, on the legal front, pressure from the hi-tech industry, and defections within the government itself.

First, U.S. District Judge Richard Leon, appointed by President George W. Bush no less, issued an opinion excoriating the constitutionality of the NSA practices. He tore into the rationale for the program with both sarcasm and legal advocacy.

Leon wrote, “I cannot imagine a more ‘indiscriminate’ and ‘arbitrary invasion’ than this systematic and high-tech collection and retention of personal data on virtually every citizen for purposes of querying and analyzing it without prior judicial approval. Surely, such a program infringes on ‘that degree of privacy’ that the Founders enshrined in the Fourth Amendment.”

Next, leading technology companies that had been outed for working with the government began to experience pushback from their own users.  Customers who had been pressed to sign bogus privacy agreements began calling and writing the companies to express displeasure.

I know I did, denouncing my AT&T telephone provider who reportedly was being reimbursed by the government for services rendered to the surveillance program. When I challenged them, I was told it was a matter of “national Security,” and they could say no more.

Like millions of others, I signed dense terms of service documents that I long ago gave up trying to read and instead just click “agree” even though I knew it was a scam. So much for informed consent.

But now, many customers are outraged that these companies were giving their private information to the spooks. As a result, many of the tech companies are pressing the government to “reform” these practices.

The Guardian reports the companies were openly dissenting at a recent meeting with President Obama. “We appreciated the opportunity to share directly with the president our principles on government surveillance and we urge him to move aggressively on reform,” they said in a statement after leaving the White House.

Obama had his own reasons to listen. As his approval ratings on the issue fell, he has begun looking for face-saving “reforms”! Suddenly, reform proposals were there, wrapped up in a 300-page document blessed by a group of no less than five intelligence “experts” and lawyers.

Reported the New York Times: “A panel of presidential advisers who reviewed the National Security Agency’s surveillance practices urged President Obama on Wednesday to end the government’s systematic collection of logs of all Americans’ phone calls, and to keep those in “private hands, “for queries and data mining” only by court order.” Boom, Boom, Boom!

Score one for Edward Snowden whose face already adorns busses in Washington D.C in a campaign accompanied by the slogan “Thank You, Edward Snowden.”  In the eyes of his boosters, he is a hero, not an information terrorist.

The major media outlets that largely denounced Snowden began to realize that their readers want more of his NSA scoops. (Greenwald has said that there are many disclosures to come).

While some media outlets are still aligned with the “intelligence community,” more and more stories about NSA outrages appear in print. The most recent on NSA overreach in Europe was reported by the Guardian, Der Spiegel, and once again, the New York Times, which had earlier turned its back on Wikileaks.

More is needed to insure that changes will occur. Higher profile challenges to the surveillance system are coming, along with more parodies and ridicule that in the end may turn the spy guys into a joke without any credibility.

Maybe it’s time to unleash actors like Will Ferrell playing Ron Burgundy and his Anchorman 2 movie “news team,” now in theaters nationwide, to get on the NSA’s case with some Dr Stangelove-like  satires ridiculing the house of paranoia headed by Director of National Intelligence James Clapper, the Strangelovian General Buck Turgidson of our times.

News Dissector Danny Schechter edits Mediachannel.org and blogs at NewsDissector.net. His latest book is Madiba AtoZ: The Many Faces of Nelson Mandela (Http://madibabook.com)