Exclusive: Saudi Arabia and Israel see Iran as their worst enemy, but that obsession is allowing al-Qaeda to reassert itself in the Middle East, especially in war-torn Syria, and that could open the West to a new round of terrorist attacks, writes Robert Parry.

The Saudi-Israeli alliance has made hostility toward Iran a higher priority than neutralizing al-Qaeda and other Sunni extremist groups, causing friction with the Obama administration and the West most apparent in the diplomatic sparks flying over negotiations on Iran’s nuclear program and the Syrian civil war.

The Saudi monarchy and Israeli Prime Minister Benjamin Netanyahu’s government view Iran as their gravest strategic threat and thus have pushed for a military option against Iran’s nuclear facilities and have favored radical Sunni rebel groups in Syria over the Iranian-backed regime of President Bashar al-Assad. 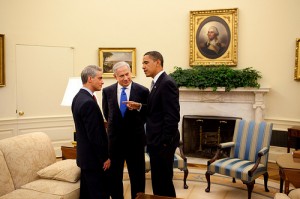 However, President Barack Obama, Russian President Vladimir Putin and some European leaders have grown increasingly alarmed that Sunni jihadists drawing their financing from Saudi Arabia and other Persian Gulf states are linking up with al-Qaeda and transforming parts of Syria into bases for terrorism.

These concerns also are putting strains on the regional collaboration between Saudi Arabia and Israel, two traditional adversaries that have only recently come together over mutual interests in seeking to shatter Iranian influence in the region and in supporting the overthrow of the Muslim Brotherhood government in Egypt.

At this point, the young Saudi-Israeli alliance appears to remain intact, with Netanyahu’s government directing most of its rhetorical fire against President Obama through its influential neoconservatives in the United States.

Prominent neocon opinion leaders have denounced Obama for engaging in Munich-style appeasement of Iran; they have portrayed him as a modern-day Neville Chamberlain. Israel’s favored members of Congress also are pushing for more draconian sanctions against Iran in a provocative move that could torpedo Obama’s diplomacy.

But these strident attacks on the Iranian nuclear agreement risk a rupture of Netanyahu’s relations not only with the Obama administration but with some European states worried that al-Qaeda affiliates in Syria could pose a renewed terrorist threat to the Continent.

Already, President Putin has expressed his anger at Saudi Arabia for what he viewed as a not-so-subtle threat from Saudi intelligence chief Prince Bandar bin Sultan to unleash Chechen terrorists against the Winter Olympics in Sochi if Russia didn’t withdraw its support for the Assad regime in Syria.

Some rank-and-file Jewish supporters of Israel also have voiced concerns about Israel’s newfound alliance with the Saudi monarchy, especially given its adherence to ultraconservative Wahhabi Islam and its embrace of a fanatical hatred of Shiite Islam, a sectarian conflict between Sunnis and Shiites that dates back 1,400 years.

So, Prime Minister Netanyahu may face a difficult choice, either advancing his new regional collaboration with the Saudis or risking the alienation of Israel’s traditional allies in Washington and European capitals.

The Saudi-Israeli alliance has surfaced most notably in the two countries’ shared position seeking the overthrow of Syrian President Assad, an Alawite, an offshoot of Shiite Islam. Assad’s regime is opposed by an increasingly extremist Sunni rebel movement drawing hundreds of jihadists from across the Muslim world, including Eastern Europe and the Chechen region of Russia.

But that did not deter Israel from siding with the Saudi-backed Syrian jihadists. In mid-September, Israel’s Ambassador to the United States Michael Oren announced that Israel would prefer to see the Saudi-backed extremists prevail over the continuation of the Iran-backed, mostly secular government of President Assad.

“The greatest danger to Israel is by the strategic arc that extends from Tehran, to Damascus to Beirut. And we saw the Assad regime as the keystone in that arc,” Oren told the Jerusalem Post in an interview. “We always wanted Bashar Assad to go, we always preferred the bad guys who weren’t backed by Iran to the bad guys who were backed by Iran.” He said this was the case even if the “bad guys” were affiliated with al-Qaeda.

Saudi Arabia shares Israeli’s strategic view that the Shiite crescent, stretching from Iran through Iraq and Syria to the Hezbollah strongholds in Lebanon, must be broken.

Further advancing the Saudi-Israeli dÃ©tente has been the emergence of the worldly Bandar as Saudi Arabia’s new intelligence chief. As the former Saudi ambassador to the United States who worked closely with the neocon administration of George W. Bush, Bandar doesn’t share the crude anti-Semitism and visceral antipathy toward Israel that many Saudi leaders did. He is a savvy player who understands the chess board of global geopolitics.

On Oct. 2, Israel’s Channel 2 TV news reported that senior Israeli security officials met with a high-level Gulf state counterpart in Jerusalem, believed to be Prince Bandar. And, a day before that TV report, Prime Minister Netanyahu hinted at the new relationship in his United Nations General Assembly speech, saying:

“The dangers of a nuclear-armed Iran and the emergence of other threats in our region have led many of our Arab neighbors to recognize, finally recognize, that Israel is not their enemy. And this affords us the opportunity to overcome the historic animosities and build new relationships, new friendships, new hopes.”

Besides the shared Saudi-Israeli animosity toward Iran, the growing behind-the-scenes collaboration also has revolved around support for the military coup in Egypt that removed President Mohamed Morsi. Both Israel and Saudi Arabia supported the Egyptian military in its bloody coup against Morsi’s elected government because of Morsi’s association with the Muslim Brotherhood, a populist Sunni movement that was seen as a threat to Israel because of the Brotherhood’s ties to Hamas and to Saudi royals because it offered a democratic alternative to Sunni authoritarianism.

So, while Saudi Arabia assured the Egyptian coup regime a steady flow of money and oil, the Israelis went to work through their lobby in Washington to insure that President Obama and Congress would not declare the coup a coup and thus trigger a cutoff of U.S. military aid.

The emerging Saudi-Israeli alliance also has reflected a recognition that the two countries have complementary “soft power” strengths that when combined could create a new superpower in the Middle East and arguably the world. While the Israelis are masters of propaganda and political lobbying (especially in the United States), Saudi Arabia can pull strings through its extraordinary access to oil and money. [For more details, see Consortiumnews.com’s “Israeli-Saudi Alliance Slips into View.”]

But Israel and its neocon backers will have to keep American politicians and the U.S. populace in line despite the darkening prospect that the Saudi-Israeli desire to inflict a body blow against Iran by overthrowing Assad is worth the risk of turning Syria into a new base for al-Qaeda terrorism.

On Wednesday, the New York Times outlined that danger in a front-page story, reporting: “Intensifying sectarian and clan violence has presented new opportunities for jihadist groups across the Middle East and raised concerns among American intelligence and counterterrorism officials that militants aligned with Al Qaeda could establish a base in Syria capable of threatening Israel and Europe.

“The concerns are based in part on messages relayed this year by Ayman al-Zawahri, Al Qaeda’s overall leader, indicating that he views Syria, where the number of jihadist rebels and foreign fighters is steadily rising, as a promising staging ground.

“But [the Obama administration’s] striking at jihadist groups in Syria would pose formidable political, military and legal obstacles, and could come at the cost of some kind of accommodation, even if only temporary or tactical, with Mr. Assad’s brutal but secular government, analysts say.

“It is not clear whether or when the White House would be willing to make such an abrupt shift in approach after years of supporting the Syrian opposition and calling for Mr. Assad’s ouster. It would certainly require delicate negotiations with Middle Eastern allies who were early and eager supporters of Syrian rebel groups, notably Saudi Arabia.

“One growing source of concern is the number of Muslims from Western countries who have gone to fight in Syria and might eventually return home and pose a terrorist threat. Analysts say at least 1,200 European Muslims have gone to Syria since the start of the war to join the fight, and dozens of Americans.”

So, the Netanyahu government faces a predicament. It can continue to expand its alliance with Saudi Arabia but in doing so it could further alienate the Obama administration and European leaders, especially if Israel’s obsession with Shiite-ruled Iran is seen as exacerbating the Sunni terrorist threat against the West.

Saudi royals have long had their fingerprints on terrorism from al-Qaeda and other jihadist groups. In the 1980s, Saudi Arabia teamed up with the Reagan administration to fund, train and arm the Afghan mujahedeen against a communist secular state in Afghanistan backed by the Soviet Union.

The anti-Soviet war in Afghanistan brought to prominence Saudi national Osama bin Laden and the Sunni terrorists who later consolidated themselves under the global brand, al-Qaeda. In the 1980s, these roving jihadists were hailed as freedom fighters and brave defenders of Islam, but in the 1990s they began targeting the United States with terrorist attacks.

Then, on Sept. 11, 2001, 19 al-Qaeda operatives 15 identified as Saudi nationals hijacked four U.S. commercial jets and used them to inflict some 3,000 deaths in New York, at the Pentagon and in a field in Pennsylvania. At the time, Bandar was the Saudi ambassador in Washington and so close to the Bush family that he was nicknamed “Bandar Bush.”

Bandar was also very close to the bin Laden family. After the 9/11 attacks, Bandar acknowledged having met Osama bin Laden in the context of bin Laden thanking Bandar for his help financing the Afghan jihad project. “I was not impressed, to be honest with you,” Bandar told CNN’s Larry King about bin Laden. “I thought he was simple and very quiet guy.”

However, immediately after 9/11, Bandar undermined the FBI’s opportunity to learn more about the connections between Osama bin Laden’s relatives and the perpetrators of 9/11 when Bandar arranged for members of the bin Laden family to flee the United States on some of the first planes allowed back into the air after only cursory interviews with the FBI.

The only part of the 9/11 Commission’s report to be blacked out as “classified” was the section dealing with alleged Saudi financing for al-Qaeda.

Thus, even as Official Washington’s neocons dutifully attack President Obama as Neville Chamberlain for negotiating an interim agreement with Iran to constrain but not eliminate its nuclear program, Prime Minister Netanyahu must decide how far he feels he can go with his new Saudi friends and just how much of a backlash he might face if he is seen as complicit in a resurgence of al-Qaeda terrorism.