The neocons are working overtime to overturn President Obama’s agreement with Iran to constrain but not eliminate its nuclear program. They are even referencing Munich in what ex-CIA analyst Paul R. Pillar says is some very bad history.

The victorious allies at the end of World War I were not entirely of one mind regarding the handling of the peace, but a strong sentiment (especially in France) was that it ought to be a tough, punitive peace.

Germany had been defeated but not crushed during the war, and most of the combat had not even taken place on its territory. It was therefore the peace, in the minds of many of the victors, that ought to be crushing, including the payment by Germany of heavy reparations. 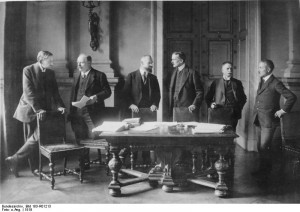 German delegates at the Versailles peace conference that brought World War I to an end but planted the seeds for World War II. (Photo credit: German Federal Archives)

Given such terms, German consent to the treaty in 1919 was, as described by the British historian A.J. P. Taylor in his classic The Origins of the Second World War, “given grudgingly and unwillingly, after long debate whether it would not be better to refuse to sign.” Germans called the Versailles treaty “a Diktat or a slave-treaty.”

The Diktat had three unfortunate and major effects in Germany. One was a determination to undermine the treaty itself. In Taylor’s words:

“The peace of Versailles lacked moral validity from the start. It had to be enforced; it did not, as it were, enforce itself. This was obviously true in regard to the Germans. No German accepted the treaty as a fair settlement between equals. … All Germans meant to shake off at any rate some part of the peace treaty as soon as it was convenient to do so.”

Another effect was a determination to assert more broadly Germany’s power and a dominant place for it in Europe, as a reaction to the treatment it was receiving at the hands of the World War I victors.

And a third effect was to boost extremist elements that expressed these resentments in their starkest and sharpest form. The harsh peace was a political bonanza for the Nazi Party, which railed against it throughout its rise to power.

Economic pressure was a key ingredient in the harsh treatment of Germany. Some of the thoughts in the allied countries about this began during the war, when an economic blockade, writes Taylor, “was believed to have contributed decisively to Germany’s defeat.” A continued blockade also “helped to push the German government into accepting the peace treaty in June 1919.” What sort of argument about a current issue does that remind you of?

The idea back then, as one hears now, is that if economic pressure helped to achieve some past success then keeping the pressure on would achieve still more success. This was part of thinking behind the reparations. But the reparations only accentuated all of the negative German responses to the peace treaty.

The reparations came to be blamed for everything going wrong in Germany in the postwar years: for poverty, for unemployment, for the hyperinflation of 1923, and for the depression of 1929. As Taylor writes, “Every touch of economic hardship stirred the Germans to shake off ‘the shackles of Versailles’.”

The strong negative sentiments came to be applied not just to the reparations themselves but to every other aspect of the peace that affected Germany. Taylor explains:

Despite the implications of all of this for present-day handling by stronger powers of relations with economically pressured weaker powers, one seldom hears references to this piece of history. Instead one hears, ad infinitum, references to a piece of history about interwar Germany that came later, after the Nazi regime was firmly established.

References to Munich and appeasement have become so commonplace and so loosely applied that they have long since debased the rhetorical currency involved and have come to constitute an insult to the victims of Nazi crimes.

More such analogizing keeps getting done with reference to the current issue of Iran and its nuclear program. The analogy is very poor. Ali Khamenei is not Adolf Hitler, and Iran has neither the ability nor the will to try to conquer the rest of its region.

Perhaps a new low of ridiculousness in such comparisons was reached the other day when the columnist Bret Stephens argued not just that there is an analogy here but that the interim agreement reached with the Iranians in Geneva is worse than what took place at Munich in 1938. As Daniel Larison at The American Conservative notes, this assertion is so absurd that probably even Stephens doesn’t really believe it.

We indeed ought to extract lessons from the momentous events in Europe between the two world wars. And we ought not just to cry “Munich” as a substitute for thinking but instead to think carefully about how those lessons apply to current calls to keep turning the economic screws on Iran and to settle for nothing less than what would amount to capitulation by Iran on the nuclear issue.

We should think about the experience with Germany when we hear, for example, Sen. Lindsey Graham, R-South Carolina, denounce the interim agreement because “we had a chance to deliver a body blow” but instead eased, to his distaste, some sanctions in return for Iranian concessions.

A “body blow,” if this means Iran capitulating on the issues rather than genuine bargaining that produces an agreement both sides consider fair, is not achievable. Even if it were, it would be a bad thing from the standpoint of U.S. interests because it would encourage the sort of effects that the post-World War I treatment of Germany encouraged in that country.

Second, it would stoke among all Iranians a desire to find ways to assert Iran’s power and influence as redemption for the humiliation it had suffered. And third, it would boost politically the extreme, hardline tendencies in Iranian politics that favor the sorts of Iranian policies that we would consider most objectionable.