Exclusive: The Israeli-Saudi détente is slowly emerging from the shadows, with a media report on a secret Jerusalem meeting and Israeli Prime Minister Netanyahu’s oblique reference in his UN speech. But this powerhouse collaboration could mean trouble for U.S. diplomacy in the Mideast, reports Robert Parry.

On Aug. 29, when I published an article entitled “The Saudi-Israeli Superpower” describing an emerging odd-couple alliance between those two traditional enemies, the story was met with skepticism in some quarters. But, increasingly, this secret alliance is going public. 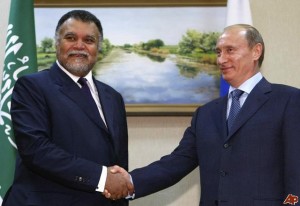 And, a day before that TV report, Israeli Prime Minister Benjamin Netanyahu hinted at the new relationship in his United Nations General Assembly speech, which was largely devoted to excoriating Iran over its nuclear program and threatening a unilateral Israeli military strike.

Amid the bellicosity, Netanyahu dropped in a largely missed clue about the evolving power relationships in the Middle East, saying: “The dangers of a nuclear-armed Iran and the emergence of other threats in our region have led many of our Arab neighbors to recognize, finally recognize, that Israel is not their enemy. And this affords us the opportunity to overcome the historic animosities and build new relationships, new friendships, new hopes.”

Besides the shared Saudi-Israeli animosity toward Iran, the growing behind-the-scenes collaboration also revolves around mutual interests in supporting the military coup in Egypt that removed the elected Muslim Brotherhood President Mohamed Morsi and in seeking to overthrow the Assad regime in Syria.

In mid-September, Israel’s Ambassador to the United States Michael Oren even embraced the Saudi strategy in Syria when he announced that Israel would prefer to see the Saudi-backed jihadists prevail in Syria over the continuation of the Iran-backed government of President Bashar al-Assad.

“The greatest danger to Israel is by the strategic arc that extends from Tehran, to Damascus to Beirut. And we saw the Assad regime as the keystone in that arc,” Oren told the Jerusalem Post in an interview. “We always wanted Bashar Assad to go, we always preferred the bad guys who weren’t backed by Iran to the bad guys who were backed by Iran.” He said this was the case even if the other “bad guys” were affiliated with al-Qaeda.

Saudi Arabia, which follows the ultraconservative Wahhabi form of Sunni Islam, shares Israeli’s strategic view that the Shiite crescent, stretching from Iran through Iraq and Syria to the Hezbollah strongholds in Lebanon, must be broken.

Further advancing the Saudi-Israeli dÃ©tente is the presence of the worldly Bandar bin Sultan as Saudi Arabia’s new intelligence chief. As the former Saudi ambassador to the United States who worked closely with the neocon administration of George W. Bush, Bandar doesn’t share the crude anti-Semitism and visceral antipathy toward Israel that some earlier Saudi leaders did. He is a savvy player who understands the chess board of global geopolitics.

The emerging Saudi-Israeli alliance also reflects a recognition that the two countries have complementary “soft power” strengths that when combined could create a new superpower in the Middle East and arguably the world. While the Israelis are masters of propaganda and political lobbying (especially in the United States), Saudi Arabia can pull strings through its extraordinary access to oil and money.

Israel and Saudi Arabia showed how their new tag-team approach worked when they supported the Egyptian military in its bloody coup against the elected Morsi government in Egypt. While Saudi Arabia assured the coup regime a steady flow of money and oil, the Israelis went to work through their lobby in Washington to insure that President Barack Obama and Congress would not declare the coup a coup and thus trigger a cutoff of U.S. military aid.

On another level, Saudi Arabia can tap into its deep well of cash to finance “irregular” forces including al-Qaeda-connected jihadists who can then be deployed to attack regional adversaries, such as Assad in Syria, or even to inflict pain on traditional superpowers.

According to a leaked diplomatic account of a July 31 meeting in Moscow, Bandar informed Russian President Vladimir Putin that Saudi Arabia has strong influence over Chechen extremists who have carried out numerous terrorist attacks against Russian targets and have recently been deployed to fight the Assad government in Syria.

Amid Bandar’s calls for Russian cooperation with the Saudi position on Syria, Bandar reportedly offered guarantees of protection from Chechen terror attacks on next year’s Winter Olympic Games hosted by Russia in the city of Sochi. “I can give you a guarantee to protect the Winter Olympics in the city of Sochi on the Black Sea next year,” Bandar reportedly said. “The Chechen groups that threaten the security of the games are controlled by us.”

According to this account, Putin responded, “We know that you have supported the Chechen terrorist groups for a decade. And that support, which you have frankly talked about just now, is completely incompatible with the common objectives of fighting global terrorism.”

Over the years, Bandar has treated the issue of “terrorism” as something of a situational ethic, using the term to disparage political movements disfavored by the Saudi royals while treating violent groups backed by Saudi Arabia as freedom fighters. That rhetorical technique has been well-honed since the days when Saudi Arabia and the Reagan administration poured billions of dollars into the Afghan mujahedeen and their Arab jihadist allies fighting Soviet troops in the 1980s.

The anti-Soviet war in Afghanistan brought to prominence Saudi national Osama bin Laden and the terrorists who later consolidated themselves under the global brand, al-Qaeda. In the 1980s, these roving jihadists were hailed as freedom fighters and brave defenders of Islam, but in the 1990s they began targeting the United States with terrorist attacks.

Then, on Sept. 11, 2001, 19 al-Qaeda operatives 15 identified as Saudi nationals hijacked four U.S. commercial jets and used them to inflict some 3,000 deaths in New York, at the Pentagon and in a field in Pennsylvania. At the time, Bandar was the Saudi ambassador in Washington and so close to the Bush family that he was nicknamed “Bandar Bush.”

Bandar was also very close to the bin Laden family. After the 9/11 attacks, Bandar acknowledged having met Osama bin Laden in the context of bin Laden thanking Bandar for his help financing the Afghan jihad project. “I was not impressed, to be honest with you,” Bandar told CNN’s Larry King about bin Laden. “I thought he was simple and very quiet guy.”

However, immediately after 9/11, Bandar undermined the FBI’s opportunity to learn more about the connections between Osama bin Laden’s relatives and the perpetrators of 9/11 when Bandar arranged for members of the bin Laden family to flee the United States on some of the first planes allowed back into the air after only cursory interviews with FBI investigators.

The only segment of the 9/11 Commission’s report to be blacked out was the part dealing with alleged Saudi financing for al-Qaeda.

Bandar’s Mafia-like threat toward the Sochi games a version of “nice Olympics you got here, it’d be a shame if something terrible happened to it” failed to intimidate Putin. Indeed, I was told that Putin’s anger fueled his decision to intervene in the Syrian crisis to head off a threatened U.S. military strike designed to “degrade” the Syrian military.

The Saudi-backed rebels had planned to mount an offensive timed with the U.S. bombing in a final drive to topple the Assad regime  and were furious when Russian diplomacy averted the U.S. attack.

As the near U.S. intervention in the Syrian civil war shows, the Israeli-Saudi alliance can be problematic to U.S. interests in the Middle East by seeking to limit peaceful options available to President Obama. In yanking Official Washington around, Saudi Arabia and Israel can work different sides of the U.S. influence-peddling street.

Saudi oil billionaires can reach into both Wall Street boardrooms and the corporate offices of Texas energy giants, while Israel has unparalleled lobbying power with Congress and can deploy its network of neocon propagandists to shape any American foreign policy debate.

Thus, the new Israeli-Saudi alliance can threaten U.S.-Russian strategies for negotiating settlements to Middle East crises. When both Israeli and Saudi leaders say no, it’s hard to fashion an effective strategy for addressing the loss of democracy in Egypt, for instance, or pursuing negotiations to resolve the crises with Syria and Iran.

The only possible counterforce strong enough to take on this new Israeli-Saudi powerhouse would be a coordinated and determined effort by the United States and Russia. Thus, the odd-couple bonding of Netanyahu and Bandar might have the ironic consequence of pushing together another odd couple, Barack and Vlad.

← Hyping the Iran ICBM ‘Threat’
The Anarchy of the Tea Party →