As a catastrophic U.S. debt default looms, Republicans keep demanding they “get something” in exchange for reopening the government and removing a gun from the head of the economy. The new talking point is that “Democrats won’t negotiate!” But ex-CIA analyst Paul R. Pillar sees an anarchic method behind the madness.

One has to struggle to find any principles or consistency in the ongoing effort at extortion that has involved shutting down government operations and threatening default on the national debt. 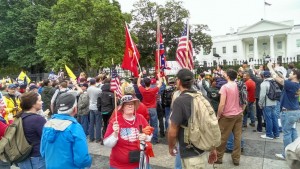 The Confederate battle flag made an appearance at a weekend Tea Party rally outside the White House. (Photo via David Frum on Twitter)

But in the interest of understanding even better what is going on, it behooves us to look for any ideational threads being followed by the extortionists, any even halfway consistent set of beliefs that shows up not only in demands being made about Obamacare or the budget but in other areas, including foreign policy.

There may be such a thread in the form of anarchism, a belief that governmental authority is per se bad and anything that helps to tear it down is good. Some critics have already affixed the label “anarchist” to the extortionists, who naturally do not like it because the word is widely taken to be pejorative.

But the labeling in this instance has validity, with regard to both methods and objectives. The method being used is anarchic in that it represents a rejection of long-established procedures for making policy in a representative democracy. The anarchic nature of the objectives is seen in the insouciance with which the perpetrators have brought to a halt functions of government that they don’t particularly like, or, more often, that they haven’t thought about enough to decide whether they should positively dislike or be indifferent to.

In searching for corresponding approaches to foreign policy, one needs to begin with the caveat that we are not talking about a single clearly defined group of protagonists. Some of those involved in the current extortion support neoconservative foreign policies; others identify more with libertarian ideas and have different preferences regarding the U.S. role overseas. But all are on the Right, and there are some places where the same common thread can be found.

Remember when John Bolton, who was made the U.S. permanent representative to the United Nations through a recess appointment after failing to win congressional confirmation for the job, said that the top ten floors could be lopped off the U.N. headquarters and no one would know the difference?

Such attitudes underlay the fervent unilateralism of the George W. Bush administration. The unilateralism was a rejection not only of the sort of institution-based order that U.N.-huggers and other liberal internationalists might like, but also of the kind of order based on balance of power that realists would favor. Again, this attitude involved comfort with international anarchy, grounded in the belief that the United States was strong enough to do whatever it wanted anyway.

Correspondence with what is going on in domestic U.S. politics today was even closer with the Bush administration’s biggest foreign policy endeavor: the Iraq War (on which libertarians parted company with the neocons). The makers of the war believed that after breaking down the existing order in Iraq, and by doing so, they hoped, breaking down the existing order elsewhere in the Middle East, whatever rose in its place had to be better.

This belief was another form of anarchist faith that tearing down governmental authority is inherently good. The belief also underlay the remarkable carelessness in failing to prepare for what would come after the toppling of the old regime in Iraq. Thomas Ricks in his book Fiasco aptly likened the attitude involved to that of the 1960s radical Jerry Rubin when he was asked what would come after the revolution. He would “groove on the rubble,” Rubin replied.

A lot of grooving on rubble is taking place now in Washington. The anarchist tendency apparent today is connected to the methods and habits of one of the energizing forces of the extortion: the Tea Party, which, as Fareed Zakaria notes, “has no organized structure, no platform, no hierarchy and no leader.”

The tactics being used in the House of Representatives represent a radical offshoot of a much more broadly evident American frame of mind that views what government does as inherently inferior to what is done outside government. Most of the other manifestations of that frame of mind are not at all anarchist, and most reflect principled thinking about such concepts as individual liberty.

But this would certainly not be the first instance of an extremist tendency branching out from what is otherwise a reasonable school of thought. One reason the anarchist tendency has been able to emerge as much as it has is that the more reasonable mainstream outlook, with its anti-government tilt, as come to be accepted uncritically as dogma without careful examination of exactly where, for example, free markets work well and where they do not.

The anarchist tendency is only one thread in the current travesty of some members of Congress threatening to harm the economy and the nation if they do not get their way. The explanations of this behavior that have nothing to do with principles still tell us most of what we need to know.

This is illustrated by the obsessive opposition to the Affordable Care Act, a law centered on free-market competition in the private sector and not at all like the kind of single-payer system that many on the Left would have preferred. A principled, and smart, opposition would have accused Democrats of stealing good ideas from Mitt Romney and the Republicans and would have urged voters, if they want to go straight to the source of good ideas and not to copy-cats, to vote Republican. But instead we have people who viscerally loathe Barack Obama and whatever he stands for and would rather destroy anything associated with him.

11 comments for “The Anarchy of the Tea Party”