The unpredictable Afghan leader Hamid Karzai has issued new demands for the U.S. to meet if it wants to keep a smaller military force in Afghanistan after 2014, creating a possible route for the U.S. to finally end its longest war, writes ex-CIA analyst Paul R. Pillar.

With attention justifiably focused on the new nuclear deal with Iran, much less public notice has been taken of steps to make America’s longest war even longer. Negotiations with a difficult Hamid Karzai over a bilateral security agreement (including a just-completed trip to Afghanistan by national security adviser Susan Rice) aim to provide a legal framework for keeping American troops in Afghanistan until 2024.

U.S. forces intervened in the Afghan civil war in 2001. If a U.S. military presence continues for the duration of a new agreement, that’s 23 years. Some soldiers who were part of the early deployments could have come home, gotten married, and had kids who will enlist and serve in the same war their parents did. The post-2014 missions are supposed to be training and counterterrorism, but amid an ongoing war, U.S. troops will be at war as long as they are there. 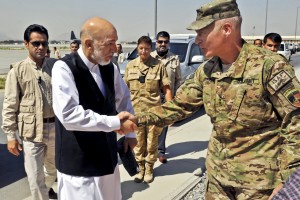 Karzai has been acting somewhat strangely lately, most recently with his refusal to sign promptly a draft agreement even though its endorsement by an Afghan loya jirga should have given him sufficient political cover to do so. The demands he has most recently been making of the United States as supposed conditions of signing sound reasonable at first glance, but upon further reflection it is hard to see exactly what the Obama administration could be expected to do in response.

One demand is for help in getting peace talks going with the Taliban. The United States is already on the right side of that one. It always could give this cause more effort and priority, but with other diplomatic tasks, especially the Iran negotiations, on the plates of the President and Secretary of State, it is probably wise that they not try to burn much more of their energy on this one.

The other demand is for release of all Afghan citizens from Guantanamo. As Karzai should know, Mr. Obama’s freedom of action to realize his goal of closing the detention facility at Guantanamo has been severely curtailed by Congress, although the Senate recently gave a glimmer of hope that this might change.

Karzai is a short-timer lame duck, and some of these negotiating problems may go away when he completes his term. But there are more fundamental problems with the American approach to Afghanistan that have to do with American politics and stale American conventional wisdom.

President Obama avoided what would have been a new political issue when he firmly and correctly refused an earlier Karzai demand to apologize for the actions of American troops in raiding Afghan homes. Against the backdrop of the imaginary “apology tour” he was alleged to have taken in his first term, it is easy to imagine the hay that his domestic political opponents would have made of any acquiescence in that demand.

But Mr. Obama is still burdened by the role that Afghanistan has played as the “good war” that has been a counterpoint to the bad war in Iraq that to his credit he opposed from the beginning. Bad war or not, his opponents criticized him for not trying hard enough to seal a deal with the Iraqi government to keep some U.S. troops there.

Against that backdrop, and with the importance of his efforts to use diplomacy to avoid what would be another very bad war, with Iran, he cannot afford to do things in Afghanistan that make him look like an isolationist wimp. And so the push for a bilateral security agreement with Afghanistan continues.

The stale conventional wisdom is what has led many Americans and American policymakers of both parties to view impoverished Afghanistan, a graveyard of empires half a globe away from the United States, as somehow so key to U.S. security that it would warrant keeping U.S. troops in a civil war there for nearly a quarter century. This attitude is another of the unfortunate aftereffects of the national trauma that was 9/11.

The attitude ignores how terrorist threats are not based primarily on possession of a piece of real estate, how the Afghan Taliban has no incentive (at least not without being under constant U.S. attack) for playing host again to al-Qaeda, how even if a piece of real estate is useful to terrorists Afghanistan is hardly the only piece available, and how the radical Sunni terrorist threat has already diffused far beyond Afghanistan.

Even if negotiations with the Taliban acquire momentum, future political arrangements in Afghanistan will depend mostly on what they always have depended on there: a lot of local deals rather than one single national one. And even if U.S. military trainers and advisers make good progress in imparting skills to Afghan troops, the loyalties of those troops will be as fragile and fungible as they always have been in Afghanistan.

The zero option for what kind of military presence the United States should have in Afghanistan after 2014 should not be regarded as just a failure of negotiations. It should be regarded as a possible outcome desirable in its own right. Karzai’s frustrating negotiating behavior might be a useful hook for helping to get us there.

6 comments for “A Possible Path Out of Afghanistan”