Exclusive: The neocons won’t give up on their agenda for more “regime change” in the Middle East, as they lash out at President Obama for daring to negotiate with Iran over its nuclear program rather than use it as an excuse for more hostilities, writes Robert Parry.

By invoking Neville Chamberlain and Neda Agha Soltan, the neocons are pulling at all available emotional strings in hopes of unraveling President Barack Obama’s interim agreement with Iran that restrains but doesn’t end its nuclear program.

In one typically over-the-top neocon column in the right-wing National Review, Daniel Pipes compared Obama and the deal on Iran’s nuclear program to Great Britain’s onetime Prime Minister Neville Chamberlain and his “peace in our time” agreement with Adolf Hitler. 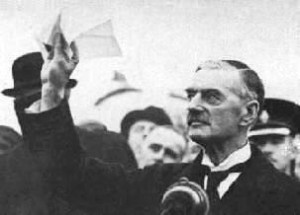 “This wretched deal offers one of those rare occasions when comparison with Neville Chamberlain in Munich in 1938 is valid,” Pipes wrote. “An overeager Western government, blind to the evil cunning of the regime it so much wants to work with, appeases it with concessions that will come back to haunt it. Geneva and November 24 will be remembered along with Munich and September 29.”

And if hysterical historical analogies don’t work for you, there is the equally misguided invocation of Neda Agha Soltan, the young Iranian woman who was killed by a bullet possibly a stray one that struck her as she was standing in traffic near violent protests against Iran’s election results in 2009.

Charles “Chuck” Lane, an editorialist for the neocon Washington Post, cited the young woman’s death as a reason for not dealing with the Iranian government, although there was never any evidence that she was intentionally killed by the government or one of its agents. At the time, there were disputed allegations that the bullet was fired by a pro-government militia member although since Soltan wasn’t even participating in the protest it always made more sense that the death was an accident.

However, in the neocons’ pursuit of another “regime change” moment in the Middle East, Lane on Tuesday rhetorically waved the young woman’s bloody shirt in a scream for revenge.

“Not that long ago, it seemed the world would never forget Neda Agha Soltan,” Lane wrote. “On June 20, 2009, a government thug fired a bullet through the 26-year-old’s heart as she stood watching protests against the blatant election fraud that had secured victory for a presidential candidate backed by Iran’s supreme leader, Ayatollah Ali Khamenei.

“Video of her dying moments went viral, and Neda became a global symbol of the Green Revolution, as the Iranian people called their movement to topple a regime capable of such bloody deeds.”

Of course, nearly everything that Lane asserted as fact was not fact. Iran’s 2009 elections were clearly won by President Mahmoud Ahmadinejad, who may have lost among middle-class voters of Tehran but strongly carried the poor and working-class areas of Iran.

Indeed, the Iranian opposition was unable to prove any significant fraud and the election results were in line with opinion polls conducted both before and after the election, from inside and outside Iran. None of the polls showed the Green movement candidate coming anywhere close to a plurality.

“These findings do not prove that there were no irregularities in the election process,” said Steven Kull, director of the University of Maryland’s Program on International Policy Attitudes. “But they do not support the belief that a majority rejected Ahmadinejad.” [See Consortiumnews.com’s “Ahmadinejad Won, Get Over It!”]

Nevertheless, the mainstream U.S. news media, led by neocon outlets like the Washington Post, promoted the myth of a stolen election, all the better to rev up American public support for another “regime change” project against one more of Israel’s adversaries.

But Charles Lane’s propagandistic sophistry has a more immediate goal at this moment. He is suggesting that the tragic but apparently accidental shooting death of a young woman in 2009 amid protests against the results of an election, which apparently did get the vote count right, should now prevent the international community from reaching an agreement with Iran on its nuclear program.

Lane wrote: “Today, Iran is once again in the headlines but not because Neda’s murderers are about to be held accountable. Nor has there been fundamental change in the regime that jailed and killed many rank-and-file members of the Green Revolution and continues to confine the movement’s leaders.

“No, we’re talking about the nuclear deal that the world’s great powers, led by the United States, signed last weekend with Khamenei’s representatives amid much smiling and backslapping. No one’s talking about Neda. Maybe we should be.”

However, the last thing that a Washington Post editorial writer should call for is accountability, since the Post’s editorial pages served as a bulletin board for the many bogus assertions about Iraq’s WMD and thus cleared the way for an aggressive and disastrous war on Iraq.

Not surprisingly, Charles Lane doesn’t do much recounting of that human catastrophe, the one that his bosses the likes of editorial-page editor Fred Hiatt and deputy editor Jackson Diehl helped inflict on the people of Iraq by cheering on Bush and his neocon warmongers.

For instance, there was the case at the start of the Iraq War when President George W. Bush mistakenly thought Iraqi dictator Saddam Hussein might be eating at a Baghdad restaurant so U.S. warplanes leveled it, killing more than a dozen civilians, including children and a young woman whose headless body was recovered by her mother.

“When the broken body of the 20-year-old woman was brought out torso first, then her head,” the Associated Press reported, “her mother started crying uncontrollably, then collapsed.” The London Independent cited this restaurant attack as one that represented “a clear breach” of the Geneva Conventions ban on bombing civilian targets.

But such civilian deaths were of little interest to the Washington Post’s editorial page and most of the mainstream U.S. media. “American talking heads … never seemed to give the issue any thought,” wrote Eric Boehlert in a report on the U.S. war coverage for Salon.com. “Certainly they did not linger on images of the hellacious human carnage left in the aftermath.”

Thousands of other civilian deaths were equally horrific. Saad Abbas, 34, was wounded in an American bombing raid, but his family sought to shield him from the greater horror. The bombing had killed his three daughters Marwa, 11; Tabarek, 8; and Safia, 5 who had been the center of his life. “It wasn’t just ordinary love,” his wife said. “He was crazy about them. It wasn’t like other fathers.” [NYT, April 14, 2003]

The horror of the war was captured, too, in the fate of 12-year-old Ali Ismaeel Abbas, who lost his two arms when a U.S. missile struck his Baghdad home. Ali’s father, his pregnant mother and his siblings were all killed. As the armless Ali was evacuated to a Kuwaiti hospital, becoming a symbol of U.S. compassion for injured Iraqi civilians, the boy said he would rather die than live without his hands.

Yes, Chuck, we could say that there was a time when it seemed the world would never forget Ali Ismaeel Abbas or the many other innocent Iraqis who died as a result of the illegal war that Bush launched and the neocons cheered on. Instead, not only have these Iraqi victims long since been forgotten (at least by the mainstream U.S. media), but the American perpetrators and their apologists have faced virtually no accountability.

And, oh, yes, if you want to talk about fraudulent elections, you might think back on how Bush got into office after losing Election 2000 to Al Gore. At the time, some of your Post colleagues praised the wisdom of the Republican majority on the U.S. Supreme Court for reversing the voters’ judgment and installing Bush in the presidency.

So, if you want to show that you’re not just a neocon hack, Chuck, you might want to write another column wondering why the Iranians would deal with the blood-drenched U.S. government. You could cite the tragic case of Ali Ismaeel Abbas (and the hundreds of thousands of other Iraqis who suffered from the U.S. invasion) as reasons why the Iranians might want to see “regime change” in Washington.

Granted, a different U.S. president is in office and he has shown a willingness to overcome the difficult history between the two countries, including the CIA-orchestrated overthrow of Iranian democracy in 1953, followed by a U.S-backed dictatorship for the next quarter century.

But, as you might have heard, there’s also a new president of Iran, Hassan Rouhani, and he’s demonstrated a readiness to bridge the chasm of distrust that has separated the United States and Iran for decades.

If Rouhani’s willing to overlook the U.S. guilt in slaughtering Ali Ismaeel Abbas’s family or decapitating the young woman in the restaurant or the countless other victims of U.S. government violence, isn’t it cynical — or even exploitative — of you to cite the death of Neda Agha Soltan as a reason for an escalated economic and possibly military war against her countrymen?

Or, Chuck, perhaps the truth is that you really don’t care about any of these deaths, including the slaying of Neda Agha Soltan. Perhaps you’re just using her while ignoring the countless others to promote a neocon agenda. That might well benefit your Post career but it will risk causing even more misery and more death.