The official investigation of JFK’s murder left many loose ends in a rush to dispel suspicions of a conspiracy, but the major U.S. news media has been even more negligent over the past half century in denouncing anyone who dares pull on those loose ends, JP Sottile writes.

Every day, people are charged with criminal conspiracy in courtrooms around the country. In those cases, a “conspiracy” merely describes a criminal act involving two or more individuals. Also every day, the establishment media reports on various criminal conspiracies, including racketeering, insider trading, political corruption, sex scandals and murder plots.

Murder plots are their favorite, particularly when a husband or wife or crazed lover hires an assassin to knock off a troublesome or inconvenient spouse for personal gain. The details and facts of those conspiracies attract a great deal of attention from journalists and news personalities who pore over police blotters, always looking for a good hook to a shocking story with “legs” and, therefore, a long life with lots of details and great ratings. 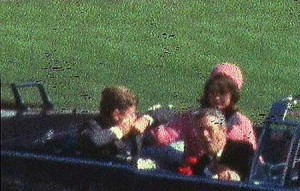 A frame from the Zapruder film capturing the first shot that struck President John F. Kennedy on Nov. 22, 1963.

Yet, over the last 50 years, the simple, descriptive word “conspiracy” has taken on a double life. On one hand, a feverish “true crime” obsession has spread around the news business, turning newsmagazine shows into banal police procedurals, and transforming entire cable broadcasts into tabloid mimics fixated upon mysteries, cover-ups and conspiracies.

The media literally spent years on the case of Chandra Levy and never stopped asking “Who killed JonBenét Ramsey?” They’ve obsessed on Amanda Knox’s convoluted story and eagerly entertained various theories about the death of Princess Diana. And they even jumped headfirst into the feeding frenzy around the murder of J.R. Ewing!

On the other hand, when faced with the crime of the 20th Century, the murder of President John F. Kennedy, those selfsame establishment mediacrats have relentlessly and effectively mutated the term “conspiracy” into a dismissive, all-purpose epithet: the “conspiracy theory.”

Instead of handling JFK’s murder like a criminal case, they’ve treated it like an urban legend. Rather than examining eyewitness accounts or reporting on the facts and notable names associated with the murder, they’ve become a pool of official stenographers. They simply ignore conspiracy facts and make offhanded remarks about conspiracy theories.

Take note that it is always the plural: “theories.” It colors every critique or suspicion of the official story with the taint of alien autopsies, Bigfoot sightings and faked moon landings. Even worse, they’ve established a blockade around experts and researchers and best-selling authors who have, over the last 50 years, uncovered reams of new information and documents relating to the case.

No, the establishment media prefers to consult with news personalities and pulp-trade historians who opine about the “myth” and “legend” and psychological “meaning” of JFK’s life and death. This is an interesting, self-serving distraction. It avoids tough questions, replacing them with predictable intonations on the tragic fall of Camelot, with epic paeans to JFK’s charisma and Jackie’s panache, and with somber reflections on a nation’s shock and awe.

And it is all punctuated with the perennial question of “What if?” “What if Jack had lived?” Alas, it is no replacement for the far more relevant question of “How did Jack die?”

Ironically, the establishment media incessantly theorizes about “what ifs” and groans about conspiracy theories while the people they accuse in absentia of being “theorists” dutifully, often heroically, gather and share conspiracy facts.

Tune into CBS or NBC or ABC or anywhere around the dial, and you do not see James DiEugenio or David Talbot or James Douglass. Instead you get Chris Matthews and Rob Lowe and, most disappointingly of all, Ken Burns. They speak like people who haven’t read. They embrace a theory they haven’t questioned. And they explain away “the people” who believe in conspiracy theories with callow psychobabble.

In spite of all their talk, they literally say nothing. There is no mention of the House Select Committee on Assassination’s determination that JFK was likely killed by a conspiracy or the invaluable book by Committee investigator Gaeton Fonzi. There is no mention of the information uncovered by the Assassination Records Review Board or that it was established because Oliver Stone did what many “journalists” and “mainline historians” refused to do. And, perhaps most significantly, completely absent is Jim Garrison’s prosecutorial dismantling of the Warren Commission.

It is as if none of it happened.

Just imagine if the blood, hair and brain tissue splattered and still preserved on Jackie’s pink dress elicited the same scrutiny and attention as did that tiresome little semen stain left on Monica’s blue dress. Perhaps then the New York Times would ask why, if Oswald shot JFK from the rear with a non-exploding bullet, the woman sitting to the left of him was so thoroughly sprayed by the fatal shot.

Alas, after leading with “Let them see what they’ve done”, Mrs. Kennedy’s famous response to the suggestion that she clean up prior to LBJ’s hasty inauguration, the Times’ story blathers on about fashion, archival ethics and, of course, “the rifle used by Lee Harvey Oswald.” The reporter never mentions, if only to dispute it, that it has been shown repeatedly that neither the rifle nor the bullet could have created those “iconic” stains in the first place.

America heard often about Bill Clinton’s crooked member. But it is strictly verboten to mention the Mannlicher-Carcano’s notoriously skewed gun-sight. Instead, the murder is treated like a moment frozen in time and consecrated by some preternatural force beyond the power of mortal men.

On “Face the Nation,” a recalcitrant and almost fanatical Bob Schieffer pronounces that Kennedy was killed by a “madman.” On “This Week with George Stephanopoulos,” Rob Lowe compares criticism of the Warren Commission with Charlie Sheen’s belief that the moon is hollow. And the New York Times’ Executive Editor Jill Abramson takes over the Sunday Book Review to declare JFK’s life and death to be “elusive” without mentioning a single book detailing the facts that are, of course, elusive to those who choose to ignore them.

In this case, the use of the word “elusive” is a stark example of psychological projection. As David Talbot points out, it is exactly what the establishment media have been over the last 50 years. They’re elusive about their bungled reporting on a sloppy criminal conspiracy of epic proportions.

It is a failure that has metastasized over the five decades since, with those entrenched behind the privileged walls of network news, major newspapers and sanitized pulp-history continually doubling-down on a discredited theory that has them perpetually out of step with the majority of Americans who, not coincidentally, also distrust them.

Perhaps it is forgivable that many reporters and editors didn’t ask questions when faced with the rapid-fire public executions of a sitting president and his accused killer. The Cold War was hot. The Cuban Missile Crisis was fresh in the minds of many. Everything seemed dangerous and tenuous. It’s even reasonable to sympathize with Chief Justice Earl Warren, who LBJ forced, practically against his will, into an untenable situation.

But that was then. And this is now. Now there is no excuse for what journalist Jefferson Morley calls “JFK denialism,” or for the establishment’s growing track record of repeated “failures” just like it, with the lead-up to the Iraq War standing out in a crowded field of errors and supposed ignorance.

Perhaps the anniversary of JFK’s death is also the anniversary of a birth, of the establishment media’s ultimate cover-story for ignorance and complicity. By dismissing “conspiracy theories” it is instantly possible to elude conspiracy facts. Ultimately, the real conspiracy may be the criminal contempt our media elites have for open inquiry and how it allows others to get away with murder.

JP Sottile is a freelance journalist, radio co-host, documentary filmmaker and former broadcast news producer in Washington, D.C. His weekly show, Inside the Headlines w/ The Newsvandal, co-hosted by James Moore, airs every Friday on KRUU-FM in Fairfield, Iowa and is available online. He blogs at Newsvandal.com.

13 comments for “JFK & the Anti-Conspiracy Conspiracy”