By all accounts, Andy Lopez was a good-hearted boy with a bright future until the 13-year-old was confronted by a police deputy who told him to drop a toy gun and then felled him with a deadly fusillade, a case that has shocked northern California, writes Dennis J Bernstein.

The Sonoma County Deputy Sheriff, who shot and killed a popular Latino eighth-grader holding a toy gun, has a history of overreaction that dates back years, according to an attorney for the slain youth’s family who has filed a federal lawsuit for wrongful death.

On Oct. 22, Deputy Sheriff Erick Gelhaus, a seasoned marksman with 24 years experience in the department, shouted to the boy, Andy Lopez, to drop the toy gun, a replica of an AK-47, and as the boy turned toward Gelhaus and his partner in a police car Gelhaus claimed to feel threatened and riddled the 13-year-old with seven bullets. 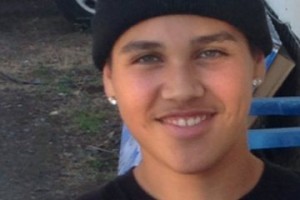 The incident occurred in broad daylight in the middle of the afternoon near Lopez’s home on the outskirts of Santa Rosa, California. Santa Rosa District Attorney, the Sheriff’s department, the Santa Rosa Police, the FBI and even the Mexican Consulate are investigating or monitoring the investigation.

Lopez family attorney Arnoldo Casillas told me in an interview that people have been coming out of the woodwork to share stories about their encounters with Gelhaus, who is also an Iraq War veteran and a commentator for S.W.A.T Magazine. Casillas said he has debriefed and taken depositions from a number of witnesses with direct knowledge of the shooting or alleged abuses by Gelhaus,

“With the media coverage and the tsunami of attention that the Lopez lawsuit has received,” said Casillas, “folks are coming to us from everywhere with stories about his repeated instances of recklessness. We are recording stories as far back to the mid-Nineties that indicate his reckless use of firearms and the shocking part about all of this is that he is the firearms expert, the instructor. In other words Gelhaus lays down the foundation as to how other sheriff deputies are going to be exercising the use of force and that is truly shocking.”

Casillas said five eyewitnesses four people in a vehicle immediately behind the patrol car and a man in front said the fatal incident began when the patrol car accelerated into the intersection and crossed into the opposing lane of traffic. The police officers screamed out a command as they were exiting the cruiser and opened fire on Lopez, possibly in a matter of only two or three seconds, Casillas said, adding:

“Our forensic evidence suggests that Andy was shot as he was turning to his right, as the officers called out to him. The first bullet hit in the chest, literally went right through his heart. And it killed him. The police officer continued to shoot as Andy fell, and as Andy was on the ground.”

According to police reports, it was 11 seconds between the time that the squad car called in to headquarters about a suspected sighting of someone carrying a gun and the fatal shooting. More crucial, in terms of the incident, was the amount of time that elapsed between the time Gelhaus called out to Lopez and opened fired.

“We do know that the important sequence, the calling out a command to the shooting, was just two to three seconds,” Casillas said. “The two women behind the patrol car said that they [the deputies] were shooting as they were getting out of the patrol car. Andy wasn’t given a chance to respond or react.”

As Gelhaus opened fire, the deputy with him, who was driving the car and who did not open fire, said the shooting was over in just a few seconds, even before he had time to move from behind the wheel and take cover behind his door.

The legal question in the aftermath of the slaying is whether Gelhaus, a master marksmen and former military trainer in Iraq, reacted rashly without giving Lopez any reasonable chance to respond to the police order and without properly assessing the actual danger of the situation from his position behind his door of the patrol car.

In any legal proceeding, Gelhaus’s record in his use of a gun as a police officer will be relevant. Lawyer Casillas said some witnesses have recounted what they consider Gelhaus’s “history of reckless and hyper-aggressive policing.”

Casillas said one troubling account of Gelhaus’s quick-draw mentality was an incident in the 1990s in which Gelhaus was called to the scene of a dispute between neighbors. After Gelhaus arrived, one of the neighbors reported that “Gelhaus literally chased her around her truck pointing a gun at her, while she was holding a 2- or 3-year-old child in her arms,” Casillas said.

Jeffery Westbrook, a program manager at an information technology company and resident of Santa Rosa, told the San Francisco Chronicle that Gelhaus pulled a gun on him twice during a routine traffic stop without provocation, just two months before the killing of Andy Lopez.

According to the report, Westbrook said “he was mistreated by Deputy Erick Gelhaus after being pulled over Aug. 21 in Cotati for failing to signal a lane change in his BMW. The interaction troubled Westbrook so much that he recalled asking Gelhaus at one point, ‘Sir, is there something wrong with you?’”

Westbrook said, “I felt like I was watching somebody I needed to help,”

According to the Chronicle’s report, Westbrook was traveling south on Highway 101 when Gelhaus stopped them and then approached the BMW from the passenger side. “There wasn’t much room on the side of the highway, Westbrook said, so he rolled down his window and offered to move the car. That’s when Gelhaus pulled a gun on him and yelled at him to turn the car off, Westbrook said. He said he responded that the car was already off.

“According to Westbrook, Gelhaus returned to his cruiser to write a ticket. Several minutes later, the driver said, Gelhaus asked him to walk back to his cruiser and then pulled a gun on him a second time, asking him if he had any weapons before frisking him.”

After the traffic incident, Westbrook contacted Gelhaus’s supervisor about concerns for the deputy’s “emotional stability.” A meeting was planned but it was canceled the day after Gelhaus killed Lopez.

One of the troubling questions raised by the Lopez shooting is whether veterans returning from the U.S. wars in Iraq and Afghanistan, where American soldiers often find themselves in dangerous situations and develop a tendency to open fire at the first hint of danger, are getting adequate counseling or screening before they begin serving as police officers patrolling U.S. streets.

Brian Brushaun, a former member of the Military Police who lives in the neighborhood where Andy Lopez was killed, just nine houses down from the field where the shooting occurred, said the deadly encounter recalled how soldiers might confront an insurgent in a war zone.

“The military are perfectly trained to kill people,” said Brushaun. “They are really good at it. We have the best killing military in the world, in my opinion. They’re also trained to capture, they are also peacekeepers. I was in during Desert One and I was in during peacekeeping and I had to draw my weapon on two suspects. I followed proper rules of engagement. I assessed the threat. I made sure stuff worked out correctly, pretty much. No one ended up needing to be shot.”

Brushaun said he worries that some combat veterans coming home and getting jobs as police officers could turn city neighborhoods into kill zones.

Gelhaus, who was put on administrative leave, is considered a seasoned weapons expert, firearms instructor, veteran trainer in the Sheriff’s Department, and a range master with extensive training in firearms.

According to his own bio, Gelhaus was an infantry non-commissioned officer in the California National Guard: “My assignments included operations assistant for a 600+ soldier unit, small arms trainer, and squad leader during a combat employment. While in Iraq, in addition to supervising a heavy weapons squad and being responsible for the soldiers and the equipment, I testified in Iraq courts during the prosecution of insurgents.”

Besides his training and other gun expertise, Gelhaus is a columnist and contributor to S.W.A.T Magazine and various other gun-culture forums that deal with the use of deadly force by police. He described his work with law enforcement as a “Contact sport.”

In a 2008 column, entitled “Ambush Reaction in the Kill Zone,” Gelhaus reflected on the need to possess the “mean gene” to survive in “the kill zone,” adding that “Today is the day you may need to kill someone to go home. If you cannot turn on the Mean Gene for yourself, who will?”

Many community members interviewed for this article are not so sure that there will be any real justice for Andy Lopez. Many are continuing to organize protests at various law enforcement agencies and hold teach-ins about the facts of the case and the need to have legal structures that hold law enforcement accountable.

Attorney Casillas said he is very concerned that local law enforcement does not appear to be doing a thorough investigation, treating the killing as just an unfortunate accident.

“What is shocking,” said Casillas, “and what everybody is worried about we’re certainly worried about it is that there investigation appears to be superficial. The witnesses who were there at the time of the shooting weren’t contacted until we brought it to the media’s attention and then media brought it to the police department. There appear to be witnesses that we have spoken to that the police department hasn’t contacted. I hate to call it a white-wash, that’s hyperbole, but you really have to question just how critically they are evaluating the situation.”