Exclusive: As the Obama administration scrambles to salvage a deal with Iran on its nuclear program, the new Saudi-Israeli alliance shows off its muscles in bending politicians and policies to its will, Robert Parry reports.

What makes the potential of the Saudi-Israeli alliance so intimidating is that Saudi Arabia and its oil-rich Arab friends have the petrodollars that can turn the heads of some leaders and even countries, while Israel can snap the whip on other politicians, especially in the U.S. Congress, through its skillful lobbying and propaganda.

We are now getting a look at exactly how this international money-and-politics game plays out as Saudi Arabia and Israel maneuver to defeat an interim agreement with Iran on freezing much of its nuclear program in exchange for some modest relief on economic sanctions. 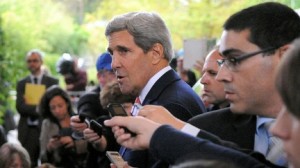 Secretary of State John Kerry addresses reporters in Geneva on Nov. 8, 2013, after arriving for what turned out to be failed talks aimed at reaching an interim agreement on Iran’s nuclear program. (Photo credit: State Department)

Saudi Arabia and its Persian Gulf neighbors lavished contracts and other financial favors on the economically hard-pressed French and lo and behold, French Foreign Minister Laurent Fabius showed up at the last minute in Geneva and blew up the nuclear deal. (Last summer, the French were in lock-step with the Saudis in their eagerness to see the U.S. military start bombing Syria, an Iranian ally.)

Granted, Fabius’s sabotage was aided by the inept diplomacy of Secretary of State John Kerry, who failed to thwart the French ploy, but the most important point in understanding the motivation behind France’s sudden activism is the old one: Follow the money.

Other lucrative arms deals are reportedly in the works between France and Saudi Arabia (and its Sunni allies). Saudi Arabia also has deployed its money to bolster France’s sagging agricultural and food sectors, including a Saudi firm buying a major stake in Groupe Doux, Europe’s largest poultry firm based in Brittany.

So, while the Saudis are showing again that money talks, the Israelis are doing their part by activating their impressive lobbying and propaganda networks inside the United States. Lawmakers in thrall to the Israelis amplified Prime Minister Benjamin Netanyahu’s talking points during a contentious Capitol Hill meeting with Secretary Kerry, his lead negotiator Wendy Sherman, and Vice President Joe Biden.

Afterwards, Sen. Chuck Schumer, D-New York, volunteered that he was “dubious” about President Barack Obama’s efforts to reach a diplomatic agreement with Iran, while some senators vowed to press ahead with plans to impose even more draconian economic sanctions on Iran, a move that Obama has warned could put the Middle East on course for another war.

Nevertheless, Sen. Mark Kirk, R-Illinois, one of Israel’s most in-its-pocket lawmakers, denounced the administration’s defense of its negotiating efforts as “fairly anti-Israel” and bragged about how he had just gotten briefed by the Israeli government, receiving information that he considered superior to what he was hearing from the U.S. government.

“I was supposed to disbelieve everything the Israelis had just told me, and I think the Israelis probably have a pretty good intelligence service,” Kirk said, while promising to do all he could to block a U.S. diplomatic rapprochement with Iran.

Buffeted by such complaints from Capitol Hill, Secretary Kerry went on MSNBC’s “Morning Joe” and stressed how warm his relationship is with “Bibi” Netanyahu.

“Bibi, the Prime Minister Netanyahu believes that you can increase the sanctions, put the pressure on even further, and that somehow that’s going to force them [the Iranians] to do what they haven’t been willing to do at any time previously. We just don’t agree with that as a but I don’t want to go into the I mean, what’s important here is we stand with Israel firmly 100 percent.”

Although the Saudi-Israeli alliance is again demonstrating its extraordinary potential to bend the policies and politicians of more powerful nations, the odd-couple alliance of the two longtime enemies is also susceptible to its own strains. For instance, I’m told that Israel was counting on some under-the-table deliveries of Saudi money, too, and that the Saudis have held back some of that financial assistance.

Netanyahu also faces resistance from some rank-and-file Jewish activists who are uncomfortable with even a subterranean alliance with the Saudi monarchy, which embraces the ultraconservative Wahhabi brand of Sunni Islam. In the past, Saudi Arabia has fielded and funded some of most radical Islamic militants including al-Qaeda leader Osama bin Laden.

It’s a hard sell especially to North American Jews who suspect that some Saudi royals have their fingerprints on Islamic terrorism, including possibly the 9/11 attacks on New York and Washington. I’m told there was a visceral reaction from some Jewish activists to recent comments made by Israeli Ambassador to the United States Michael Oren regarding Israel’s support for a possible jihadist victory in Syria.

In mid-September, Oren publicly embraced the Saudi strategy in Syria, announcing that Israel would prefer to see the Saudi-backed jihadist “bad guys” prevail in Syria over the continuation of the Iran-backed government of President Bashar al-Assad.

“The greatest danger to Israel is by the strategic arc that extends from Tehran, to Damascus to Beirut. And we saw the Assad regime as the keystone in that arc,” Oren told the Jerusalem Post in an interview. “We always wanted Bashar Assad to go, we always preferred the bad guys who weren’t backed by Iran to the bad guys who were backed by Iran.” He said this was the case even if the “bad guys” were affiliated with al-Qaeda.

The “arc” from Iran through Iraq and Syria to Lebanon is also called the “Shiite crescent,” representing a rival brand of Islam to the Sunnis, who are led by Saudi Arabia in what is seen as both a religious and geopolitical struggle for dominance in the Middle East.

The Saudis are determined to shatter the “Shiite crescent” and thus weaken the leadership of Shiite-ruled Iran. That both Israel and Saudi Arabia see their principal regional threat as Iran is at the center of their collaboration.

Yet, one source familiar with the status of the U.S.-Iran negotiations said on Friday that the strains within the Saudi-Israeli alliance may open the door for Obama to complete the interim agreement between the so-called “P-5-plus-1” the five permanent members of the United Nations Security Council plus Germany and Iran.

However, in the daunting challenges that Obama has faced in wrapping up that deal, the world is getting a look at what the future might hold if the Saudi-Israeli tandem keeps rolling forward.

[For more on this topic, see Consortiumnews.com’s “Israeli-Saudi Alliance Slips into View.”]

← Consortiumnews Turns 18, a Milestone
How France Sank the Iran-Nuke Deal →

9 comments for “The Saudi-Israeli Tag Team”