The Tea Party claims to represent average Americans but its anti-government zealotry lines up with the interests of big-business elites, such as opposition to an increased minimum wage, a plan that would help millions of average Americans, writes Lawrence S. Wittner.

Some 47 million Americans live in poverty, and a key reason is the decline of the minimum wage.

First established under the Fair Labor Standards Act of 1938, the nationwide minimum wage was designed to lift millions of American workers out of poverty and to stimulate the economy. Unfortunately, however, it was not indexed to inflation, and big businesses — hostile from the start — fought, often successfully, to prevent congressional action to raise it. 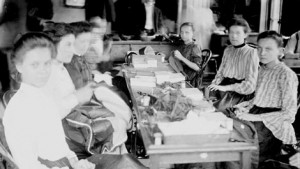 Eight girls sewing by hand on material held in their laps, during a sweatshop inspection in Chicago, Illinois.
(Photo credit: Chicago Historical Society)

At the same time, the rich have grown far richer. Between 1968 and 2012, as the minimum wage declined in value, the top 1 percent of households doubled their share of the nation’s income. The typical CEO of a big business received a 16 percent raise in 2012 — to $15.1 million. That year, the pay of Wal-Mart’s CEO, Mike Duke, rose 14 percent, to $20.7 million.

By contrast, Walmart — the largest employer in the United States — pays its sales associates an average wage of $8.81 an hour. It is much the same story at McDonald’s, which employs large numbers of the nation’s low-wage workers. In 2012, the CEO of McDonald’s was paid $27.7 million. Although his income roughly tripled in 2012, the income of McDonald’s fast food workers remained abysmal. Thanks to this pattern, the United States now has the most unequal distribution of income in the industrialized world.

Another consequence of keeping the minimum wage low is that, by under-paying workers, corporations are shifting the real costs of doing business to the general public. According to a study released this October by the University of California and the University of Illinois, 52 percent of America’s fast food workers receive assistance from public programs like food stamps, Temporary Assistance for Needy Families, and Medicaid thanks to their poverty-level wages.

As a result, taxpayers are contributing $7 billion per year to pick up the cost of supporting these fast-food workers. The study estimates that public assistance to McDonald’s workers alone amounts to $1.2 billion a year — the equivalent of one-fifth of that corporation’s annual profits. Taxpayers are also paying enormous amounts to support the impoverished employees of Walmart and other giant companies.

Many people have recognized the negative consequences of letting the minimum wage dwindle to insignificance. Twenty states and the District of Columbia have raised their minimum wages higher than the $7.25 federal rate. Congress is currently considering the Fair Minimum Wage Act that would gradually raise the minimum wage to $10.10 in three steps and then index it to the cost of living.

In addition, more than 120 cities across the United States have adopted “living wage” ordinances that require employers benefitting from publicly funded service contracts or economic development subsidies to pay wages higher than the state or federal minimums.

Taking matters into their own hands, desperate workers in low-wage establishments, such as Walmart, McDonald’s, Burger King and Wendy’s have begun staging walkouts, demanding higher wages. This August, workers protested at nearly 1,000 fast-food restaurants in more than 50 cities, demanding $15 per hour. Polls also show that the overwhelming majority of the American people support raising the minimum wage.

So why not do it? The major objection trumpeted by the corporations and their apologists is that raising the minimum wage would lead to a loss of jobs. But sophisticated studies by economists have reported little or no effect on employment of raising the minimum wage. Summarizing the studies earlier this year, Paul Krugman — the Nobel Prize-winning economist — declared: “The great preponderance of the evidence … points to little if any negative effect of minimum wage increases on employment.”

Why is this the case? One reason is that, with a higher wage, workers stay on the job longer, thus increasing labor efficiency and decreasing the cost of recruitment and retraining. Another is that two-thirds of minimum wage workers are employed by large businesses, which can easily afford higher wages (though they’d rather not pay them). Walmart, for example, had $469 billion in sales and $17 billion in profits in 2012.

Another objection is that low-wage workers are mostly teenagers, who don’t have to support a family. But people over the age of 20 constitute more than 88 percent of the 30 million American workers who would receive a raise if the federal minimum wage were increased to $10.10 an hour. These are adults — many of them married and, also, parents.

Still another objection is that, in a struggling economy, raising the minimum wage would be bad for business. But, in fact, consumer spending drives 70 percent of the economy, and those at the lower end of the economic spectrum, out of necessity, spend a larger portion of their income than do the wealthy. Therefore, raising the minimum wage would pump billions of dollars of consumer spending into the American economy. And unlike the vast government subsidies to businesses, this would be at no cost to taxpayers.

And so it makes good sense to raise the minimum wage to a level that adequately supports working Americans and their families. Until that occurs, we will live with the shameful fact that the richest nation on earth has millions of full-time employees earning poverty-level wages while giant corporations and the wealthy amass trillions of dollars at these workers’ expense.

Dr. Lawrence Wittner (http://lawrenceswittner.com) is Professor of History emeritus at SUNY/Albany and writes for PeaceVoice.  His latest book is What’s Going On at UAardvark? a satire on the corporatization of higher ed.

1 comment for “The Case for a Higher Minimum Wage”