Congressional Republicans are eager to ladle more subsidies onto agribusinesses while slashing, if not eliminating, food stamps for the poor, a twisted version of America’s own “Hunger Games,” writes Michael Winship.

Coming soon to a theater near you: famine! The second film in The Hunger Games trilogy, “Catching Fire,” opens wide on Nov. 22, based on the hugely popular novels of a post-apocalyptic world in which poverty and starvation force young people into a desperate but oh-so-glamorous, televised competition to the death.

With the movie’s release come some especially crass and bizarre product tie-ins, including the Cover Girl Hunger Games assortment of nail polishes called “Capitol Colors” (the name makes sense if you’re familiar with the books or films) and my personal favorite, the Subway Restaurants line of “Fiery Footlongs,” described on the MTV News website as “Sriracha-powered hoagies that hope to cure the hunger games happening at lunchtime in your tummy.” 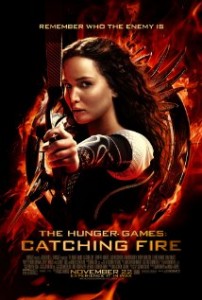 So let me get this straight: fast-food submarine sandwiches are being used to market a motion picture about people who will do anything to survive a dystopian society in which there’s nothing to eat? Yikes.

All this might be even more darkly comic if not for the fact that here in the real world, Washington is playing a Hunger Game of its own and the results are devastating. Yes, winter is coming, the holidays are on their way, and on Nov. 1, the United States government cut food stamp benefits by 13.6 percent.

To those of you who aren’t deficit hawks circling over the Potomac keeping a precise count on this sort of thing, this will constitute a Federal budget savings of $5 billion for fiscal year 2014 and another $6 billion from fiscal 2015 through 2016.

Meanwhile, this has a real and drastic impact on every one of the 48 million Americans that’s one in seven of us who receives the aid, now officially known as the Supplemental Nutrition Assistance Program, or SNAP. (The cut marks the end of extra funding that was put into the program as part of the stimulus package in 2009.)

Forget the crude stereotypes and clichÃ©s, by the way: close to half of the households receiving help from SNAP have someone working and 61 percent of the recipients are white.

The reductions have been described as “unprecedented” by the progressive Center of Budget and Policy Priorities, a loss of approximately $9 per person per month, or $36 a month for a family of four. This leaves each person affected with $1.40 less per meal, which not only stretches the food dollar past the breaking point for poor families on assistance but leads to the purchase of cheap foods filled with empty calories that do little for nutrition or overall health.

And typical of a Congress unable to think more than a step ahead, if at all, not only do we face these immediate reductions in SNAP payments but further slashing of the food assistance budget as the House and Senate try to come up with a Farm Bill acceptable to both sides. Democrats in the Senate propose additional cuts to SNAP of $4.5 billion over the next ten years while Republicans in the House seek a whopping $39 billion.

If ever there was such a gathering of the pennywise and pound foolish as this current band of representatives, I’d like to hear about it. For one thing, they fail to take into account the estimation that every dollar of SNAP assistance actually generates $1.70 in economic activity that’s money spent on food in grocery stores, bodegas and big box giants like Wal-Mart and Target that then goes toward paying their workers and suppliers and on and on.

Thus the poor may be better job creators than say, House Budget Committee Chairman Paul Ryan, who claims the program “lulls able-bodied people to lives of dependency and complacency.”

But worse may be the failure to contemplate the long-term effect of these cuts not only on poor adults but future generations. As Reid Wilson reported in The Washington Post, “SNAP benefits disproportionately help families with children. More than 21 million children — one in four children in the country today — live in households that participate in the program. More than two-thirds of the $5 billion the government saves will come from households that include children.”

A Bronx mother whose SNAP allotment has been reduced to $250 a month told The New York Times that she denies herself things she wants, like coffee and sugar, to favor her young one. “I try to get most of the things my daughter eats because I can hold the hunger I’m an adult but she cannot,” Ingrid Mott said, “They don’t understand when there’s no food in the fridge.”

As a mother, she instinctively knows, as Mariana Chilton of Children’s HealthWatch does, that when children are hungry “it has disastrous effects on their health and their cognitive, social and emotional development. SNAP not only buffers children from hunger but also helps them to grow, to be healthy, to learn, and to develop their full potential.”

Related data backs this up. A new study from the University of Denver finds that the neurological impact on children growing up in poverty increases the odds of mental health problems and perhaps even mortality. Pilyoung Kim, director of the university’s Family and Child Neuroscience Lab, told Bloomberg News, “Living in poverty at a young age can cause long-lasting changes in brain development, which contribute to difficulties in regulating of emotions and future devastating health outcomes, including mental illness and high mortality and morbidity in adulthood.”

Other recent research from the University of Georgia connected childhood poverty to compromised immune systems and, according to the progressive website ThinkProgress, “puts them at greater risk for developing conditions such as obesity, cancer, hypertension, stroke, and cardiovascular disease at a young age.”

And a 2009 report from Cornell found a connection between children raised in poverty and poor working memory. “It’s critical for learning,” Gary W. Evans, a professor of human ecology at Cornell, explained to The Washington Post. “If you don’t have good working memory, you can’t do things like hold a phone number in your head or develop a vocabulary.”

Even before the cuts, monthly food stamps for most families only last about two and a half weeks that’s according to Amalia Swan, outreach director at a food bank in Syracuse, New York. Now more than ever, many will be turning to food banks like hers for help but such programs are stretched to the limit.

The first “Hunger Games” movie sold $700 million worth of tickets worldwide, and last year, its studio, Lionsgate Entertainment, established a partnership with the United Nations’ World Food Program as well as Feeding America, the largest U.S. network of food banks. Good for them.

But here’s a thought for those companies like Cover Girl, Subway and others who stand to make money from their product tie-ins: if you’re not already doing it, donate profits to the food banks and soup kitchens around the country. Show you know that hunger is not a game.