Exclusive: Saudis and Israelis wanted to sink the negotiated deal on Iran’s nuclear program, so the French launched the diplomatic torpedo to take it down. But behind France’s action were Saudi financial muscle and Israel’s political skill, reports Robert Parry.

France’s sabotage of a compromise agreement on Iran’s nuclear program is a textbook case of how the new Saudi-Israeli alliance can disrupt President Barack Obama’s strategy for resolving Middle East disputes through diplomacy, not war.

Over the summer, Saudi officials including intelligence chief Prince Bandar bin Sultan visited European capitals dangling financial deals and energy concessions to countries if they would line up behind Saudi and Israeli desires for military intervention in the Syrian civil war and heightened economic warfare against Iran. 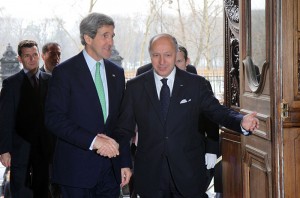 The carrots were particularly appealing to the French who are struggling with a sluggish economy, high unemployment and a recent credit downgrade. So, the flash of Saudi petro-dollars got the attention of the French government.

Other lucrative arms deals are reportedly in the works between France and Saudi Arabia (and its Sunni allies). Saudi Arabia also has deployed its money to bolster France’s sagging agricultural and food sectors, including a Saudi firm buying a major stake in Groupe Doux, Europe’s largest poultry firm based in Brittany.

The Saudis, however, had less success with other countries. In a meeting with Russian President Vladimir Putin, Bandar reportedly offered cooperation on oil and natural gas interests as the carrot for getting Putin to abandon the Syrian government of Bashar al-Assad.

But it was Bandar’s implicit stick of renewed violence by Chechen and other Saudi-backed Islamic militants that backfired. Putin reacted angrily, according to diplomatic accounts of the meeting, and adopted an even tougher stance against Saudi desires in the Middle East.

Putin also stepped up his cooperation with President Obama in searching for negotiated settlements to longstanding disagreements in the Middle East, including a U.S.-Russia-brokered deal to get the Syrian government to give up its chemical weapons, a joint push for Syrian peace talks in Geneva and a plan to resolve the Iranian nuclear dispute.

But Israeli Prime Minister Benjamin Netanyahu and the Saudi royals favor a more belligerent approach to these conflicts wanting the United States to bomb Syria and “degrade” its military, demanding the immediate removal of Syrian President Assad, and insisting on a complete capitulation by Iran under threat of crippling economic sanctions or a U.S.-Israeli aerial bombardment.

Last weekend as an interim agreement with Iran was about to be signed by the five permanent United Nations Security Council members plus Germany the French rushed to the rescue of the Israeli-Saudi alliance, showing up at the last minute to unravel the deal that had been painstakingly knitted together.

To the apparent surprise of the Obama administration, the Russians and other governments working on a compromise with Iran over its nuclear program, French Foreign Minister Laurent Fabius joined the talks late, mocked them as “a fool’s game,” and prevented the accord from being signed by adding language unacceptable to Iran.

Much of the subsequent commentary has focused on why the French were coming to the aid of the Israelis in blocking the interim agreement that Netanyahu has denounced in apocalyptic terms. But France’s interest in undercutting the deal can perhaps best be understood by factoring in the Saudi money.

Indeed, the logic behind the behind-the-scenes Saudi-Israeli alliance has been that the two former adversaries now view their interests as mostly aligning, especially their contempt for Iran’s Shiite government and its influence extending along the Shiite Crescent from Tehran through Baghdad and Damascus to Beirut.

Israel and Saudi Arabia agree that Iran is the greatest threat to their regional interests. Both countries have indicated that they want the Iranian-backed government in Syria to be overthrown even if that means it will be replaced by Saudi-backed Sunni jihadists linked to al-Qaeda. [See Consortiumnews.com’s “Israel Sides with Syrian Jihadists.”]

But what makes the Saudi-Israeli alliance so influential is the complementary strengths of the two countries. Israel has extraordinary skills at lobbying and propaganda, especially in influencing Official Washington and Capitol Hill. Saudi Arabia has vast financial resources that can turn the heads of defense officials in Paris, oil men in Houston or investment bankers on Wall Street. Together these strengths can make the negotiation of any good-faith compromise with Iran or Syria difficult, if not impossible.

Between Netanyahu pulling the strings of his political and media marionettes in Washington and the Saudis manipulating the French government and others with financial inducements, it will take toughness and savvy for the Obama administration to guide the process to a peaceful resolution. And, toughness and savvy are not attributes that the administration is known to have in great supply.

[For more on this topic, see Consortiumnews.com’s “A Showdown for War or Peace.”]

← Will NSA Reforms Protect Citizens?
US Veterans in Decline →

7 comments for “Why France Sank an Iran Nuke Deal”