The bloody assault on Egyptians protesting the ouster of democratically elected President Mohamed Morsi has the look of madness as the military pushes Islamists toward more violence but there is a sick logic if the generals see more Islamic extremism as their lock on U.S. aid, writes ex-CIA analyst Paul R. Pillar.

There were other ways of dealing with the camping-out protestors in Cairo. The Ministry of Interior had even talked about other ways, about some combination of tear gas and leaving open an exit route so the protestors could disperse. And surely it must have occurred to the Egyptian generals that the action they in the end took, just like the event in Tiananmen Square in 1989 that this week’s event so readily evokes, would leave a lasting bloodstain on their legacy. 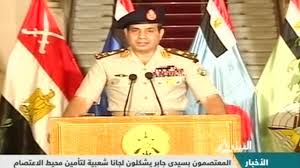 There are many plot lines and accompanying explanations that can be applied to the current mess in Egypt, but one does not have to be a Middle Eastern conspiracy aficionado to look in particular at how the Egyptian generals and their shades-of-Nasser leader, Abdul-Fattah el-Sisi, may be doing what they are doing as a way of staying within the embrace of the West and especially the United States.

One of the most prominent things they have been doing over the past couple of months is to motivate Egyptians and especially Islamists to turn to extremism and violence. First there was the slamming of the door in the face of the Muslim Brotherhood, incarcerating its leaders and making it very clear the Brotherhood would not be welcome to participate in any new and purportedly democratic political process.

Most of the Brotherhood’s supporters were not ready to abandon the peaceful ways that the organization had followed for decades, but their dismay and anger made the protests and the camps inevitable. Now there is the bloody and brutal destruction of the camps, and at least some of those supporters are surely concluding that there is no method left to them but violence.

Wouldn’t the breeding of more Egyptian terrorists be a bad thing from the viewpoint of Egyptian military leaders? Not if they wish to present themselves as a bastion against terrorism and to lay claim as such to American support. The brass may be more comfortable with this sort of claim than with one based on shepherding the introduction of true democracy, given all the uncertainties democracy is apt to pose for the highly privileged position of the Egyptian military and its officer corps.

The cultivation of more extremists and terrorists may be necessary to sustain any claim based on an Egyptian Islamist bogeyman. Mohamed Morsi’s presidency certainly was not sufficient; it did not come close to realizing the old Islamophobic scenario of one man, one vote, one time.

One of the most distinctive aspects of Morsi’s one year in office was how he was not able to take control of the organs of state even though he supposedly was the chief executive. He came nowhere close to taking control of the all-important security forces. One of the bevy of army and police generals who have just been installed as provincial governors had earlier, when Morsi was still president, been demonstrably open about his intention not to take any action when a mob was ransacking offices of the Muslim Brotherhood.

The technique of following policies that cultivate more extremists and terrorists and then laying claim to a special relationship with Washington as a bastion against extremism and terrorism is not one that the Egyptian generals necessarily thought up themselves. They could have learned it from the masters of the technique next door in Israel. They are even collaborating with Israel in practicing the technique, as punctuated the other day by an Israeli drone strike, evidently condoned by Cairo, against oppositionists in the Sinai.

If the Egyptian generals have not seemed very worried about jeopardizing their $1.5 billion in annual U.S. aid, maybe it is because they see how Israel gets twice that much, not to mention all those vetoes at the United Nations and other political cover, despite the Israelis repeatedly sticking their thumbs in American eyes. The latest thumb-sticking has been this week, with an announcement of more expansion of settlements in occupied territory just as Israeli-Palestinian peace talks are getting under way.

Secretary of State John Kerry reassures us that this was not a surprise because Prime Minister Netanyahu had been “upfront” with him about the latest settlement expansion. Evidently even thumb-sticking is acceptable if those doing it are brazenly “upfront” about it. General el-Sisi looks like he has this kind of swagger.

6 comments for “A Method to Egypt’s Madness”