Exclusive: Pvt. Bradley Manning has prostrated himself before his court-martial judge, apologizing for leaking documents on U.S. government wrongdoing and referencing his psychological problems as reasons for mercy. The sad spectacle underscores how upside-down American morality now is, says Robert Parry.

Having covered the U.S. government for nearly 36 years, I am not so naive as to expect perfection or even anything close. But there are times when the immoral dimensions of Official Washington stand out in the starkest shades, not in variations of gray but in black and white.

Such was the gut-wrenching moment on Wednesday when Pvt. Bradley Manning, who exposed U.S. government war crimes and other wrongdoing, made a groveling apology for doing the right thing when there has been next to no accountability for the officials and their media collaborators who did innumerable wrong things. 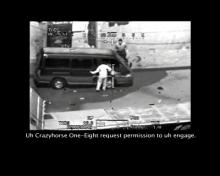 A scene from the “Collateral Murder” video in which an Iraqi man stops his van to aid those wounded in a lethal U.S. helicopter attack in Baghdad on July 12, 2007, only to be killed by the American gunners.

While no one in power seems to expect even an apology from let alone punishment of former President George W. Bush, Vice President Dick Cheney and their subordinates who facilitated acts of torture and who deceived the American people into an unprovoked invasion of Iraq, 25-year-old Bradley Manning finds himself having to beg for mercy to avoid what could be a 90-year prison sentence.

At his court-martial sentencing hearing, Manning’s attorneys presented the brave whistleblower as a psychologically confused young man who mistakenly thought he was doing something good when he was really doing something bad. They even released a photo of him dressed as a woman, setting the stage for Manning’s apology.

“I’m sorry that my actions hurt people,” Manning told the court martial judge. “I’m sorry that they hurt the United States. At the time of my decision, as you know, I was dealing with a lot of issues, issues that are ongoing and continue to affect me.”

But there has been no serious evidence that Manning’s disclosure of hundreds of thousands of classified U.S. government records “hurt people” and they only “hurt the United States” in the sense that many of Official Washington’s misdeeds and manipulations were exposed for the world to see. Some of Manning’s critics say U.S. diplomats now won’t be so forthcoming in describing these realities out of fear that some future Manning might do more leaking, but there’s no evidence of that either.

In contrast to the lack of evidence regarding harm, there were undeniable benefits to democracy and human rights from what Manning did reveal.  Manning’s documents provided the detailed “ground truth” that has enabled Americans to better understand what their government did in Iraq and Afghanistan and how grotesque many of those crimes were.

For instance, because Manning disclosed a classified videotape, we know that the much-heralded “successful surge” in Iraq in 2007 included the slaughter of innocent Iraqis walking down the streets of Baghdad as well as the slaying of a Good Samaritan who stopped his van, carrying his own children, in a vain attempt to help the wounded. The trigger-happy helicopter gunners killed the man and wounded his kids, too.

Manning’s leaks also revealed the U.S. government’s awareness of gross corruption in “allied” countries, such as Tunisia where the revelations helped spark an uprising that drove out a longtime dictator and gave Tunisians a chance at democracy.

Another important Manning disclosure, which may have deterred another catastrophic war in the Middle East, was how the U.S. government had manipulated the election of the new director general to the International Atomic Energy Agency. U.S. Embassy cables, exposed by Manning, showed that Japanese diplomat Yukiya Amano had been installed in 2009 as something of a U.S.-Israeli puppet.

The significance of this information was that, without it, Amano’s IAEA could have advanced the goal of Israeli leaders and U.S. neoconservatives for war with Iran over its nuclear program by exaggerating the danger. That propaganda strategy was undercut by Manning’s revelation that Amano was not only installed by the U.S. government but was meeting secretly with Israeli officials, ironically with Amano raising no complaints about Israel’s own rogue nuclear arsenal.

When the cables about Amano came out a year after his appointment, Amano’s IAEA was busy feeding the hysteria over Iran’s nuclear program with reports that were trumpeted by major U.S. news outlets. IAEA’s alarm undercut Iran’s denial about building a bomb and a 2007 U.S. intelligence estimate which concluded that Iran had stopped work on a bomb in 2003.

So, I found it useful to examine the detailed documents regarding Amano’s election. What those classified State Department cables showed was that Amano credited his election largely to U.S. government support and then stuck his hand out for more U.S. money. Further, Amano left little doubt that he would side with the United States in its confrontation with Iran.

According to U.S. embassy cables from Vienna, Austria, the site of IAEA’s headquarters, American diplomats in 2009 were cheering the prospect that Amano would advance U.S. interests in ways that outgoing IAEA Director General Mohamed ElBaradei wouldn’t.

The appreciative Amano informed Pyatt that as IAEA director general, he would take a different “approach on Iran from that of ElBaradei” and he “saw his primary role as implementing safeguards and UNSC [United Nations Security Council]/Board resolutions,” i.e. U.S.-driven sanctions and demands against Iran.

Amano also discussed how to restructure the senior ranks of the IAEA, including elimination of one top official and the retention of another. “We wholly agree with Amano’s assessment of these two advisors and see these decisions as positive first signs,” Pyatt commented.

In return, Pyatt made clear that Amano could expect strong U.S. financial support, stating that “the United States would do everything possible to support his successful tenure as Director General and, to that end, anticipated that continued U.S. voluntary contributions to the IAEA would be forthcoming. Amano offered that a ‘reasonable increase’ in the regular budget would be helpful.”

Pyatt learned, too, that Amano had consulted with Israeli Ambassador Israel Michaeli “immediately after his appointment” and that Michaeli “was fully confident of the priority Amano accords verification issues.” Michaeli added that he discounted some of Amano’s public remarks about there being “no evidence of Iran pursuing a nuclear weapons capability” as just words that Amano felt he had to say “to persuade those who did not support him about his ‘impartiality.’”

In private, Amano agreed to “consultations” with the head of the Israeli Atomic Energy Commission, Pyatt reported. (It is ironic indeed that Amano would have secret contacts with Israeli officials about Iran’s alleged nuclear weapons program, which has yet to yield a single bomb, when Israel possesses a large and undeclared nuclear arsenal.)

In a subsequent cable dated Oct. 16, 2009, the U.S. mission in Vienna said Amano “took pains to emphasize his support for U.S. strategic objectives for the Agency. Amano reminded ambassador [Glyn Davies] on several occasions that he was solidly in the U.S. court on every key strategic decision, from high-level personnel appointments to the handling of Iran’s alleged nuclear weapons program.

“More candidly, Amano noted the importance of maintaining a certain ‘constructive ambiguity’ about his plans, at least until he took over for DG ElBaradei in December” 2009.

In other words, Amano was a bureaucrat eager to bend in directions favored by the United States and Israel, especially regarding Iran’s nuclear program. Amano’s behavior surely contrasts with how the more independent-minded ElBaradei resisted some of Bush’s key claims about Iraq’s supposed nuclear weapons program, correctly denouncing some documents as forgeries.

The Amano cables, which Manning supplied to WikiLeaks, were first spotlighted by the U.K. Guardian in 2010. However, because the full cables were posted on the Internet, I was later able to dig through them to find additional details, such as Amano asking for more U.S. money.

Without this level of “ground truth,” Americans would be at the mercy of the major U.S. news media, which seemed as much on board for a war with Iran as it was for war with Iraq. The major U.S. news outlets have ignored the cables about Amano and continue to present him and his IAEA as honest brokers regarding Iran’s nuclear program. But millions of Americans know better because of Pvt. Manning’s selfless disclosures.

Thus, the depth of gratitude for Manning’s actions should run deep. Indeed, it is hard to calculate how many lives his disclosures may have saved and how many mistakes he has helped the United States avoid. In a moral society, he would be hailed as a national hero, rather than face prosecution and be forced to humiliate himself in a desperate bid to avoid spending the rest of his life in prison.

This injustice becomes even starker when you watch the choreographers of George W. Bush’s torture policies and the architects of his Iraq War go free. Or when you see the key “journalists” who facilitated the Bush-Cheney crimes remain in high-paying and high-profile jobs.

After taking office, President Barack Obama let these war criminals and their accomplices evade accountability with his infamous dictum about “looking forward, not backward.” Yet, the ultimate hypocrisy in the case of Bradley Manning is that Obama’s leniency only seems to apply to the war criminals, not to the truth-tellers who expose the war criminals.

← A Method to Egypt’s Madness
The Permanent ‘War on Terror’ →