Exclusive: As the Syrian civil war drags on, al-Qaeda and other Islamic extremists are emerging as the fiercest fighters in the rebel coalition and complicating how the conflict can be resolved. So, U.S. neocons are trying to pin the blame on President Obama, writes Robert Parry.

The neocons, who provided the propaganda framework for the disastrous Iraq War, are creating a new and dangerous conventional wisdom on Syria, blaming the emerging hardline jihadist dominance of the anti-government opposition on President Barack Obama’s failure to intervene militarily much earlier.

Official Washington is now awash in the message that Obama’s grudging agreement to deliver some light weapons to non-Islamist rebels is a case of “too little, too late.” A corollary of this neocon analysis is that only a much more aggressive U.S. military policy, including air strikes against Syrian government targets, can now salvage the situation by forcing President Bashar al-Assad into negotiations preconditioned on his surrender. 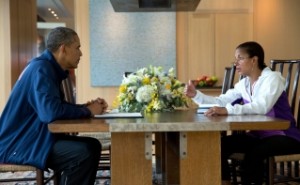 In other words, the neocons, who survived the Iraq War debacle with amazingly little harm to their standing within the Establishment, are offering their usual response to every political crisis in the Muslim world: U.S. military intervention and forced “regime change” of a leader deemed hostile to Israel.

However, the neocons are again living in their own reality. The truth is that it has been the Syrian opposition that has been the chief obstacle to peace negotiations, not Assad’s government. Earlier this year, talks scheduled for Geneva were blocked not by Assad, who agreed to participate, but by the opposition, which insisted on a fresh supply of weapons and a delay until rebel forces had reversed their recent string of military defeats.

Even earlier, however, when the rebels seemed to have the upper hand in the conflict, they showed little interest in a negotiated, power-sharing agreement. Then, the rebels were set on an outright defeat of Assad’s government and rebuffed Assad’s overtures of constitutional and political reforms.

That is not to say that Assad’s military did not respond to the civil unrest in 2011 with excessive force or that the Assad dynasty has not been among the most unsavory Arab dictatorships over the decades. The Assads, like Iraq’s Saddam Hussein, have represented some of the worst examples of repression in a region that has been long known for repression.

However, as with Iraq’s Hussein, the U.S. news media has painted the Syrian situation in blacks and whites. The opposition is noble and the government is evil. Every extreme claim about Assad, as with Hussein, is accepted as fact with almost no skepticism allowed. That pattern of journalistic malpractice contributed to the unprovoked U.S. invasion of Iraq in 2003 when little credence was given to Iraq’s denials that it possessed weapons of mass destruction.

Hussein also received little credit for maintaining a secular government that cracked down on Islamic extremism. Instead, President George W. Bush’s administration sold to the U.S. news media the myth that Hussein was ready to share WMDs with al-Qaeda. It was only after Bush’s invasion and the failure to find the WMDs that Iraq did become a home for al-Qaeda extremists and the U.S. press corps came to understand how the neocons had sold a false bill of goods.

But that awareness has slipped away as neocon commentators still dominate the op-ed pages and the think tanks, enabling them now to define the parameters of the debate over Syria.

It has long been central to the neocons’ geopolitical strategy to seek “regime change” in Muslim countries that are considered hostile to Israel and by doing so to undermine Israel’s close-in enemies, Lebanon’s Hezbollah and Palestine’s Hamas. The neocon thinking was that if pro-U.S. governments could be installed in Iraq, Syria and Iran, then Israel would have a freer hand to dictate a final “peace” to the isolated Palestinians, who would have little choice but to accept the final borders demanded by Israel. [See Consortiumnews.com’s “The Mysterious Why of the Iraq War.”]

However, the neocons have operated with a cartoonish view of the Muslim world. They have shown no sophistication about how the geopolitics of their schemes might actually play out.

For instance, their dreams about the Iraqis welcoming U.S. invaders as “liberators” didn’t exactly go that way. Ultimately, a Sunni autocrat (Hussein) was replaced by a Shiite autocrat (Nouri al-Maliki) with Iran gaining more influence than the United States, the erstwhile occupying power. Similarly, the overthrow-murder of Libya’s secular dictator Muammar Gaddafi a bloody demise cheered by the neocons has created new space for Islamic militants to expand their influence in northern Africa.

The neocons’ only real argument for “success” is that their mischief-making over the last decade has inflicted so much violence and destruction in the Muslim world that the region’s wealth and unity has been sapped, thus limiting how much support can be provided to the embattled Palestinians.

Likewise, the shattered nation of Syria is now preoccupied with its own devastating civil war, leaving little time and money to bolster the Palestinians. But the neocon strategy to press for a military victory over Assad also carries grave risks. The Sunni-led rebellion against Assad, an Alawite representing a branch of Shiite Islam, has been an invitation for al-Qaeda militants to cross the border from Iraq into Syria, a move that was inevitable whether Assad surrendered or resisted.

Perhaps the best hope for Syria would have been for the opposition to have entered into serious power-sharing negotiations in 2011, but then the scent of outright victory was too strong. The opposition’s hubris urged on by American neocons who smelled Assad’s blood overwhelmed any thoughts of reconciliation. The view was that the only viable solution required ousting Assad and eradicating any remnants of the Assad dynasty.

But that uncompromising position spread fear among many of Iraq’s Alawites, Shiites and Christians who foresaw possible revenge from Sunni extremists. The hardline rebel stance also forced the Assad regime to stiffen its spine and push back against the gains of the rebels. The prospect of another “Western-engineered” ouster of an Arab leader following the violent “regime change” in Iraq and Libya also raised alarms in Iran and Russia as well as inside Lebanon’s Hezbollah Shiite militias.

Iran and Russia stepped up military supplies and Hezbollah dispatched reinforcements, enabling Assad’s forces to gain the upper hand. That, in turn, drew in even more al-Qaeda and other Sunni militants. Journalists from the region are now reporting that these extremists have emerged as the dominant military force among the rebels.

Anne Barnard and Eric Schmitt reported for the New York Times that “As foreign fighters pour into Syria at an increasing clip, extremist groups are carving out pockets of territory that are becoming havens for Islamist militants, posing what United States and Western intelligence officials say may be developing into one of the biggest terrorist threats in the world today.”

Similarly, Liz Sly reported for the Washington Post that “A rebranded version of Iraq’s al-Qaeda affiliate is surging onto the front lines of the war in neighboring Syria, expanding into territory seized by other rebel groups and carving out the kind of sanctuaries that the U.S. military spent more than a decade fighting to prevent in Iraq and Afghanistan.”

So, like a case of the Sorcerer’s Apprentice, the neocons have helped whip up another new flood of trouble in the Middle East. But the neocons are not about to accept blame for the mess that is now sloshing around Syria. Thus, an alternative narrative is necessary: that it’s all President Obama’s fault for not committing the U.S. military to another invasion of a Muslim nation.

That is indeed the new conventional wisdom spreading across Official Washington: If only Obama had dispatched the U.S. Air Force to shoot down Syrian planes and bomb government troop positions while also arming the anti-Assad rebels with modern weapons all would be well. The opposition would have prevailed and a pro-Western (and pro-Israeli) democracy would be governing Syria.

Instead, according to this conventional wisdom, Obama dithered, dragging his heels on committing U.S. warplanes and weapons, even now only approving some light weapons if they can be channeled to carefully vetted moderate elements of the opposition.

But the neocon narrative ignores how messy and how dangerous a violent overthrow of another Arab government would have been. There would have been no assurance that the Sunni-led rebels would not have taken bloody revenge on the Alawites, Shiites and Christian sects that have been the backbone of Assad’s regime.

There likely would have been Libyan-style chaos with Islamic militants still swarming into Syria to fill the political void. Indeed, the outcome might well have been the establishment of an Islamist regime representing the country’s Sunni majority, replacing the relatively secular Assad government backed by the various Muslim and Christian minorities.

If indeed such an expectation would have been more realistic than the neocons’ rosy scenario, Obama could be criticized more for his failure to press the Syrian rebels into accepting some power-sharing compromise with Assad’s forces in 2011 or 2012 when the opposition’s prospects were brighter.

However, Obama was involved in a bitter reelection battle with Republican Mitt Romney, who was assiduously courting the Israelis and portraying Obama as lacking sufficient ardor for the Jewish state. By the time Obama was sworn in for a second term in 2013, the battlefield had begun to swing toward Assad’s advantage.

When the Obama administration did begin a push for a negotiated settlement this year, Assad was quick to agree but the splintered rebel coalition balked, demanding instead an escalation of military support from the West so the war could be tilted again into the rebels’ favor.

That wishful thinking, however, has expanded the opening for al-Qaeda and other Sunni extremists, a development that was always predictable but one that the neocons don’t want blamed on them. Thus, the new conventional wisdom pinning the evolving Syrian disaster on Obama.