From the Archive: American rightists and many Republicans continue to treat President Obama with a personal disrespect that reeks of racism: hoisting signs about his “Kenyan birth,” laughing at him as a rodeo clown, wishing for his impeachment hostility that recalls the reaction to other African-American “firsts,” Robert Parry wrote last May.

In telling the story of Jackie Robinson’s personal challenge breaking baseball’s color barrier in 1947, the movie “42” does not air-brush the ugliness of how the United States reacted to the integration of its “national pastime.” But one has to wonder if there will be “44,” a movie recognizing how racism has surrounded Barack Obama’s breaking of an even bigger color barrier as the 44th president of the United States.

What was impressive about “42” was that the movie took you back in time a not-all-that-distant past, certainly a recognizable America when hurling racial epithets at a black man was considered acceptable behavior by many baseball fans. The behavior is jarring to today’s audience but surely not unbelievable. 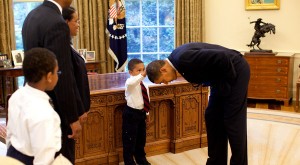 President Barack Obama, bending over in the Oval Office so boy can touch his hair and see that it’s just like his. (White House photo by Pete Souza)

Many of us lived through the days when our black-and-white TVs showed white protesters heckling black children integrating all-white schools; when Southern states still had their “white only” toilets and water fountains; when using the “n-word” was common even among many white Northerners.

So, seeing fans and other players baiting Jackie Robinson with various slurs in “42” fit with what we knew about those times. But it wasn’t just the audible taunts from overt racists that were troubling but the collective booing that Robinson endured when he came up to bat. It was disturbing how otherwise normal people could be pulled into such expressions of hatred toward a visiting ballplayer with dark skin.

There were, of course, other storylines in “42”: the courageous stand taken by Brooklyn Dodgers general manager Branch Rickey in defying the white-only traditions of Major League Baseball and the supportive behavior of some of Robinson’s teammates who stood by him in defiance of the verbal abuse.

The movie also has a satisfying ending in which Robinson emerges as a genuine American hero honored today as entire teams celebrate the anniversary of his entrance into the league by all wearing “42” jerseys. Robinson’s racist detractors are viewed historically as disgraced figures.

Yet, what has been remarkable about the Barack Obama story is that not only have right-wingers subjected him to racially coded slights questioning his birthplace, calling him “Muslim” and challenging his legitimacy as president but even some progressives and centrists feel free to insult him.

Though most of these detractors would insist that they are not disparaging Obama because he’s black and some would claim that their ease in disparaging him is somehow proof that they are not racist he has undeniably been treated with extraordinary disrespect, far out of line from his performance as president, especially one who was left with the burden of two unfinished wars and a broken economy.

And the insults haven’t stopped. Some Republican leaders, who winked and nodded at the “birther” slurs, are now suggesting that Obama should be impeached or at least ignored for the next three years because of a few petty “scandals” that the Republicans have ginned up all the better to prove to their “base” that he was never fit to be president in the first place.

And it’s not just the Right. Some on the Left and in the Center are ruder toward Obama presumably because he has failed to meet some especially high standard than they were even to catastrophic presidents like George W. Bush.

Though many of these progressives, liberals and centrists won’t admit it now, they were somewhat intimidated by the nastiness of the right-wing machine that demanded respect for Bush’s “legitimacy” even though he lost Election 2000 and had to be installed by his brother’s friends in Florida and his father’s friends on the U.S. Supreme Court.

Newspapers, including the New York Times and the Washington Post, fell over themselves in pretending that Bush really did prevail in Florida although their own unofficial recount determined that Al Gore would have won if all ballots considered legal under Florida law were counted. [For details on the recount, see Neck Deep.]

Even as President Bush stumbled over his words and gave speeches that bordered on incoherence, he still got more respect than Obama, whose oratorical skills are as impressive as the baseball talents that Jackie Robinson displayed on the field.

Still, some columnists, such as the New York Times Maureen Dowd, have found endless numbers of contradictory reasons to fault Obama’s performance. In one column, Obama will be blamed for not schmoozing enough with Republicans (he’s “President Standoffish”); in another, he’s not enough of a bully; in yet another, he’s not connecting with the important people of Washington, presumably including Dowd.

In her April 20 column entitled “No Bully in the Pulpit,” Dowd concluded, after the failure of gun control legislation in the U.S. Senate, that “Unfortunately, he still has not learned how to govern. [H]e doesn’t know how to work the system. And it’s clear now that he doesn’t want to learn, or to even hire some clever people who can tell him how to do it or do it for him.”

Obama’s “failure” on gun control was explained as a failure to twist arms (as well as his failure to charm the Republicans). Left out of this equation was the obvious reality that the Republicans remain determined to destroy Obama’s presidency and that the National Rifle Association won’t let anyone pry Congress from the NRA’s cold dead hand.

Dowd’s sophomoric comparisons to Lyndon Johnson’s success in pushing through important social legislation in the 1960s miss the equally obvious facts that the Democrats then had overwhelming majorities in the House and Senate and that the Republicans included many moderates who favored effective governance.

Dowd doesn’t seem capable of placing blame on Republican obstructionism or noting how the GOP won’t be moved regardless of how nice or how rude Obama is. In my view, one of Obama’s biggest mistakes in 2009 was his time-wasting courting of Republican “moderate” Sen. Olympia Snowe on health-care reform. She still voted no.

In the commentaries on Obama, Dowd writes as if she were attending a Brooklyn Dodgers away-game in 1947 and decided that the fans were booing because Jackie Robinson was batting under .300 in his rookie season. But perhaps most offensive is Dowd’s nastiness toward Obama’s character. Her tone has the unmistakable attitude of elite racism.

In a May 25 column, Dowd fawningly quotes historian Robert Draper making some clever but facile contrast between Bush-43 and Obama-44. As Dowd and Draper visited Bush’s new library together, Draper says: “So 43 grew up entitled but could display a commoner’s touch, while 44 grew up hardscrabble yet developed this imperial mien. The former is defined by incuriosity, the latter by self-absorption. They can each make you kind of miss the other.”

Apparently, neither historian Draper nor columnist Dowd can put Obama in the historical context of his not only being the first African-American president but his having grown up in societies both the United States and Indonesia where a mixed-race son of a white woman was frowned upon or worse.

People who knew his mother in Indonesia have commented about how the young Obama behaved stoically when he was insulted on the streets of Indonesia and even pelted with stones. The racial discrimination may have been more subtle in the United States but no one can be so dense as to not understand the ingrained racist attitudes in this country as well.

Many youngsters would burn with deep resentment toward such treatment or they would be diminished by it but Obama has always managed to restrain himself and rise above the abuse. Though he is a proud and accomplished man, he has never stooped to the level of his detractors.

When he has shown flashes of anger, such as when he skewered the billionaire bigot Donald Trump at the 2011 White House Correspondents Dinner, he has done so with style and humor. Obama doesn’t appear to hold a grudge even when he has every right to, apparently a lesson of a young black man growing up in an America that often puts angry young black men in prison.

When I think of Obama, I also recall the resentment that Boston Celtics great Bill Russell still feels toward the city where he won basketball championships year after year. Russell’s lingering anger seems directed mostly at the white Boston press and with good reason.

In 1966, after Russell was named the Celtics player-coach the first African-American coach in the National Basketball Association one clueless reporter disproved the old maxim that “there are no stupid questions, only stupid answers.” The reporter asked Russell if, as a black man, he could treat white players fairly or whether he would engage in reverse discrimination.

Russell answered the question politely, assuring the moron that he would have no problem treating black and white players equally. Why this question was truly stupid and indeed racist was that no white reporter would have thought to ask a white coach if he could treat his black players fairly.

There is a similarity in how white commentators, like Maureen Dowd, write about Obama. He is held to some weird standard of perfection that would never be applied to a Ronald Reagan or a George W. Bush plus the racial factor of Obama’s detractors is whited-out of the story.

In behaving this way, Dowd may think she is looking beyond the long and dreary history of American racism, but she is really just another white journalist missing the most important part of the Obama narrative: how he is one more in a long line of gifted black Americans the political equivalent of Jackie Robinson and Bill Russell who must not only overcome the challenges of a difficult job but must do so while white people act as if being black in America is no big deal.