Sailing against a strong prevailing wind is not easy, certainly not like breezing along with the wind to your back. Author Alan Hart discovered that truth in criticizing Israel’s treatment of the Palestinians, but his acceptance of defeat should not stop others from advocating for truth and justice, says Lawrence Davidson.

Alan Hart is an author and a journalist, the former Middle East Chief Correspondent for Britain’s Independent Television News and a former BBC Panorama presenter whose beat was the Middle East. He has written a number of books, including Arafat: Terrorist or Peacemaker? (1984) and the three-volume Zionism: The Real Enemy of the Jews (2009-2010).

He is also a longtime activist for various causes, particularly his three-decade struggle on behalf of justice for the Palestinian people. 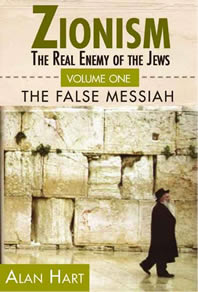 Volume One of Alan Hart’s trilogy, “Zionism: The Real Enemy of the Jews.”

On April 25, Alan Hart literally turned in his resignation letter. In it he states, “I am withdrawing from the battlefield of the war for the truth of history as it relates to making and sustaining of the conflict in and over Palestine.” Why did he do this? In Hart’s opinion, the struggle for justice in Palestine is “mission impossible.” [See Consortiumnews.com’s “Pursuing Truth about Israel/Palestine.”]

The information/propaganda war between Zionists and those, such as himself, supporting the Palestinians (which, in any case, had always been “the most asymmetric of all information wars”) is lost. He notes that the Western media still follow a Zionist line and asserts that most of the Western populations remain either pro-Israel or indifferent to the Israeli-Palestinian struggle.

Hart blames this alleged Zionist victory in the propaganda war on a lack of financial support for those trying to write and speak out for Palestinian justice, and contrasts their plight to the situation of the Zionist writers and advocates, who enjoy almost unlimited funds.

Hart feels it is mainly wealthy Palestinians and other Arabs who have failed to support pro-Palestinian activists. These wealthy Arabs have failed to step forward because they either are afraid of Zionist retribution that would damage their businesses or careers, or are afraid of their own Arab governments, which do not want trouble with Israel because of assertive actions by pro-Palestinian wealthy citizens.

With all due respect to Mr. Hart, who certainly does deserve our respect, I can’t help asking myself whether his assessment of this “war for the truth of history” is objectively true or an expression of personal disappointments. According to his own explanation, his decision to leave the struggle is connected to the fact that Arab publishers and media failed to financially support and promote his recent book Zionism: The Real Enemy of the Jews.

This was a great disappointment to him because the Arab media had serialized his prior work on Yasser Arafat and this had brought him “a significant income.” He had obviously made the assumption that the situation would repeat itself.

So strong was that expectation that, as Mr. Hart tells us in his resignation statement, he made certain decisions, such as mortgaging his property in order to support the production of the Zionism study, which have now brought him into financial distress. Hart appears to see the failure of Arab money to come to his assistance as indicative of Arab failure to support the Palestinian cause.

As disappointing as the Arab failure to promote Hart’s important work on Zionism may be, it is not accurate to conclude, as Hart does, that most wealthy Arabs “do not care about the occupied and oppressed Palestinians.” Before the first Iraq war, both public and private Arab money generously supported the PLO. Yasser Arafat’s attempt to mediate that conflict and prevent a war against Iraq stopped most (but never all) of that support.

Whether the wealthy Arabs could now do much more is another question. However, and this is an important point, this is not the same question as to whether Western supporters of the Palestinian cause should or should not give up.

Hart is correct that in the past 30 years supporters of Palestinian justice have not been able to create the necessary critical mass of public opinion to change the policies of national governments. However, that does not mean there has been no progress. It does not mean this is a lost cause.

I, too, have been a strong supporter of the Palestinians for decades, and I have seen a tremendous difference over time. Thirty years ago you could not critically raise the subject of Israel in public, and thus the Zionists had a monopoly on the entire history of this issue. That is emphatically not the case today.

Despite Alan Hart’s unfortunate experience, the fact is that, at a popular level, the Zionists have lost control of the Palestine narrative. There are other real positive signs in this struggle that Hart fails to mention, including the progress of the Boycott Divestment and Sanctions (BDS) movement; the continuing maturation of counter-lobbies, particularly in the United States; and the growing worldwide recognition of Israeli criminality, which has slowly increased that country’s sense of isolation. In other words, there is more to this than the Arab failure to support Mr. Hart’s latest work.

One has to also understand that success and failure come on many levels. On the macro level, progress is slow, but as pointed out above, it is far from nonexistent. Sometimes you just need to know where to look to see the ongoing activity.

For instance, in the case of the United States, there are a growing number of organizations that are constantly busy getting out the message of Israeli crimes and the Palestinian demand for justice. There are the U.S. Campaign to End the Israeli Occupation (a coalition of almost 400 member groups and organizations), Jewish Voices for Peace, and the Council for the National Interest, to name just a few.

The struggle against Israeli apartheid might well be, as it was in the case of South Africa, multigenerational. But among the many organizations waging this struggle there is no sign of slacking.

On the micro level, success comes when one is consistently true to one’s principles in a manner that is personally acceptable. No one is asking Western supporters of the Palestinian cause to go bankrupt or put themselves in physical danger, although in the latter case notably heroic individuals such as Rachel Corey and Tom Hurndall have chosen to do so, with tragic results.

However, there are less dangerous routes. To do what you can in a steady, consistent way for a just cause in which you believe is already to have achieved success at the personal level. We struggle not only for the cause, but also because of who we are.

Alan Hart is an admirable man who has done admirable things, and we all owe him our thanks for his contributions to the Palestinian cause. But his decision to retire from the field should in no way be taken as a sign that that cause is lost. It is emphatically not lost. It has made significant progress over the past three decades and it is well positioned to make more progress in the future.

11 comments for “The Sad Lesson of Alan Hart”