Many of the U.S. problems in Afghanistan stem from a misguided relationship with pro-Islamist elements of Pakistani intelligence dating back to the 1980s. But Pakistan’s recent election offers new hope if Official Washington can step back and see the bigger picture, writes ex-CIA analyst Paul R. Pillar.

The victor in the recent Pakistani elections, Nawaz Sharif, has indicated he places high priority on improving relations between Pakistan and India.

Sharif made some significant strides in promoting detente between the two South Asia powers during a previous stint as prime minister, and he wants to recoup ground that was later lost after the terrorist attack in Mumbai in 2008 by a Pakistani-based group. Wasting no time, Sharif has invited Indian Prime Minister Manmohan Singh to Pakistan to attend Sharif’s swearing-in. 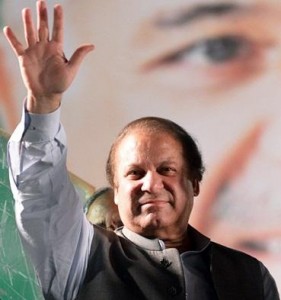 Former Prime Minister Nawaz Sharif, the apparent winner of Pakistan’s parliamentary elections on May 11, 2013. He is expected to serve as the nation’s next prime minister.

This is all to the good, and has received recognition as such in India (although with caution in the case of the right-wing nationalist Bharatiya Janata Party). Americans, however, need to be prepared for how a successful Sharif may bring about some changes in Pakistani-U.S. relations that may not seem so good in Washington.

This is suggested by an editorial earlier this week in a major Indian daily, the Hindustan Times. The editorial said that part of what Indians ought to hope for from a new administration in Islamabad is “a government that will understand that cutting dependence on the United States and China is only possible if Pakistan has a modus vivendi with India.”

Sharif is indeed likely to do a good number of things that will not sit well in Washington. Some of these things he would be doing anyway, but some of them will be related to his attempted rapprochement with India.

The political realities he faces include, besides the Islamist militants who have become a bigger part of Pakistani affairs in recent years, a Pakistani military that ended his last prime ministry with a coup and whose main reason for existence is to defend the country against arch-adversary India.

There will be a tendency in Washington to judge Sharif’s performance piecemeal, involving whatever is the latest concern about security in northwest Pakistan or something else. It would be better to take a more strategic view with the big lines of conflict in South Asia in mind.

Indian-Pakistani rapprochement is still worthwhile and very much in U.S. interests, even if it is accompanied by greater nationalist testiness in U.S.-Pakistani relations. It is worthwhile partly because stability in the relationship between the region’s two nuclear-armed powers is important in its own right. It also is worthwhile because improvement in that relationship will make it easier for Washington to deal with some other regional issues important to it.

The most prominent of those issues involves Afghanistan. The background to just about every Pakistani policy and action about Afghanistan that is unhelpful, including ones involving the continued Pakistani relations with the Afghan Taliban, is Pakistani concern about India.

To Pakistan, Afghanistan is its strategic depth in the standoff with India, and it gets apoplectic over any inroads that India itself makes in Afghanistan. The more that the Indian-Pakistani relationship improves, the less intense will be the apoplexy and the less troublesome a player Pakistani is likely to be on issues involving Afghanistan.