From CNN to the Washington Post, the mainstream news media is abuzz about “the trifecta of scandals” besetting the Obama administration, a narrative that fails to assess the actual significance of the three “scandals.” They don’t measure up to the many important scandals that the media neglects, says Beverly Bandler.

Appropriate questions should be asked and answered about the controversies over the IRS screening of 501-c-4 applications, the subpoenas for AP phone calls, and the Benghazi attack. Abuse of power should be checked with vigor, but hysteria should be avoided. These issues require calm and reasoned perspective. Outrage should be reserved for real scandals of which there are plenty.

However, as some commentators rush to judgment especially about the IRS “scandal,” a review of some genuine scandals past and present may be in order: 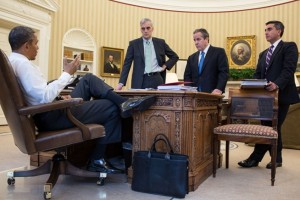 A real scandal is the lying to the American people by George W. Bush and his administration about non-existent WMD that led us into the illegal and immoral Iraq War (and the related scandals of torture, GuantÃ¡namo, Abu Ghraib, and Afghanistan). Bush’s actions caused hundreds of thousands of deaths, millions of horrific injuries and the destruction and destabilization of Iraq. The United States will pay for that scandal for generations, not only in money but in loss of respect.

A real scandal is the complicity of Ronald Reagan in “grotesque human rights crimes including genocide in Central America, his tolerance of drug trafficking by his anticommunist clients, and his support for sophisticated propaganda operations to destroy troublesome journalists and other investigators,” as journalist Robert Parry reported after Reagan’s ally, ex-Guatemalan dictator Efrain Rios Montt, was found guilty of genocide in an extermination campaign backed by Reagan in the 1980s.

A real scandal is the extent to which radical right-wing conservatives have managed to corrupt, to some extent, every single agency in the Executive Branch, for instance: restrictions placed on the Center for Disease Control by the National Rifle Association, the constant right-wing threats against the Environmental Protection Agency, and the latest threat of the GOP to render the National Labor Relations Board inoperative. There’s also been the ideological corruption of the Judicial Branch.

A real scandal is the magnitude of air and water pollution across the nation along with worsening threat of global warming, while government efforts to address these problems are obstructed by GOP corporatists.

A real scandal is the conservatives’ use of one “study,” the Reinhart/Rogoff report to push for an austerity budget when the “study” has now been exposed as fraudulent and the austerity theory itself revealed to be fraudulent while the rich get richer and millions of Americans face long-term unemployment.

A real scandal is the extent of poverty in the United States with almost half of Americans dying close to penniless, in a nation in which the top one-hundredth of one percent average some $27 million per household while the average income for the bottom 90 percent is a little over $31,000.

A real scandal is how consistently the United States lags in international measurements for education (17th in the developed world) and for health care (37th out of 191 countries). Increasingly, ignorance shapes the national discourse with many Americans who rate the Benghazi case a major scandal not even knowing where it is.

A real scandal is the deliberate misinterpretation of the Second Amendment by the Right for political purposes and to serve the firearms industry, a distortion compounded the failure of the Left and centrist politicians to challenge the falsehoods. General citizens and corporate journalists apparently don’t read history and the Constitution or are unfamiliar with the English language.

A real scandal is the continued takeover of the United States political and economic system by the military-industrial complex and by corporations, a power grab facilitated by five right-wing justices on the U.S. Supreme Court and their 2010 decision in Citizens United v. Federal Election Commission. That decision also laid the groundwork for the current IRS “scandal” because so many right-wing groups rushed to exploit the 501-c-4 tax-exempt “social welfare” category to carry out their political agendas.

The “social welfare” category was established for civic leagues or organizations not organized for profit but operated exclusively for the promotion of social welfare. In 1959, under the administration of Dwight Eisenhower, the meaning of this section was changed dramatically when the IRS decided the word “exclusively” could, in effect, be read as “primarily.”

“For 54 years, the IRS has gotten away with the crime of changing the word ‘exclusively’ to ‘primarily,” said Lawrence O’Donnell on The Last Word  Monday. “The IRS took a hard, clear word like ‘exclusively’ and changed it into a soft word  ’primarily’ and then left it to the IRS agents to determine if your organization was primarily concerned  with the promotion of social welfare.”

Thus, when the Supreme Court issued Citizens United in 2010 — prompting a flood of new 501-c-4 applications —  some IRS bureaucrats sought ways to detect which of the applicants were likely exploiting the loophole. That led to the controversial use of word searches that were viewed as targeting Tea Party groups.

“The IRS does need some kind of test that helps them weed out political organizations attempting to register as tax-exempt 501(c)4  social welfare groups,” wrote Ezra Klein in the Wonkblog Monday. “But that test has to be studiously, unquestionably neutral.”

Another real scandal is why the perpetrators of the financial crisis that began in late 2007 have not been held accountable and when the evidence is clear why they have not been brought to trial. As Sen. Elizabeth Warren, D-Massachusetts, suggests, the banks and other guilty parties need to be taken to court.

A real scandal is how the GOP has been taken over by anti-democratic, anti-rational, anti-science, neo-confederate, nihilist, obstructionist, corporatist forces becoming a political party unlike one ever seen in U.S. history. Conservatism is one thing, crazy is another.

Former Republican Mike Lofgren describes the GOP as “less and less like a traditional political party in a representative democracy and … more like an apocalyptic cult,” one that is “ideologically extreme, scornful of compromise, and ardently opposed to the established social and economic policy regime.”

It is also a party of liars and one ruthlessly determined to destroy a president because he’s a Democrat along with the Democratic Party to impose an authoritarian, neo-fascist regime on the United States.

A real scandal is how the right-wing propaganda juggernaut has manipulated the corporate media and exploited American naivetÃ©, lack of information and fear, and how the listless Left with its “learned helplessness” has let right-wing extremists get away with it by failing to “step up to the plate” with an effective investment in public outreach.

Below, I have provided a list of links related to the IRS story. I don’t pretend to have them all, but have tried to provide a decent selection. ThinkProgress and Mother Jones are particularly informative and rational as usual. I hope they are helpful to you.

Oh, by the way, the Congressional Budget Office reports that the deficit “crisis” is solved for the next ten years. Now there’s a story.

4 comments for “The Lost ‘Trifecta of Scandals’”