The Washington press corps is in hot pursuit of “Obama scandals,” stampeding officials into various rushes to judgment while missing the bigger scandals underlying the excitement du jour, such as the systematic abuse of federal tax-exempt status for secret political donations, as William Boardman notes.

Karl Rove is the real poster boy for the so-called Internal Revenue Service “scandal” of mid-level functionaries taking a closer look at applications by political organizations seeking a 501(c)(4) tax status that makes them not only tax-exempt but protects their donors with anonymity.

That 501(c )(4) is one sweet deal: not only do these organizations get untraceable, tax-free money laundering for their political activities, they get a taxpayer subsidy to do it. It was not always such: some of these activities used to be illegal. 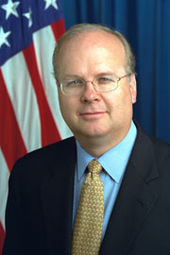 People working for the Committee to Re-Elect the President (CREEP) Richard Nixon’s campaign organization in 1972 were convicted of law-breaking, as were some corporate donors. CREEP was “illegally hauling in many millions of dollars from corporations, many of which felt pressured into making contributions,” wrote Jill Abramson of the New York Times in a 2010 article about the rapidly changing rules on political contributions.

“The fund-raising practices that earned people convictions in Watergate, giving direct corporate money to a campaign and doing so secretly, are back in a different form in 2010. This time around, the corporations are still giving secretly, but legally,” Abramson wrote.

“This election year is the first since the Supreme Court’s Citizens United decision, which allows corporations for the first time to finance ads that directly support or oppose political candidates. And tax laws and loopholes have permitted a shadow campaign network of Republican-leaning nonprofit groups to collect a flood of anonymous donations and spend it widely.”

Indeed, Abramson noted, “Some players shaking the corporate money trees for nonprofit groups this year cut their teeth in the Nixon re-election campaign. … There is Fred Malek, a founder of the American Action Network, [who] was the White House personnel chief in 1972 and helped dispense patronage for major Nixon donors as well as serving as deputy director of Creep. The American Action Network shares office space with American Crossroads, led by Mr. Rove, who also was an active participant in Nixon’s re-election as executive director of the College Republican National Committee.”

Early in 2010, Rove founded American Crossroads, a perfectly legal, openly political, tax-exempt 527 organization, with no limits on the amount or source of their contributions, and no spending limits. Despite these freedoms, 527s were still prohibited from openly supporting particular candidates, and they had to register with the IRS, disclose donors, and file reports.

The Problem: Some Transparency

These 527 organizations (a broad category that includes Super PACs) have been an open charade in the democratic process for years, avoiding direct support of candidates while producing material that could only support their chosen candidates. For example, the 527 organization Swift Boat Veterans for Truth attacked presidential candidate John Kerry during the 2004 election, without expressing direct support for President George W. Bush.

According to the Internal Revenue Code passed by Congress, 501(c)(4) status is reserved for “civic leagues or organizations not organized for profit but operated exclusively for the promotion of social welfare” [emphasis added]. In 1959, during the Eisenhower administration, the IRS decided to ignore the letter of the law, and wrote rules for 501(c)(4) organizations requiring only that they be primarily for the promotion of social welfare.

The difference between “exclusively” and “primarily” created a loophole even a non-lawyer could exploit, but it became most useful to $100 million outfits like American Crossroads only after the Supreme Court, with its January 2010, 5-4 decision in Citizens United (558 US 310), opened the American political process to virtually any money from any source, with almost no duty to disclose anything.

Similarly, the emergence of 527 organizations derived from another Supreme Court decision, Buckley v Valeo (424 US 1) in January 1976, representing the court’s pushback against federal election laws passed by Congress to address some of the recent Watergate abuses. Issued as an anonymous decision “by the court” (with two, opposing dissents), Buckley effectively gave money the same legal standing as speech, complete with First Amendment protection, albeit with some restrictions. Citizens United effectively removed those restrictions.

Since 2010, the IRS has faced an unexpected flood of applications for 501(c )(4) status from essentially political organizations of all stripes, but especially from conservative organizations. It’s hard to find anyone who argues that the IRS responded properly or effectively to this exigency, but it’s even harder to find anything but execrable reporting on it either, although there is some good work (by Chris Hayes, Lawrence O’Donnell, Jeffrey Toobin, among others).

Early reporting by the Associated Press on May 11 took the story off the rails in the first sentence by claiming that IRS “agents were targeting tea party groups as early as 2011,” attributing the claim to a partial draft of a leaked report, and then repeating the claim in the next sentence. The New York Time story the same day started with a misleading reference to “overzealous audits.”

The story got so distorted and detached from reality that even President Barack Obama in his May 13 remarks didn’t have much of a handle on it.

The first step toward understanding this IRS story is to realize that the issue of 501(c )(4) organizations carrying out political activities which should be illegal under federal law is a real problem and is widely recognized.

Senators Carl Levin, D-Michigan, and John McCain, R-Arizona, who co-chair an IRS oversight committee, released a statement on May 13, saying in part: “The Permanent Subcommittee on Investigations has been for several months examining on a bipartisan basis whether the IRS has adequately enforced rules regarding the extent to which tax exempt nonprofit 501(c)(4) groups engage in partisan politics. [emphasis added]

“We had tentatively planned a hearing on that issue for June. After Friday’s announcement that the IRS, to the extent it has been enforcing the law, may have done so in ways that singled out some groups for special scrutiny, we have determined that the subcommittee should investigate that additional issue as well. As a result, we have decided to delay our hearing in order to examine this issue carefully.”

In other words, the subcommittee’s concern was lax IRS enforcement against a perceived abuse of the tax code, and this concern is reality-based, even though McCain is quoted as talking about “audits” of tea party groups which is not part of the reality of this issue. There were no audits. There was an evolving and almost comically ineffectual effort by the IRS to sort out 501(c)(4) applications to reduce the number of political organizations seeking tax shelter as “social welfare” organizations.

By May 14, the basic reality of IRS behavior during 2010-2012, while it was still directed by a Bush appointee, still had not emerged. The director of the tax-exempt division of IRS said that about 300 applications for 501(c )(4) status were given special scrutiny, and of those about 75 were for “tea party” or similarly tagged organizations.

The IRS has not indicated who made the other 225 applications that got special attention, but they were apparently not conservative or tea party-like groups. According to the IRS, not one of the applications was denied. According to the head of the Kentucky 9/12 Project, his group refused to answer IRS questions and was approved anyway.

“There’s absolutely no targeting” of conservative groups, IRS Commissioner Doug Shulman testified to Congress in March 2012. Shulman is a former Bush appointee who completed his term in November 2012.

In a letter to Treasury Secretary Jack Lew on May 13, Sen. Marco Rubio, R-Florida, wrote, awkwardly, in part: “Furthermore, it is clear the IRS cannot operate with even a shred of the American people’s confidence under the current leadership. Therefore, I strongly urge that you and President Obama demand the IRS Commissioner’s resignation, effectively immediately. No government agency that has behaved in such a manner can possibly instill any faith and respect from the American public.”

Although there is no IRS Commissioner currently, Rubio’s office said the letter was referring to acting commissioner Steven T. Miller, who was Shulman’s deputy and who served as deputy commissioner for services and enforcement during the time alleged “targeting” took place. According to his official biography on the IRS website:

“He also provides the executive direction and leadership for the IRS Criminal Investigation Division, which investigates income tax evasion and related financial crimes; the IRS Office of Professional Responsibility, which administers the laws and regulations governing the practice of tax professionals before the IRS; and the IRS Whistleblower Office, which receives information on tax cheating and provides appropriate rewards to whistleblowers.”

Miller, a 25-year career employee of the IRS, published an op-ed article in the May 14 issue of USA Today, saying that “we should have done a better job,” adding:

“Mistakes were made, but they were in no way due to any political or partisan motivation. We sought to centralize work in this area in 2010 because our office of Exempt Organizations observed a sharp increase in the number of section 501(c)(3) and 501(c)(4) applications coming from groups potentially engaged in political campaign intervention. Between 2010 and 2012, the number of applications for 501(c)(4) status more than doubled, from 1,591 to 3,398.”

On July 7, 2011, Miller issued a memo that stopped an IRS effort to collect gift taxes from five major donors on their gifts to 501(c )(4) organizations such as Crossroads GPS or Priorities USA. The action to stop tax collection was taken in response to a written request to Shulman on May 18, 2011, from six Senators Orrin G. Hatch, Jon Kyl, Pat Roberts, John Cornyn, John Thune, and Richard Burr all Republicans.

In a story on Miller’s memo the same day, the New York Times reported: “The I.R.S. has said that the White House had nothing to do with its audits, and its original statement said they were begun by lower-level employees and that administration officials were not notified. Frank Keith, an I.R.S. spokesman, said Thursday that the estate and gift tax unit had in fact suspended those audits in March, although the agency’s initial confirmation of the audits did not mention any such action.

“‘All decisions to open, suspend and close the audits were made by career civil servants and were not the result of any outside influence,’ Mr. Keith said.”

Even before the final Inspector General’s report was released, Attorney General Eric Holder plunged into the melee, telling reporters on May 14 that, in regard to using “tea party” or “patriot” as search criteria: “The FBI is coordinating with the Justice Department to see if any laws were broken in connection with those matters related to the IRS. Those actions were, I think as everyone can agree, if not criminal, they were certainly outrageous and unacceptable. But we are examining the fact [sic] to see if there were criminal violations.”

Unlike the President the day before, the Attorney General did not allow for the possibility that the alleged behavior may or may not have happened as reported. Instead he rushed to judgment on actions of IRS functionaries in a way that he has conscientiously avoided when considering bankers or torturers.

And when the Justice Department and the FBI look for criminal violations, is there any likelihood they’ll probe the legality of any fundamentally political organizations getting the benefit of a tax subsidy and secrecy for their fanciful portrayals of “social welfare” organizations? [On Wednesday, President Obama announced that acting IRS commissioner Miller would resign as a result of the controversy.]

← The Great Benghazi Distraction
The Lost ‘Trifecta of Scandals’ →