Exclusive: Official Washington is captivated by the image of Obama “scandals,” including Benghazi talking points and extra IRS questions posed to Tea Party groups, but journalists are peering into the Right’s funhouse mirror which for decades has made big scandals small and small scandals big, says Robert Parry.

The modern American news media operates like a giant right-wing funhouse mirror reflecting back some large things as small and some small things as large. The Right gets to decide which items will be misshapen in which ways and the mainstream press then reinforces the distortions.

Though not very funny, this funhouse mirror has been in operation since at least the 1980s and is now so well established that most mainstream journalists and many politicians assume the exaggerations and minimizations are the way things really are. 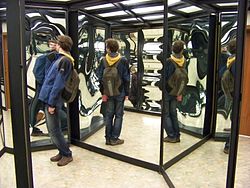 This funhouse effect was first noticeable during the scandals of Ronald Reagan, when it didn’t seem to matter how much evidence was compiled about his complicity in grotesque human rights crimes including genocide in Central America, his tolerance of drug trafficking by his anticommunist clients, and his support for sophisticated propaganda operations to destroy troublesome journalists and other investigators.

The Right, as it built this hall of mirrors during those years, was determined to transform Reagan’s shocking crimes into something insignificant. Meanwhile, careerists in the mainstream news media learned to behave as if these distortions were just normal, the way things should be seen. If you insisted the funhouse reflections weren’t real, you quickly became an outcast.

For instance, the New York Times’ Raymond Bonner detected politically motivated massacres in El Salvador, including the extermination of entire villages in the area of El Mozote, but the Reagan administration and its right-wing allies simply explained that there had been no massacres and that Bonner was just a biased reporter who needed to be removed, which he soon was.

You might think that a cover-up of mass murder in El Salvador as also was occurring in nearby Guatemala would be a big scandal, especially since President Reagan was facilitating the slaughters by providing modern equipment to the killers and by discrediting brave journalists who tried to reveal the truth. But that was not how things appeared in the funhouse mirrors of Official Washington. The troublesome reporters were just getting what they deserved.

Similarly, Reagan’s Nicaraguan Contra rebels appeared to human rights investigators and other independent observers to be thugs who swept through Nicaraguan towns killing peasants, torturing prisoners, raping women and engaging in a variety of practices that one might, in other circumstances, call terrorism. But reflected in the funhouse mirror, these ugly images were made to disappear, along with well-documented evidence of Contra cocaine smuggling.

Even when reality occasionally intruded on Official Washington with outside disclosures about Reagan’s White House illegally shipping weapons to the Contras (because one of the U.S. planes was shot down over Nicaragua) and about Reagan’s team paying for some of those weapons by secretly selling missiles to Iran (as  revealed by a Lebanese newspaper), the Iran-Contra scandal was quickly downsized into a legalistic dispute over whether it was ever okay to lie to Congress.

The mainstream Washington news media became so accustomed to the funhouse mirrors that when Gary Webb of the San Jose Mercury News revived the Contra-cocaine story in 1996, the big newspapers the New York Times, the Washington Post and the Los Angeles Times knew exactly what to do: reshape Webb from a respected investigative journalist into a conspiracy nut.

That distortion remained in place despite a CIA inspector general’s report that not only confirmed that the Nicaraguan Contras were deeply involved in the cocaine trade but that the Reagan administration knew about the problem and systematically covered it up. But Webb lost his job at the Mercury News, could not find a decent-paying position anywhere in journalism and, in 2004, committed suicide. [See Consortiumnews.com’s “The Warning in Gary Webb’s Death.”]

The funhouse mirror even affects how Official Washington understands historic scandals like the two October Surprise operations the one in 1968 when Richard Nixon’s campaign sabotaged President Lyndon Johnson’s Vietnam peace talks to give Nixon an edge in that tight election and the one in 1980 when Ronald Reagan’s campaign used similar tactics to frustrate President Jimmy Carter’s efforts to free 52 American hostages then held in Iran.

Again, no matter how much proof is piled up, Official Washington won’t see what’s lying there in front of it even though the two October Surprise cases also appear to have been the starting points for the Watergate scandal for Nixon and the Iran-Contra scandal for Reagan, respectively. [See Consortiumnews.com’s “Rethinking Watergate/Iran-Contra” or Robert Parry’s America’s Stolen Narrative.]

The Right’s funhouse mirror also means that tiny or fabricated scandals implicating Democrats and progressives are turned into something huge. When Bill Clinton was in office, it was Whitewater and “Clinton’s Mysterious Deaths.” After Barack Obama took office, it was “Fast and Furious,” the Benghazi talking points and now the Internal Revenue Service asking extra questions to Tea Party groups that wanted to get tax-exempt status.

Yet, even as the Republicans insist that the IRS asking Tea Party groups some extra questions is equal to or worse than Watergate, it’s been noted that Republican voiced no such protests in 2004 when George W. Bush’s IRS responding to Republican demands instigated a two-year audit of the NAACP and threatened to take away the historic civil rights group’s tax-exempt status because NAACP chairman Julian Bond had criticized Bush’s Iraq War and his trampling of the Constitution.

In other words, even in parallel cases (although asking a couple of dozen extra questions isn’t nearly as intrusive or expensive as a two-year audit), the funhouse mirror makes right-wing political groups the victims of “tyranny” under President Obama while the NAACP was just getting its comeuppance under President Bush.

But the larger question is: Can a democratic Republic long survive with such systematic distortions of reality. What will happen if one side of America’s political equation the Right continues to possess a vast and sophisticated media apparatus, a vertically integrated structure meshing newspapers, newsmagazine and books with radio, TV and the Internet in a synergy that spreads the right-wing message and maximizes profits, while the other side the Left has nothing comparable, just scattered and underfunded outlets that have to fend for themselves?

Compounding this situation is the fact that the careerist mainstream media knows that there’s no risk and a great benefit to leap onto the Right’s “scandal” bandwagons when they roll by and there’s virtually no upside and a big downside to report on real scandals that get in the Right’s way.

There have been too many good reporters, like Raymond Bonner and Gary Webb, crushed under the wheels of the right-wing juggernaut. For average Americans, the only advice is that they must realize that they are inside a media funhouse and that the mirrors don’t reflect the real story.